Dear forumites,
Does anyone know the state of his health? I am very concerned about the letter he penned for Marianne.
Hal E.
Top

I choose to put his words in perspective, these words were meant as consolation to a loved one and are true in a way that at his age the future is relatively short and the past long(er).
Let's hope that Leonard can be in good health with us at least as long as his dear friend Roshi.
Lille 2010, Dublin 2012, Mannheim 2013, Rotterdam 2013, Montréal 2017
Happiness is just the side effect of a meaningful life.
Top

A bit of alarm at those words was also my first and automatic response.
However in the absense of any real information I choose to assume that Leonard is fine, physically and mentally.
It's psychologically healthy for people as they age to be at ease with the inevitability of death , even though there is no immediate , definable threat to life other than 'being old'
This piece is well put :
https://inews.co.uk/opinion/clive-james ... ity-death/
Leonard's work resonates
Brighton 1979; Dublin , Manchester june 2008; glasgow, manchester Nov 2008; Liverpool july 2009 ; Barcelona Sept 2009 ;marseille, lille september2010: Ghent August 2012;Barcelona October 2012;Montreal x2 November 2012: 2013; Saint John NB April 2013; Brussels June 2013;Manchester August 2013; Leeds , Birmingham September 2013; Amsterdam September 2013
Top

I dearly hope it was meant as a consoling figure of speech. Truth is nobody knows when the time will come, yes? The thought of losing Leonard is indeed dark. We know some day it must happen. I hope not anytime soon. Let us properly value him while he is still here among us, lighting the way. I had never truly considered this before, more than in theory, so the shock is with me still. I feel moved to prayer.
Top

I don't like the subject of my friend Leonard succumbing to his will.
Top

I don't know how to process my feelings about Leonard's health in light of the New Yorker article. He is clearly on a journey toward a destination that is drawing closer. I am not a friend or family member and have no right or expectation of being invited to take part in that journey. Leonard owes me nothing. That said, I don't want to wake up one morning and read the inevitable headline on the NY Times website without some form of preparation. As followers (a better description, in my mind, than fans), is there some way to communally get ready for what is to come?

I don't see in that interview (or maybe I don't want to see it) a specific illness mentioned. He is 82 and that is obviously quite an age.
Top

My wife just turned 82 and, like LC, has back issues (which she is dealing with). I know she would not be enthralled to read online discussions about her conditions and ultimate demise, and (if he reads these pages), LC might not as well.

I know such speculations come with the territory for celebrities, and I realize LC has, through his writing and otherwise, made his life an open book, but I would like to think LC's fans are, as he said in Las Vegas, "of a higher order."

We all wish Leonard the best of health, may he be with us for many more years, and I wish the "Bench Project" in Greece would go forward.
Top

https://twitter.com/sylviesimmons/statu ... 6628503553
'Being ‘normal’ is not necessarily a virtue; it rather denotes a lack of courage!'

'Loving you is the most exquisite form of self destruction'...
Top 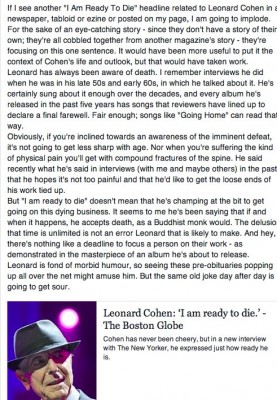 I read the New Yorker article last night and am saddened greatly. I know he is in pain. I pray for his health, both physically and spiritually. I was touched by Dylan's high appraisal of aspects of Mr. Cohen's work that I am too obtuse to notice, such as the beauty of the melodies and counterpoint. My focus is on lyrics, but now I think I can appreciate the music more; I enjoyed it before but did not notice the things that Dylan articulated so well. I hope one day that our Leonard Cohen will be awarded the Nobel Prize for literature, as Dylan just did. May he live to see it!
Hal E. Lujah
Top

He wants to live to 102.
Obviously finding a way of coping with the current challenges of his version of 82!

Leonard Cohen Corrects Himself: 'I Intend to Stick Around Until 120'

He is being wry
That is the age that Moses died according to Jewish tradition.
Top
Post Reply
42 posts