Hi,
MOJO magazine's next issue (February 2011) features Neil Young on the cover, but perhaps we -Cohenites- would still like to buy a copy... 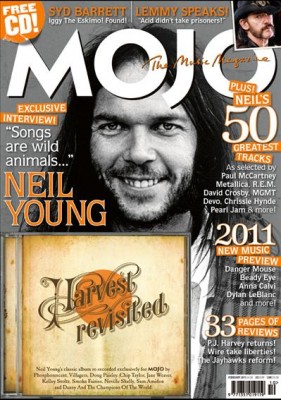 In this issue:
AND FINALLY…how do you survive five decades of rock’n’roll excess? One of the stars of this month’s issue has the answer.

Thanks for the heads up Maarten!

I'll be checking the stores for it!!

This is the current issue of Mojo as I got it today or rather a friend got it on a trip to Dublin for me as it isn't available in my town! I'm told there will be an write up about Leonard and the upcoming album in the next issue which is the March edition and will be available in Feb. Have flicked through but didn't see that reference yet but when I get a chance to read fully I'll scan and upload it here.
2009 Dublin 2010 Lissadell Katowice LV x2 2012 Ghent x2 Dublin x4 Montreal x2 Toronto x2 2013 New York x2 Brussels Dublin x2

Gwen,
Thanks for the update! A little blue bird told me about a future article in MOJO magazine, but I guess I jumped the gun...
So: March issue it is!

Maarten wrote:Gwen,
Thanks for the update! A little blue bird told me about a future article in MOJO magazine, but I guess I jumped the gun...
So: March issue it is!

Little Birds are great. It was a Little Bird who alerted me to this issue for a Bob Geldof interview and the next for the write up on Leonard!
2009 Dublin 2010 Lissadell Katowice LV x2 2012 Ghent x2 Dublin x4 Montreal x2 Toronto x2 2013 New York x2 Brussels Dublin x2

The February Mojo has been out since early January in the U.K., so the March issue will be available in early February! Although I usually find cover CDs to be a complete waste of time, the "Harvest Revisted" CD is actually pretty good, even though I'd never heard of most of the artists featured on it. There are none of the usual grating voices and hideously inappropriate variations of songs that usually come with these things. In fact the whole thing hangs together extremely well. Included are Chip Taylor's version of "Words" and The Smoke Fairies' "Alabama". Although I've been buying Mojo intermittently since Issue 1, I finally took out a six-month subscription in September. The free 5 CD Elektra Records box-set offer was just too good to miss (though I had to wait a full two months to receive it)!

i hope i can find this issue somewhere, as i see that one of the bands on the neil young album is Phosphorescent, whom i've first heard about somewhere on this forum, and got to like even more, since i found the "willie nelson" album.

I shall look in Brussels for it whilst I'm visiting.

Thanks for this. Bought it yesterday and listened to the CD this morning.

Mojo's pretty good, but don't you think Uncut is generally better? For those who are looking for new music to listen to, get the Feb '11 Uncut. Its CD has 15 new tracks from a range of artists. Included are new tracks from the forthcoming albums from Iron and Wine and The Low Anthem, two of my favourite artists (in the studio and live). Both are on tour over the coming weeks/months. Highly, highly recommended.

Also, there's an interesting Bob cover on the Uncut CD, which is quite fun.
Top

Shouldn't this topic be in other music? Quite what relevance Bob Geldof has to the music of Leonard Cohen is lost on me. Masterful commentator of the inner landscape - media executive!
Top

MOJO MARCH 2011 issue has Nirvana on cover and a full - page review of LC's final concert in Las Vegas - written by Sylvie Simmons: 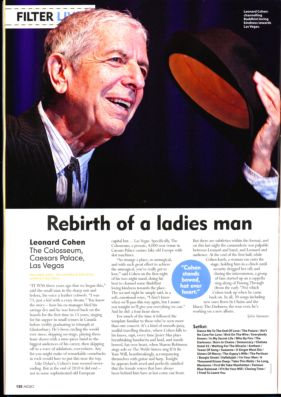 Citizen_Kane - Leonard may be the anti-Leonard Cohen in that he passionately rushes his music out ("Living With War") while Leonard presents his work in a much more considered manner.

commonweal - I think that Mojo and Uncut used to be genuine rivals, but a while back Uncut seemed to spread itself too thin - either by covering many artists or too many genres. That said, I regret missing the piece on Terry Reid, last month.