Leonard Cohen's concert at the Allen Theatre in Cleveland's Playhouse Square was one of the best I've seen. Not only was Cohen in full, expressive voice, his selection of material was exceptional, his band extraordinary. The sound, too, was crystalline, underlining Cohen's poetic authority.
In what was apparently his first Cleveland show since early 1975 (anybody with information on that performance, reportedly at the long-defunct Smiling Dog Saloon, please get in touch), Cohen sang for nearly three hours in a concert with a 20-minute intermission. He was courtly and funny and self-deprecating, spanning lover, supplicant and oracle in tunes such as "Suzanne," "The Gypsy Wife," the charming "Take This Waltz" and "I'm Your Man."
Sharon Robinson, Cohen's chief collaborator, shone on "Boogie Street" as Cohen shadowed her near drummer Rafael Bernardo Gayol, though it could have gone on longer; and the Webb sisters, Charley and Hattie, were incandescent on "If It Be Your Will," one of three encores. The sound was remarkable, the lighting subtle. All attention was on Cohen's lyrics and his surprisingly strong, deep baritone.
At 75, Cohen has hit the zone, presenting an unparalleled repertoire in a show of remarkable and creamy depth. Born wise, he seems ageless. A courtly, mystical presence, he distills the oracular into grace and singular civility.
Top

Ahh, I remember the Smiling Dog Saloon. Cleveland being the town we were raised in, we were constantly back and forth to visit family, but I'm embarassed to say, was not aware of LC then. There come those regrets again. Hope someone responds here to your request. Would love to hear their input on that performance.

I enjoyed reading your review. Thank you for posting it. Welcome to the forum!!!!! Hope to hear more from you.

Leonard Cohen at the Smiling Dog Saloon, Cleveland 1975(?) it was winter heavy snow and as the night wore on no Leonard. Until he showed up about 9 or so. There were supposed to be two shows but it was snowing hard and there was only about 30(?) people there. After the first song we all started clapping and he said: don't clap anymore, come all of you and move down front here and just say if you like it. Something close to that. He played one long performance. Had his Buddhist spiritual adviser on stage too. Two beautiful backup singers in matching brown pantsuits with little gold maple leafs on their lapels. What a night!
Top

Welcome to the forum!

OMG - only about 30 people in the audience

I went to Jarkko's 'Leonard Cohen files' and I see NO reference to a Cleveland show. I'm not saying it didn't happen, but, Jarkko, how could this not be in the definitive list of concerts in the 'files' if it did happen?

Tomp, you were privy to an exceptionally special show (I hope you are sure of your year-will wait for Jarkko's verification). Gosh, how I envy you!!!!!

Perhaps a bit late to the party here, but looking through my paper cuttings looking for clippings from the 1972 tour, I came upon this review. I had to look it up, but Feb 2 1975 was a Sunday which confirms that the clipping was for the 1975 show at the Smiling Dog Saloon. 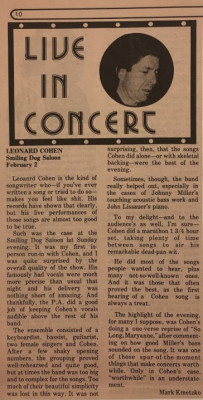