Thank you for the DVD info Marg! I will be looking forward to purchasing one when they are released, even though I was able to see the movie finally! Dave and I saw it on Sunday at a little theater in Portland, OR called 'Living Room Theaters'. It is a small venue that shows about 7 movies in different rooms having a mix of easy chairs, theater seats and tables with chairs where they serve food and drinks. The room where Marianne and Leonard was playing was about 2/3 full for the 2 pm showing.

Did we like it? Very much! After reading the reviews, which were only about 80% positive, we didn't have the highest expectations but were pleasantly surprised. For us it was extra special because we had just been to Hydra for the first time this year, and of course that is where the movie is set for the most part. I knew the story line already from everything I have read about Leonard in the past couple years, but I did learn some things I wasn't aware of about Marianne. As for some of the reviews saying the focus was more on Leonard and accusing the movie of treating Marianne as a secondary character in spite of her having top billing, I would have to disagree. For one thing, she was his MUSE, there to inspire him not overshadow him. Like others have said, I doubt if she disdained the roll. Beyond that though, I felt that the movie was very much about her. It gave her opinions and feelings and impressions the lion's share of attention, and I was not left with the impression of a weak woman. Of course it focused on Leonard also, because, well face it, without him in her life, Marianne's story would not have been made into a movie, as there is no muse without an artist. Like others, I enjoyed the time spent with Layton's candid partner Aviva. Incidentally, I saw on Google that she took Layton's last name, but Wikipedia says they were never married(?). Also, once again in this movie (as always it seems), there was not much said about Adam and Lorca's mother Suzanne, although Aviva calls her ruthless and Marianne mentions an encounter with her. Yes her story is mentioned elsewhere but never really focused on much, and I find it strange that she is often treated as inconsequential. It makes me wonder if there is some kind of gag order regarding her, but maybe she just isn't of interest, and there isn't a conspiracy after all. Besides, this movie wasn't supposed to be about her!

The bottom line is that we found Marianne and Leonard to be an interesting and romantic movie. (Be careful with the ending, it had me in tears, and even Dave was getting choked up). We give it 2 thumbs up, and we are looking forward to seeing it again when the DVD comes out!

I've read all the reviews here, except the ones where a link needs to be clicked on first. I'll return to read those. Ironic that the woman writer/reviewer who complains about the film not focusing on Marianne enough and muses as much as 'abused beings' goes into great detail about other artists and their muses, and hardly focuses on Leonard and Marianne.

I hope to be able to see this film and have my own views of it.
"Be yourself. Everyone else is already taken."
~ Oscar Wilde
Top

I just returned from seeing the film. I enjoyed it very much, though as others have mentioned, there wasn't any new content. I particularly enjoyed the remarks made by Ron Cornelius as I've never seen an interview with him.

What Cohen fan wouldn't love all the old film and interviews! I was particularly touched by the shots of Marianne in the audience at the Oslo concert (post 2012-as Mitch Watkins was guitarist) and also the scenes from her death bed.

One irritating thing was that the audio and video was about 1 second out of sync. So it made the interviews distracting to watch. I'm not sure if this was the theater's fault or a fault in the mix.

I was surprised to see that Tony Palmer was the Executive Producer and that DA Pennebaker was involved.

Like John Etherington said, I loved seeing Jim Devlin and Albert Noonan in the credits.
"Say a prayer for the cowboy..."
Top

Has this not been given cinema release outside US and UK? I've tried to follow its progress on Box Office Mojo but information there is sketchy and out of date.

I caught it in London and was enthralled but I suspect it was largely due to my commitment to Lenny's music. The problem with this as a love story is that it really only happened for a short time within their lives and, in the public eye, it is not a relationship between equals. Leonard was one of the all-time greats and Marianne was his occasional music in the early part of his music career. There was undoubtedly a lasting bond of friendship and their final messages are touching but this bond was never remotely strong enough to make them want to be together again in life. Which means the film is padded with Lenny's career and Broomfield's intrusions.

Obviously I'm a sucker for all things Lenny but I don't think this film does what it says on the tin.
Top

I searched for general cinema release in Australia, and got a hit for November 2019.
No more info than that at this stage.

The Melbourne International Film Festival has tickets available but selling fast for 06, 09 and 10 Aug 2019
http://miff.com.au/program/film/mariann ... ds-of-love
Maybe Andrew, Murray, Tracey and Jenny might be able to get there too

This is what my search revealed:
https://www.eventcinemas.com.au/Movie/J ... cinemas=22

Looks like November 10th at my local cinema complex.
I have added it to my watch list (actually it's the only item on my watch list).

Ah Alan, in the link above even though it says August, I was thinking in my head September when I saw this “selling fast” wording! 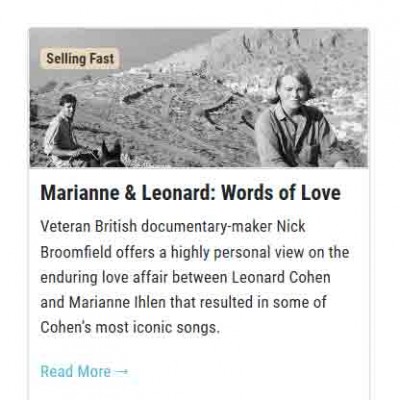 Maybe the crew in Melbourne have already seen it

Bev, in response to your musing re whether any of us Melbournians had seen this film, I did indeed see it at the Melbourne International Film Festival, but wasn't sure about posting my thoughts here for one of the reasons I outline below.

I really enjoyed it, it spoke to me personally in an emotional way I fully expected it to, and I do truly believe it was moving from various standpoints.

There were a few things I discovered that I wasn't aware of before, so that was good too. It was also spiced with some lighthearted moments and quotes, which I was mostly familiar with. In particular, the interview segments with Ron Cornelius and Aviva were both funny and informative.

However, I have the "cognitive dissonance" facilitating habit (

) of checking reviews after the fact and, in this case, I dug deep enough to come across some quite negative reviews that disheartened me somewhat.

Some aspects of them have already been discussed in this thread. Anyway, I have been able to analyse these critiques, discuss them with a few peers as well as my 36 year old son (who all saw the film) and have now worked through my feelings reasonably well.

My advice to anyone here is to go along and see it and make up your own mind, in fact embrace it, open your heart to it... and don't be put off by critiques from non-fans who may have certain doctrinaire axes to grind, perhaps avoiding all media reviews until you've seen it.

Hi Andrew, good to catch up with you

….and I've just realised that you posted in July you were going to see this

Thanks for your thoughts on the movie. Yes, there has been an assortment of responses to it and yesterday I was provided with an audio download link of an interview with Sylvie Simmons about this film. I haven't listened to it yet but the comments should be quite interesting and probably the most informed you could get!

Vinny talks to Leonard Cohen’s biographer Sylvie Simmons about “Leonard and Marianne” Nick Broomfield’s documentary film about their relationship and the time spent on the island of Hydra in Greece in the 1960’s that was to be so formative in Cohen’s career. Starts With “Closing Time”.

btw - That section with Ron Cornelius I'm guessing could to be taken from LC Under Review as mentioned here -
https://www.leonardcohenforum.com/viewt ... ew#p370504
The link to LC Under Review is there also and Ron speaks at 42.44mins in it.
It doesn't have to be perfect, it just has to B4real ~ me
Attitude is a self-fulfilling prophecy ~ me ...... The magic of art is the truth of its lies ~ me ...... Only left-handers are in their right mind!
Top

I just listened to that Sylvie Simmons interview. Whilst she was disappointed in the film, what she says I think is very fair and balanced; it contextualizes the relationship itself and how it is judged from her knowledge of them both and the era they lived in.

In my comments in the earlier post, I forgot to say, in terms of production values, I also thought the film chopped and changed a bit, perhaps needing a bit more coherence.

What a shame this film got such a limited release in Ireland - only those living in Dublin had a realistic chance of seeing it. Glad I have ordered dvd, look forward to that, but would have liked to see it on the big screen. Count yourselves lucky those who did!
Ring the bells that still can ring...
Top

For those who didn't manage to catch this documentary film during its cinema release, it is scheduled to be broadcast on BBC Two in the UK at 9:00pm on Saturday, 28th September 2019:

That’s good news, will certainly record it and almost certain see more then once. Having said that it does surprise me a bit that this film will be broadcasted before the DVD release. I ordered a copy and it was due for release sometime in October
Lille 2010, Dublin 2012, Mannheim 2013, Rotterdam 2013, Montréal 2017
Happiness is just the side effect of a meaningful life.
Top

Thanks for this news, Born With The Gift...

Have made a note of the time and date

Will still look forward to having dvd.
Ring the bells that still can ring...
Top
Post Reply
75 posts