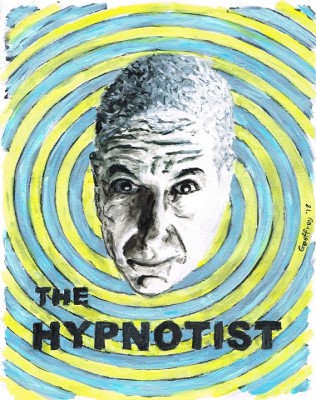 I’ve seen many different men in my 4 and 30 years, but this one you doodle is by far the ugliest. Did you draw him in a hurry?
Top

some time ago i drew a hand, and have several times refused to sell it to visitors. you described it in one word: grotesque. the day i make pretty pictures to hang over someone's sofa is the day i pack it in. why don't you show us what YOU can do with a sketch pad, you little piece of grit in everyone's wellington!
Top

You remind me of a chef I never met,at a 7 star French restaurant I never visited. He served up a poor meal. There was even a little piece of grit in his Boeuf Wellington.

When I complained, he threw several saucepans and a hissy fit. Twirling his moustache in an anti-clockwise direction, he moaned "why don't YOU come in the kitchen and cook". From that moment I realised the important truth that no-one's work may be criticised unless you personally can do better Thus I refuse to describe your response as petulant and over-sensitive. I just won't do that. Instead I read your response as logical and reasonable.

This actually reminds me of the time, I think it was half past 4, or maybe 1675, that Geoffrey Wren built a simple basic cathedral and his brother Christopher said he was puzzled by the lifts and escalators which you included centuries before their invention. Your bro' commented , adopting the Anglo/Norwegian High Church 2 pun approach, "Geoffers, your design is a bit nave and you should altar it".

Then you, Sir Geoffers, shot back "show us what YOU can do, Chris bitch".

And that is the story why we Londoners have to suffer the grotesque presence of St Paul's Cathedral in the middle of our otherwise beautiful City. It's all your fault. Why don't you apologise? I think you should.
Top
Post Reply
4 posts • Page 1 of 1