For the ones, who always wanted to try Zen but also for the ones who can’t imagine themselves cross-legged on a cushion is there a great possibility to give it a try in Amsterdam.

One has to start somewhere. Zen Centrum Amsterdam, part of the International Kanzeon Sangha, provides a fitting environment. The beautiful zendo is situated in an old building at the canal in the centre of Amsterdam. The introduction in Zen will be given by Meindert van den Heuvel, Mu Sho Sensei. From my own experience I can declare that his kindness and patience are measureless, even with the most retarded Zen-students.

This famous opening line of Shunryu Suzuki’s classic “Zen Mind, Beginner’s Mind” can help them who are hesitating:

Come, friends, come with your heart open, come without expectations. All what we have to do is to sit still for a while. 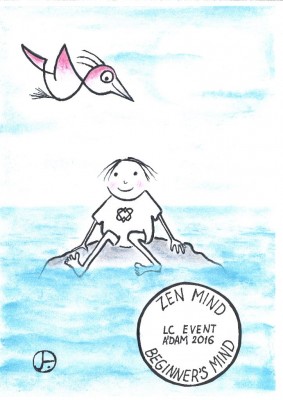 The text above is the closing part of the article I've written about the Zen Experience in Amsterdam; the entire text will be published in the Event Brochure.

Note 1: Don't worry about "sitting cross-legged on a cushion". It's the most impressive posture but it's not necessary; there are more possibilities, quite comfortable - even the chair is permitted in this zendo.

Note 2: As the zendo capacity is about 40 people, we'll make a list of participants in the near future; you can now start thinking about it.

Note 3: If you have any questions about the Zen Experience, don't hesitate and PM me.

The results of our survey until now is that we have already so many participants who like to go to the Zen experience, that our 40 available places are fully booked already.

From now-on, people who indicate in the survey, that they like to go to the Zen experience are placed on the Zen stand-by list.

We are investigating if a possible second Zen-experience is possible, but at the moment we are not sure of this.

Well done, surrender! Such a great offering... so unusual and lovely for our Events and gatherings

Wish I could be there for it.


~ Lizzie
"Be yourself. Everyone else is already taken."
~ Oscar Wilde
Top

We have 67 participants who will like to join the Zen Experience.

You are listed in one of the groups. The only way to change your group is by asking one of the people in the other group to change places. If you do so, send us a mail please !

It looks from the list as if there are some free places for the 1:00 pm Zen Experience. How long does the session last? Is it possible to add a name to the list at this stage?

Yes, it is still possible there a a few places left. I you send me a mail I add you to the list.
First-come, first-served
One session is about 2 hours.

I noticed I am on the list twice - both sessions - so there is a place there for Wendy.
Top

I noticed I am on the list twice - both sessions - so there is a place there for Wendy.

Janet, I see its caused by you did 2 times the survey

but its OK now.
Wendy is on your place in the second session now.

Jarmila as our Zen Experience organizer is on both lists.
Here is the new list:

Thank you, Wybe, and sorry for doing the survey twice, I am not sure what happened there

No problem at all, see you soon, Wybe
Top

The idea of the Zen session has emerged quite a long time ago, it was hard to estimate how inviting it would be.
We are very pleased with the overwhelming response and very happy that we can offer it to everybody, who has signed for it. It is mostly due to the kindness of Meindert, Mu-Sho Sensei, who has agreed to give us his time on Sunday morning and then when we’ve asked for more – also Sunday afternoon.
We have made an arrangement about the rent of the Zen Centrum Amsterdam but not really about Meindert’s reward - but now as he is going to spend with us the whole Sunday we would like to make a suggestion for a little donation; entirely in the line with the Buddhist tradition of Dana (generosity) practice.

In the Buddhist tradition, the teachings are given freely because they are considered priceless; in the Buddhist tradition we also practice dana, or generosity, by making monetary offerings for the teachings. Dana is not payment for goods or services rendered; it is given from the heart.
From: http://dharmawisdom.org/teachings/artic ... -word-dana

Friends, we are proud to announce that all places for the Zen Experience are taken by now.
We are looking forward to see you all in the zendo of the Zen Centrum Amsterdam.

If you are on the list and not coming - please let us know.

Friends, last instructions to let everything go smoothly on Sunday:

After silence, that which comes nearest to expressing the inexpressible is music...
(Aldous L. Huxley)
Top
Post Reply
13 posts • Page 1 of 1