Kicking off the thread for the final concert of the European leg 2013. @ElaineB74 - Tonight it's the last show of this leg of the Leonard Cohen Old Ideas Tour which means @LeifB73 gets home tomorrow !! 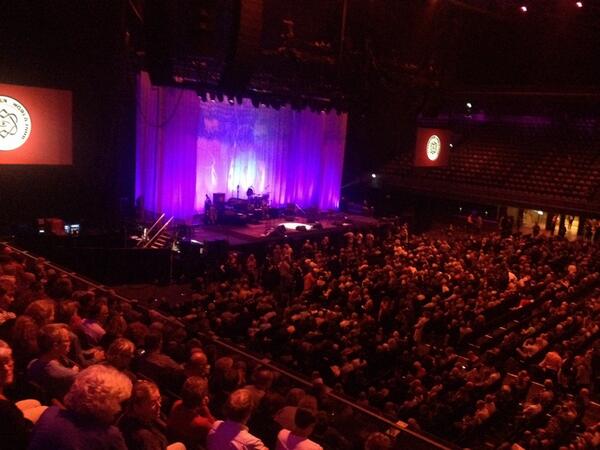 @maartenhajer - LeonardCohen (79 tomorrow) 'I am not quite ready to hang my gloves but I know where the hook is' #Ziggodome pic.twitter.com/rXQojBNl95 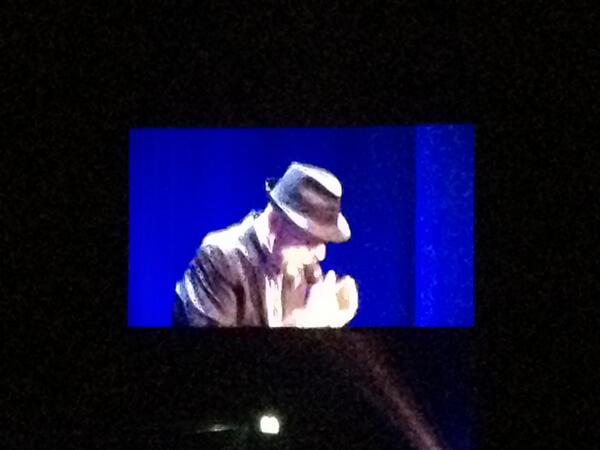 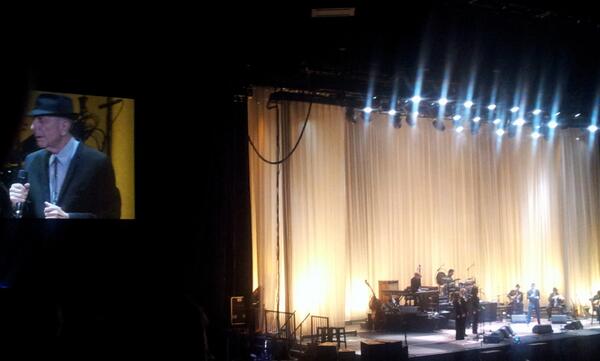 Sharon Erde - The Darkness got him smile

http://www.youtube.com/watch?v=Di-3mxWp-D0
I've Got A Little Secret (sort of little party on stage -

Thank you for starting this thread Marie! Really excited to read and hear everything about this concert, well actually all concerts but this one in particular.
Leslie

Wow, this person really outdid themselves with the recording. Thanks for posting the links, Linda.
Marie
Speaking Cohen
Top

I think there is going to be a lot of video from this show!

I've Got A Little Secret (crew comes onstage) / Save The Last Dance For Me
http://www.youtube.com/watch?v=-BgM-rKZYCg

I wake up this morning and think: did this really happen? The greatest concert ever last night? And I was there? First row? Unbelievable. Everything, the band, Leonard, the audience, more than great,unique, my daughter in law said: heavenly atmosphere and I agree. It was pure magic.
And a great setlist, with extras at the end: both 'I tried to leave you' and 'Save the last dance' and: 'I got a little secret'. That was a pure party on the stage and in the audience, look at the video.
Thanks for the great video's, I will cherish them.
And Inge, so nice to meet you!
here is your love for all this
2008 amsterdam/rotterdam, 2009 antwerpen, 2010 gent/dortmund, 2012 gent/amsterdam, 2013 antwerpen/oberhausen/rotterdam/amsterdam
Top

The end of a wonderful tour in a wonderful city. Many many thanks to Jarkko and his friends on this forum for organizing the presales and keeping us in the loop on all the news. Happy birthday Leonard. Do come again. Or hopefully, do play there where you are from one day.
Top

Leonard started off by saying '...friends this is the last concert in europe,I don't think we'll be back' ....adding after a pause 'for a while'. He also repeated the line about knowing where the hook for his 'boxing gloves' is. A new line for me was ,after the familiar lines about 'high and low places '.......infact its such a hassel to leave your house what with parking and walking and the general hassels and abrasive qualities of human life that I deeply thank you for just getting here at all'! Perhaps this sounds like a man who is looking forward to spending some time at home

Anyway we all knew the possibility that this might be the last ever European concert and this added a little intensity and poignancy to the experience.
A Great show followed and I particularly loved hey there no way to say goodbye in the first half with 2 very beautiful violin breaks. Javier's intro to who by fire seemed,incredibly,greater than ever
It was of course great too that the first half ended with anthem.

The forum had secret plans for this show involving interval singing of 'the guests'. A lack of confidence in the rendition led to a spontaneous change to 'passing through',but alas security made us stop before Leonard came back on stage . Still the second half began with an appreciated rendition of happy birthday , and at times in the second half red roses were thrown on stage and also a toy monkey just at the right time in first we take Manhattan.The 'happy birthday' version of Tower of song deserves to become a 'classic'.

The final European songs were .........I tried to leave you , then i've got a little secret ,finally save the last dance.The entire crew joined Leonard and the band on stage at this point .
A great European swan song, though personally I feel sure it is Leonard's destiny to perform on stage well into his 80s,perhaps staying away from the huge arenas and returning to large ,and some smaller , concert halls.

It looks like this will be a well documented show judging by the good video already uploaded -i will add to that in a superfluous way in time.
I have a very good quality audio of the whole show which i will put on drop box in a few days . The audio is straightforwardly good until halfway through take this waltz at which point,for reasons forum concert goers will appreciate, it becomes more 'atmospheric'...but it was the atmosphere at this show that made it perhaps just that bit more special.I listened to it all again this morning while walking through the very busy city of Amsterdam,and it certainly helped me cope with any 'abrasiveness' to be experienced in a crowded city.
Thanks too for the pre and post show meet ups, and the splendid t shirts saying 'Closing Time...NoNon'.The obvious message was reinforced during the song as every time Leonard sang 'closing time' we sang 'no no no'.This was noticed by those on stage.

PM me in a few days
if you want the audio download link. More than happy to supply it,and downloading the whole show is easy .

Congratulations...concert reports, at last! Did anyone see Eric Andersen in Amsterdam on Wednesday? If so, please put a report, plus set-list if possible, in "Other Music".
Top

Set 1
Dance Me to the End of Love
The Future
Bird on a Wire
Everybody Knows
Who By Fire
Hey, That's No Way To Say Goodbye
The Darkness
Amen
Come Healing
Lover Lover Lover
Anthem

Thank You Leonard, the wonderful band, especially Javier, and the whole team for the splendid concert!

We hope You have many, many "Secrets" to sing for as in live concerts and also in DVD:s!

Keep healthy, don't catch a gold and come back after You have made Your new album!


We'll miss You all so much!

John Etherington wrote:Congratulations...concert reports, at last! Did anyone see Eric Andersen in Amsterdam on Wednesday? If so, please put a report, plus set-list if possible, in "Other Music".

My wife and I are back home from what could possibly be the last Leonard Cohen concert ever in Europe. We are still bedazzled by the experience and have absolutely no interest in going back to the hassle and bustle of our daily lives. It all seems so trivial. A job….who cares, I just want to hang on to the moment.

We had great seats (2nd row center stage) thanks to the presale. Once again thanks to Jarkko and others who made this possible. It really does make a difference to the whole concert experience.
The sound is probably not as good as if you were sitting further back. You get more of the stage sound but that does not spoil the fun.
The music , Leonard, the band, the audience, all perfect and a great experience to be part of. Being the last concert of the European tour did add a little extra emotion and perhaps that is the reason why this concert was for me the best one so far.
During “Closing Time” an increasing number of people in the front rows (inspired by some forum members) started singing “no no no” after every “it is closing time”. It was funny to see the reaction of Leonard and the band because it looked they were wondering what was going on.
Getting the crew on stage during “I´ve Got A Little Secret” was also a nice extra. It created a real party atmosphere. I think it is great Leonard got them on stage as these people work hard and rarely get this kind of recognition. 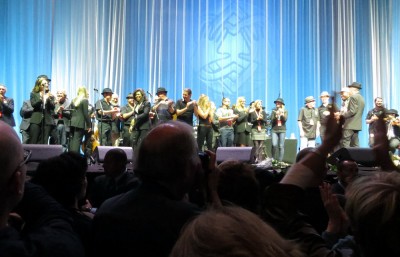 There was very little room between the first row and the stage. People started cramming into this very small area when Leonard wasn´t even half way thru Take This Waltz. I noticed a few people in the front row were not real happy with this as they now had no view anymore and very little room to stand up. We were only at 2/3 of the concert and so everybody in the first rows had to stand up to see the remaining 1/3 of the show. I agree the sing-alongs add to the whole atmosphere of the concert and Leonard and the band seem to enjoy it but I also feel it wouldn´t hurt if people were a bit more considerate towards their fellow concert-goers.

I really hope we are going to see more of Leonard and this great band. Perhaps after he finishes a new album in 2014. If not, I will be sad but I will cherish the memories and be grateful for the experience.

Thanks to those who uploaded the videos. 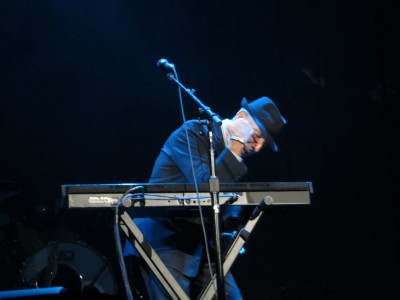 Going crazy on the old keyboard