Well i am waiting to find out how the concert went last night.


Leonard Cohen returned to Dublin for his fifth Irish visit in six years, and if his Irish fans were suffering from Lenny fatigue, they didn’t show it at the O2 last night.

“Thank you for putting your household budget in jeopardy,” he told the audience after performing his first song of the night, Dance Me to the End of Love.

This was the first of two nights at Dublin’s O2 – he performs again tonight – and though the docklands venue couldn’t hope to equal the atmosphere of his legendary concerts at the Royal Hospital in Kilmainham, Cohen did manage to turn the vast venue into a small, smoky jazz club for a couple of hours.

So, what brings the crowds out year after year to see him? It’s the sheer quality, which hasn’t diminished with age. His voice is pure liquid gold – with a dash of bourbon and just a dollop of guilt and self-loathing.

And his knees haven’t gone, either; many’s the time he gets down to beg forgiveness from someone he has wronged, or simply to genuflect at the wonder of it all.

“I’m not quite ready to hang up my boxing gloves just yet,” he tells the crowd. “I don’t know when we’ll meet again, but tonight we’ll give you everything we’ve got.” And he does, delivering a lengthy set of classic songs.

His trusty band were with him all the way, delivering virtuoso performances that did justice to Cohen’s magnificent back catalogue. Solos from violinist Alexandru Bublitchi, guitarist Mitch Watkins and laud player Javier Mas juxtaposed nicely with the gently undulating voices of Sharon Robinson and sisters Charley and Hattie Webb.

At the centre of it all, though, was Cohen’s seasoned voice, delving effortlessly into seldom-reached depths of the soul. And he sounds like he still means it – Bird On A Wire was sung with fresh passion and penance, while Come Healing proved that there’s redemption in this old sinner’s soul.

As long as Leonard Cohen keeps serving up his smooth nectar of timeless songwriting and skilled delivery, there’ll always be a welcome for him here.
Top

John Meagher, an Irish Independent music journalist, was on the radio this morning gushing with praise. He admitted worrying in advance there might be Len fatigue but ended up loving it. Hardly any filler, perfect sound and easily as good as his famed Kilmainham 08 appearances was the verdict- high praise indeed! I was in tweet contact with him after and he did say Lissadell were the only irish dates he has missed so wasn't in a position to compare those majestic shows to last night. Oh- he also observed there were banks of seats empty in the O2 last night apparently. Far from a sell out it seems unfortunately.
Top

@neeerv - Casually tweeting in the presence of Leonard Cohen.

@FrankSunTimes - Leonard Cohen clocks up 3 and a half hours at O2 in Dublin. Take that Bruce

@SeanKennyTD - Enjoyed Leonard Cohen concert at O2 tonight, among his words of wisdom he said “aint gonna hang up my boxing gloves yet” – good line

@johnmeaghermuso - Back from a quite extraordinary Leonard Cohen show. 3.5 hours - very little filler. Easily the match of his Kilmainham gigs from 08

@jimmyobrien Folks if you can get a ticket for leonard cohen in the O2 dublin tonight do so. He just gets better. last night was magical.

@AineMByrne - @LeonardOnTour thank you for four hours of pure ecstasy. One of the best nights of my life. #leonardcohen

There are photos from the show - at the link -

The other video available already is Albert Noonan's great recording of So Long Marianne http://youtu.be/TC5xv3JKy8E

A great evening again, probably going to be my last LC concert (I have said this before!)

Not full but considering the number of visits since 2008, the Irish economy and the cost of seats it was pretty packed.

A very warm reception - not loads of standing ovations I don't think from what I could see, but a huge flow of affection for sure fully manifested in the encores.

A lot of songs I love were not included, no Anthem, no Sisters of Mercy, no Heart with no Companion but of course there were compensations.

I would have some reservations about the style of singing some of the classics, words off the beat is the nearest I can get to expressing it - but that is purely a personal take on it 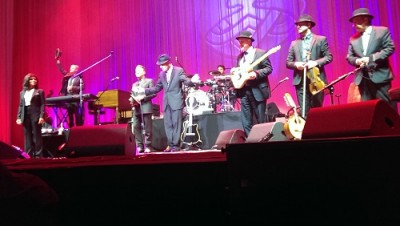 Set list - as posted in Setlists thread by musicmania -

I Tried to Leave You

JudasPriest wrote:Far from a sell out it seems unfortunately.

I am reliably informed by someone who should know these things that the second show is sold out. I guess people prefer to go out later in the week if they have a choice. Not everyone is a repeat offender.

Fergus Finlay really says it all. Amazingly breathtakingly beautiful night.
So many times we think it can't get better, and it does! Better and better!!!!!!
Too emotional to say more, and another night of magic awaits.
Anne
Top

Thank you Albert for bringing those of us who are not there in body but there in spirit a bit closer to hearing Leonard sing. Your videos are outstanding!
Sounds like last night was a great performance and audience.
Leslie

Ticketmaster still have ticket available for this evening!!!
I can't be there unfortunately!!
Dublin 14/15th September 2012
Top

Have to say that last nights show was up there with the 2008 legends.
I for one laughed and cried then cried and laughed again.
Leonard really seemed to be enjoying himself esp tower of song, lots of jokes.

I did sadly get the feeling that he was saying a long good bye this time so hope that is not true !
My favourites bird on a wire , alexandra, 1000 kisses