A pre-concert article at Kentucky.com -

Now 78, poet-songwriter Leonard Cohen is on the most arduous touring schedule of his career.
Robb Cohen/Invision/AP

It seems fitting that one of the most recently quoted songs by pop poet laureate Leonard Cohen should come from his newest album, a record ironically titled Old Ideas.

The song in question is Going Home. It is essentially a summons by God. That is certainly in keeping with a portion of Cohen's often-fantastical life — specifically, a five-year period during the '90s, when he retreated from songwriting and performance and became an ordained Buddhist monk. That doesn't mean Going Home is at all autobiographical. But it certainly explains some of Cohen's source material.

"I love to speak with Leonard," muses the almighty at the onset of Going Home. "He's a sportsman and shepherd. He's a lazy bastard living in a suit. But he does say what I tell him, even though it isn't welcome. He just doesn't have the freedom to refuse."

Such are the trials and expressions of one of the most heralded songwriters of any pop generation, an artist who after a recording career of more than 45 years finally makes his way to Kentucky. Cohen, a 2008 Rock and Roll Hall of Fame inductee, performs Saturday at the Louisville Palace.

But over the past four years, Cohen has reclaimed and, in a way, redefined his own musical identity by hitting the road for several global tours. Three sublime live recordings have been issued from the tour: 2009's Live in London, 2010's Songs From the Road and the limited-edition 2012 EP disc Live in Fredericton.

"It's wonderful to be gathered here on just the other side of intimacy," speaks Cohen with an exact, crisp baritone at the beginning of Live in London. "I know that some of you have undergone financial and geographical inconvenience."

The same could be said of Saturday's performance in Louisville. Ticket prices top out at an unfathomable $252.50 (you might as well call it $300 after TicketMaster service charges). That's not exactly the kind of pocket change a casual fan (or even some devoted ones) might be willing to shell out. Those who do should know that Cohen, who has never been known for his vocal chops, tends to recite the lyrics to his songs more than sing them. But over the course of his performances, that baritone whisper becomes one of the most distinctive elements in songs that lurk within the darker recesses of love, faith, life and loss.

"I've seen the future, brother," Cohen sings during Live in London's whispery soulful version of The Future. "And it is murder."

Of course, the continued irony is that the future that greeted Cohen after Live in London couldn't have been brighter. Last year, for instance, Old Ideas became the first No. 1 album of his career, unseating for a week the then-unstoppable Adele. Now, at age 78, he leads the most rigorous touring schedule of his career, refashioning one of pop music's most storied legacies into three-plus-hour concerts while adding to it with albums like Old Ideas.

"I was having a drink earlier with my old teacher," Cohen said on Live in London during an introduction to Tower of Song. "He was about 97 at the time. I poured him a drink, he clicked my glass and he said, 'Excuse me for not dying.' I kind of feel the same way."

The venue is another one of those wonderful old movie theatres -

One of the greatest of John Eberson’s theatres and considered to be “the finest Theatre in the South” when opened on September 1, 1928, as the Loew’s United Artists Theatre. The original seating capacity was for 3,273. From around 1950, it had been renamed Loew’s Palace Theatre.

Now operating as the Louisville Palace Theatre since 1994. Seating capacity is today 2,800. The Palace Theatre offers a wide variety of contemporary entertainment and Broadway touring productions as well as the local Symphony Orchestra’s Pops series.

This theatre has had four renovations, all prior to 1974: in 1953, a new wide screen was installed; in late-1954, it was bought and renamed United Artists Theatre; in 1963, the balcony was blocked off and a second floor screen was installed and renamed the Penthouse Theatre (since returned to a single auditorium). In 1964, the Wurlitzer organ was renovated. 
Hallelujah, Leonard Cohen will be at The Palace tomorrow night
March 29, 2013 - 9:42am
by David Phillips

There aren't many things in this world that intimidate me. Angry women perhaps, maybe parts of law enforcement, but when I received the generous opportunity to cover Leonard Cohen's show tomorrow night, I had no idea how to do the man justice. What do you say about a legend who ran on the fringe of the Warhol crowd, is a member of The Rock and Roll Hall of Fame (as well as the Canadian Music Hall of Fame among others), was mentioned in a Nirvana song, and who's induction speech was given by Lou Reed (If I have to tell you who Lou Reed is…well I'm at a loss)?! Yes. Those are some of my personal cool reference points, but there are plenty of others.

Lou Reed stated Cohen belongs in the 'highest and most influential echelon of songwriters'. Pretty solid summation of a man who's career has spanned over 50 years, produced 12 studio albums, garnered 6 tribute albums, some documentaries, poetry books and numerous awards that create a list far too extensive to give you. Leonard Cohen does have a bit of a sullen sound, with a deep raspy voice, but creates inspiring songs that are simply beautiful. On his latest album, 'Old Ideas', Cohen stays true to fashion and is blessing us with his first concert in Louisville, ever.

Amazingly you can still get tickets at the link below, they’re not cheap but this is truly a once in a lifetime chance. Come out and have a listen to one of the genuine musical wizards of our lifetime and I hope to see you all there. It may change your life, just saying.

@DeadpanRomantic The crowd at Leonard Cohen is by far the classiest concert-going constituency I have ever encountered. #SportsCoats #RoundGlasses #Slacks

Tweets from the show: 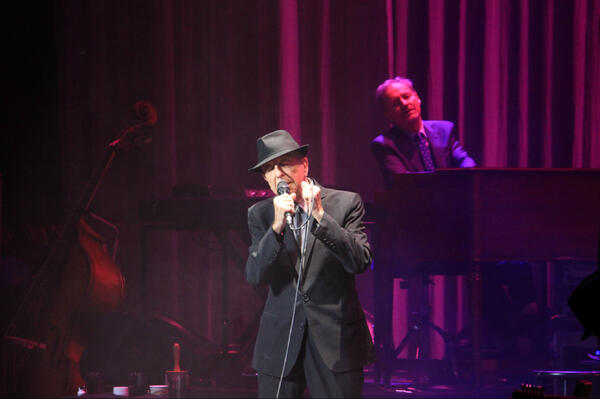 Louisville Palace ‏@LvillePalace 12m
Leonard Cohen takes the stage at the #LouisvillePalace and opens with "Dance Me to the End of Love!" pic.twitter.com/4ld67Pf8up

A bit out of order here - but some good pictures - the theatre is gorgeous ... 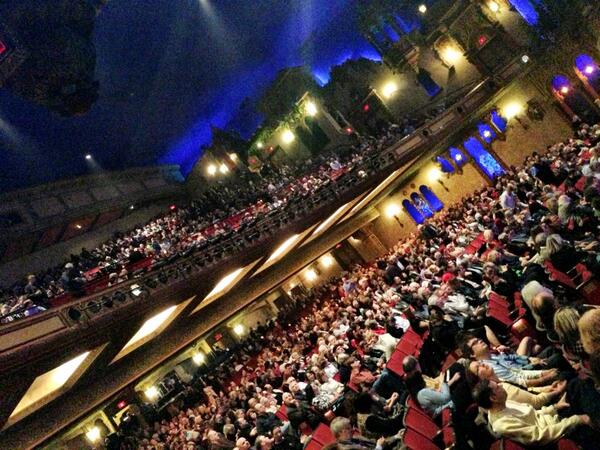 @LvillePalace The crowd is beginning to fill in! Five more minutes until Leonard Cohen takes the stage! #LouisvillePalace https://twitter.com/LvillePalace/status ... 16/photo/1 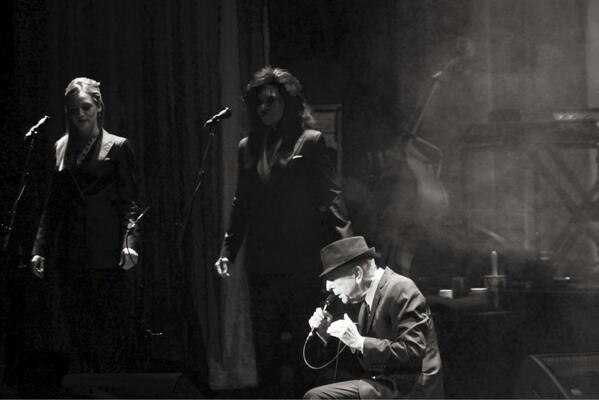 @LvillePalace Leonard Cohen closes out his first of two sets w/ "Anthem!" He'll be back on stage in 20 minutes. #LouisvillePalace https://twitter.com/LvillePalace/status ... 40/photo/1

@philipruskin Leonard Cohen just gets better and better with time. Cats half his age can't play for three hours

@loueyville Leonard Cohen... Still as amazing as he was when I saw him in the 90s in NYC. https://twitter.com/loueyville/status/3 ... 73/photo/1

@LvillePalace "Hallelujah!" Over 300 other artists have covered this classic over the years, but there is only one Leonard Cohen! #LouisvillePalace

@ensable Leonard Cohen -- I feel like I've already been to church, so I'll just sleep in tomorrow morning.

@eekshecried Leonard Cohen was not messing around. Three hour set, up and down on those knees all night.


March 31, 2013
At the beginning of tonight’s (March 30, 2013) concert, Leonard Cohen announced that Music Director and bass player, Roscoe Beck, would not be performing because he became ill shortly before the show and had been taken to the hospital.

While Beck had fallen ill during the March 28, 2013 New Orleans show, he seemed to have done well since then. He was observed joking about the New Orleans incident before soundcheck and appeared in no distress during soundcheck.

The concert setlist was adjusted as a result and Mitch Watkins took over bass responsibilities.

That is not happy news about Roscoe Beck.

I hope he gets all better soon.

Video uploaded by "stilli cling" – Thanks!
It's not up close - and not complete but, it’s …

And here's So Long, Marianne, also from "stilli cling"
Thanks!
http://www.youtube.com/watch?v=ZGFcb6BywkM
Top

Since Roscoe had fallen ill, Mitch stepped in as the bass player in Louisville. And Javier took his turns on the guitar for a couple of songs. 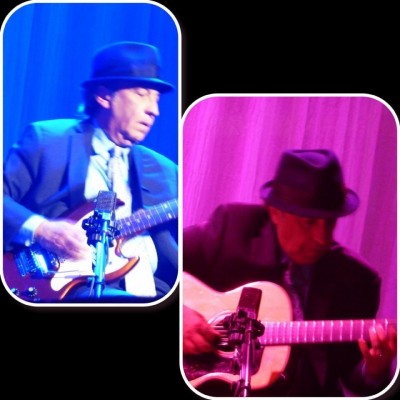 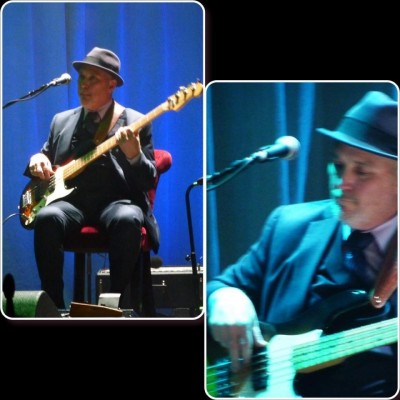 "stilli cling" is incredibly speedy with the videos:
Thanks!

Leonard Cohen wasted no time Saturday night at the Louisville Palace. He jogged on stage, light on his feet in an immaculate suit, and began singing about what is perhaps his work’s dominant theme: the power of love to heal, destroy, sustain and inspire.

“Dance me through the curtains that our kisses have outworn/Raise a tent of shelter now, though every thread is torn/Dance me to the end of love,” he sang, conjuring imagery that pit the ideal of comfort against the realities of uncertainty.

There were moments when Cohen got dark, in that matter of fact way perfected over a lifetime of writing, and moments defined by his dry sense of humor, but all of it was ultimately a kind of celebration. As Cohen has aged — he’s a graceful 78 — the not so simple act of survival, of living to try another day, has become something he champions.

Cohen proved an oddly compelling performer. His famously desiccated voice was in fine form, a deep, knowing rumble, and he moved with a compacted kinetic energy that he occasionally released by sinking to his knees to emphasize a lyric. Ever the charmer, he doffed his hat whenever someone in his extraordinarily tasteful band took a solo.

Cohen has played around with a few different sounds over 45 years of making records, but on this tour he’s sticking to the intimate feel of his latest album, “Old Ideas.” Neil Larsen’s Hammond organ was the anchor, with consistently excellent work from Javier Mas (guitars), Rafael Gayol (drums), Mitch Watkins (bass) and Alexandru Bublitchi (violin).

A key ingredient of Cohen’s music over the last 25 years, however, has been the interplay between his husky, singular croak and the smooth, sweet professionalism of his female back-up singers. On Saturday, longtime collaborator Sharon Robinson teamed with Charley and Hattie Webb to expertly do the job, recalling everyone from The Jordanaires to the Ray Charles Singers.

The biggest crowd-pleasing moments were to be expected; the one-two punch of “I’m Your Man” and “Hallelujah” that came just before the encore included Cohen’s most universally recognized songs. But the most powerful moment of the night came at the end of the first set.

To minimal accompaniment, Cohen recited the lyrics of “A Thousand Kisses Deep” before easing into “Anthem.” The central idea of the first song, that we are unable to not seek love despite setbacks and decreasing odds, has a bleak edge. Cohen didn’t shy away from that bleakness in his reading, but by juxtaposing the performance with “Anthem” he revealed the beauty that can be found in the darkness:

“Ring the bells that still can ring/Forget your perfect offering/There is a crack in everything/That’s how the light gets in.”


Most important: Roscoe, very sorry you are ill. Take care and get well soon.

This is accompanied by some nice photos taken by Amber Sigman. Worth checking out.
Last edited by JacquelineR on Sun Mar 31, 2013 2:26 pm, edited 1 time in total.
Top
Post Reply
77 posts