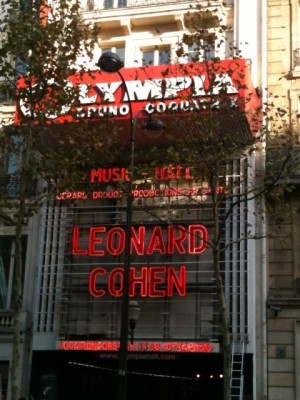 An interesting venue -indoor - the oldest music hall in Paris - The Olympian -
Capacity - varying information - but from past recent shows - I think it is 2,700
[Editing: Capacity 1,952 according to Leif Bodnarchuck Tour Diary http://bit.ly/UzxiQR ] Founded in 1888, by Joseph Oller, the creator of the Moulin Rouge, today easily recognizable by its giant red glowing letters announcing its name. It opened in 1889 as the "Montagnes Russes" but was renamed the Olympia in 1893.

And more from Camp Cohen - the inside - Great show at Olympia tonight. Good atmosphere and really intimate after the massive outdoor venues. I can't tell you how good it felt to be back inside for a show with no worries about the cold, the wind and the rain!

The (soft) 11.30 pm curfew meant that there was no Closing Time though If It Be Your Will (Webb Sisters) was included. There were no "acrobatics" today.

One thing I didn't like about Olympia were the arrangements for finding your seat. There are no seat numbers so the ushers (placeurs) insist on showing you to your seat. Although the ushers wear an Olympia uniform, they are apparently only remunerated to the extent that they receive tips and the girl who showed me to my seat demanded a tip for pointing out which seat in the row I was already standing in was actually mine. I paid 199 Euro for my ticket; I really don't expect to have to pay extra to take my seat.

What a magical night Paris yesterday!!!!

Here's a clip of The Partisan!
Top

I am just about to set off for Paris for tonight's concert, Olympia is one of my favourite venues, fabulous décor and atmosphere.

However I will not be intimidated into tipping, so the ushers will be disappointed with me if this is what they have started doing, never had the problem before here, we will see.

That notwithstanding, I can't wait to get there Paris • Night One
Another curtain call

In black suits and Borsalino, Leonard Cohen is elegance personified,
who takes care to highlight its employees and listens respectfully their solos.

Leonard Cohen was greeted by the audience with a quasi-religious fervor on Friday for the first of three concerts that the Canadian crooner gives the Olympia until Sunday.

At just 78 years, the poet gave a concert for more than three hours, interrupted by an intermission, before an audience of faithful who had paid between 100 and 167 euros to listen.

"Thanks for this home so warm and generous. We are happy to play in the legendary room. I do not know if we'll see, but I promise you that tonight we will give everything we have," did he promised early evening in perfect French.

Surrounded by five musicians and singers to faithful (Sharon Robinson and the Webb Sisters), the Canadian scene transforms into a comfortable living room, surrounded by large white curtains and covered with large rugs.

In black suits and Borsalino, Leonard Cohen is elegance personified, who takes care to highlight its employees and listens respectfully their solos.

He kneels to interpret his most intimate songs ("Dance me to the end of love", "Bird on the wire" ...), beats the foot when it is crooner, playing guitar, keyboards or Jew's harp.

The voice is still serious, but now somewhat veiled when he sings "Suzanne" and "Sisters of Mercy".

The arrangements are often melancholic for very long versions of these hits, which dilute the intensity.

This felted highlights the strength of songs from his latest album "Old Ideas", published in January. Worn by jazz and blues tones, they are concentrated in the first part of the concert.

In the sitting room, the atmosphere is almost religious.

The audience applauded wildly between each song and even offers several standing-ovation to the poet. But when he starts to sing, the silence.

The concert suffers from this silent fervor until the second part, where Leonard Cohen force traces of humor and grace of "I'm Your Man" and "Hallelujah" finally manages to lead his audience in a final waltz. 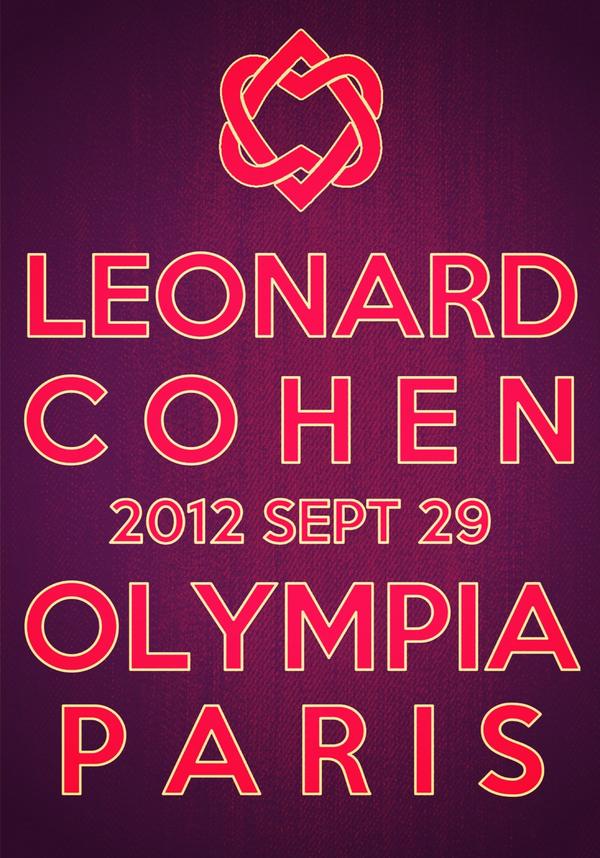 I was in Notre Dame cathedral this afternoon. I was admiring the statue of Sainte Jeanne D'Arc and thinking "if only ....."

Mabeanie1 wrote:I was in Notre Dame cathedral this afternoon. I was admiring the statue of Sainte Jeanne D'Arc and thinking "if only ....."

Same here. I was walking past the golden Jeanne d'Arc statue near the Louvre and started singing the song in my head. It would be THE place to play it on this tour.

Can't wait for tonight. I've got a feeling that this will be my best Cohen concert, the atmosphere in this old music hall must be fantastic. I've been there yesterday to watch the big red signs before the venue, and it already felt so special.

How amazing that song is and the people chearing when he sang "mais j'ai tant des amis".
In the concert reports(this site) Amsterdam, august 21th, is the partisan recorded , very beautifull lights!
I had the 4th row in front, so that was pretty amazing!
Bless, Prospera.
Top
Post Reply
113 posts