Greetings, santaevita! There is indeed said to be a full scale U.K. tour next year, so you should have more chances to see Leonard.

Meanwhile, here are my belated thoughts on last Sunday's show; though I've not much new to add to what most people will have read or experienced. For some six months, I didn't think I would see Leonard last weekend, as I was already committed to three days work at a conference near Cambridge. Despite this, the workings of the universe seemed to comply with my desire to be there. First there was the shift to Wembley, then the great seats being released one week before. I only just made it though, and after a morning of intensive work, I had to pack fifty boxes of books, help load them onto a van, and unload them back in London. I then had 15 minutes to get ready.

It was strange to arrive at a Leonard concert without any time for anticipation of what was to be. My heart sank when I arrived, and saw the queue extending for approximately two lengths of the Arena. This was decidely ironic considering that I had phoned Wembley earlier in the week to ask if tickets could be collected before the event, and was told that they had to be collected on the day. Grievances aside, I soon saw some friendly faces (Karen Edlin and Sue Merlyn); then due to the grace of God (and Leonard!), the start was delayed for half an hour, so we didn't miss anything. After some sorting of tickets amongst friends, I took my place in block A3 Row H, which was ideal for viewing the show. I soon discovered that Graham and Mandy Webb were sitting in row D, and was able to re-connect Graham with a friend of mine (a recent LC convert) who had known him through his work forty years ago. Everything went incredibly well; the people around us were fine, and cameras thankfully absent. That said, the quest for the loo did indeed take up most of the interval, so I'm glad that I managed to grab a drink on the way in.

I've almost run out of superlatives to describe the quality of Leonard's shows. All I can say is that they maintain a remarkable standard of perfection and excellence that reflect the workings of a double Virgo on the highest conceivable level! It was the first time that I had heard songs from "Old Ideas" live, and it was good to hear them. I was sorry not to hear my favourite "Show Me the Place" or "Different Sides", but who can complain when you still get three hours of Leonard at his best? Most of my all-time favourites were included...a lovely "Sisters of Mercy", "Anthem", "I Can't Forget", "Night Comes On" and "Take This Waltz" to name but five. The Webb Sisters were looking looking sophisticated and glamorous; it's remarkable how they do their cartwheel so effortlessly. I thought their version of "Coming Back To You" (another of my all-time favourite Leonard songs) was truly beautiful. I was also impressed by Javier Mas's amazing prelude to "Who By Fire, and Sharon Robinson's exquisite version of "Alexandra Leaving" which was definitely a show-stopper. We didn't get "Famous Blue Raincoat", but I've heard that live enough times. "Save The Last Dance" as a closer was fun; though I think that "Wither Thou Goest" is generally a better song to end with. In conclusion, everything turned out better than I may have dared to hope for. Fortunately, there was still a young lady selling programmes. She had only seen the show in part, but was genuinely enthusiastic about Leonard and his music.

I read your interesting views John I was in Block A row 3, (which I had for the Hop Farm) more or less in the centre and there were two empty seats one side of us, and two in front of us and the lady and her husband to the left of me had never been to a concert before and only booked their tickets two days before. They did not even know it was originally at The Hop Farm!
She thought the concert was 'OK' and probably would not want to see another. I thought of some of those true fans that could not get any nearer, or get as near as they would have been at the HF, probably getting their tickets last May. As they say 'life ain't fair'
Now fingers crossed for a UK tour, I am sure we will manage without the couple who sat next to us.
Somebody must have died for you
A Thousand Kisses Deep

Video uploaded by ann dunn - Thanks!

It was absolutely fantastic to see Leonard in concert again. I can't really add anything to the reviews already posted, so many of them have described so beautifully the magic that Leonard and his supporting musicians work when on stage. I'm looking forward to viewing the videos uploaded on youtube and reliving those wonderful moments.
I was pleased to hear Night Comes On, hadn't heard it performed in concert before, and a little disappointed not to hear Chelsea Hotel because that's one of my favourites (there are so many favourites ...) but I saw him perform it twice on his last tour so I shouldn't complain.
The only real complaint I have is that I found it so disrespectful when some of the audience (including a couple of people sitting in my row) got up many times during the concert to go to the bar - they didn't even wait until the end of a song before disrupting everybody in their row (and probably many others too).
I'm also keeping my fingers crossed for another UK tour next year.
Listening to Different Sides while typing this - bliss.
Top

somewhat_nifty wrote: I'm uploading video with my (slow) connection as I type - check out my youtube at http://www.youtube.com/messalina79

I was in row 14 & tried to video Famous Blue Raincoat, my favourite ever song for always, but the lady behind me got anoyed so I stopped. So lovely to see your videos from the front row!

My 'review' of e concert is here:

I loved it. Have never been as near to the front before at a LC concert so was in heaven. From where I was sitting the sound was wonderful, (but the lighting was distracting as the spotlight always seemed to be about 3 seconds late)

It was so lovely to be transported yet again to that wonderful place where I feel I am the only person at the concert, and to be so close I never once had to look at the big screens

Maybe next time I might get to the front row.... I have been trying for years!!!

I completely loved Sharon Robinsons rendition of Alexandra Leaving, it made me cry. Magical
Barbara

My dodgy recording of So Long Marianne from Wembley. (Complete with roaring drunk people...gwan Leonard Lad...

A very belated Hello to Gary and his sweet Mum who were at the Saturday Wembley Concert, centre Block A, Row 3. Not sure if you remember Annie and Susan but it was great chatting to you and hope to see you at a London concert maybe next year !!!
Top

Video uploaded by TribalChurch - Thanks!

Review from Uncut November of the Saturday Wembley concert.
Hope it is clear enough to read!
Ciarán 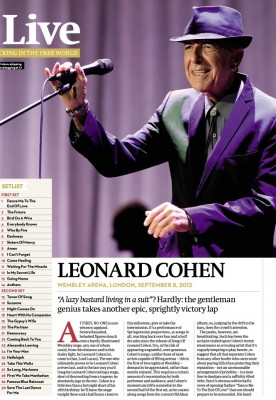 Video uploaded by jasontinmar - Thanks!

Two videos - uploaded by jnosullivan3 - Thanks!

catswhiskers wrote:I would be more than disappointed if there weren´t any UK dates come next year--I would be utterly heartbroken.
I have been reading all your reviews and it sounds amazing--just wish I could have been there.
I couldn´t make up my mind--but once changed to Wembley,I was still in two minds,but finally decided to hell with it--I´m going.Got ticket and was looking forward to Sunday.
I never went.My 18 year old much loved pussy cat was put to sleep that morning.Totally heartbroken and crying too much to make the journey.However all your wonderful comments have put a smile on my face,and warmed my heart.
So,roll on 2013,and many UK dates.I wonder when "the next leg of the tour"is likely to be announced...as I don´t want to miss out!!!!
Chris

so sorry to hear about the loss of your beloved pet, I know only too well of how heartbreaking this is.

Video uploaded by zodkavombie - Thanks!
I think "zodkavombie" is a member at the forum (Victorine)
This was uploaded on Sept 11 - and almost no views - some good video

Save the Last Dance For Me (including Leonard's closing comments)
http://www.youtube.com/watch?v=HS5r_6FNs4s

Hallelujah ("I did not come here to London to fool you")
http://www.youtube.com/watch?v=XmprLuMtxmg
Top
Post Reply
119 posts