Music magazine The WORD, Issue 108 - February 2012, has a very good review of 'Old Ideas' written by Dorian Lynskey.: About a page and a half, with 2 photos.
"Cohen: a poet with tunes, preoccupied with what Philip Larkin called "age,and then the only end of age".
"On GOING HOME the narrator forces Leonard ("a lazy bastard living in a suit")to sing about death("going home behind the curtain")when the singer would rather write "a manual for living with defeat". That's an elegant summary of a whole career spent confronting disappointment with dignity."
But it also has a caricature of Leonard and PJ Harvey on the front cover - the story "Whatever Happenned to Singing?"
The cover story is an article by David Hepworth : "What do we mean when we call somebody a great singer?Does it denote the ability to elicit tears, shatter glass or impress Gary Barlow? Or is singing music's most powerful way of communicating the uniqueness of a personality?In this celebration of the brilliant diversity of singing, David Hepworth tries to untangle the issues, while 21 writers and musicians pick the singers who do it for them." Mark Cooper, creative Head of LATER...etc) chooses Leonard Cohen.
- Dave
(Sorry, unable to provide scan).
"Politics is the art of looking for trouble, finding it everywhere, diagnosing it incorrectly and applying the wrong remedies"~ Groucho Marx
Top

Excellent, thanks Dave!
I'll try and get hold of it to scan the relevant bits.
"We are so lightly here"
Top

Has anyone seen the Feb issue in the shops yet (or know when it will be available)? My local store still has the Jan 2012 issue on the shelves.

My local newsagents say they'll have it tomorrow.
"We are so lightly here"
Top 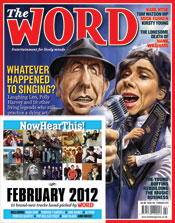 Hi Wendy,
My subscription copy usually arrives a few days before the new issue reaches the shops - so it should be available in the next few days.
From today it appears on the official website:
http://www.wordmagazine.co.uk/
- Dave
"Politics is the art of looking for trouble, finding it everywhere, diagnosing it incorrectly and applying the wrong remedies"~ Groucho Marx
Top

Thanks for the info Davido and remote. I will have another look for it on my next trip to the shops.

Sorry, but I've only got a cheap scanner. If you click on the pictures, though, and then on the magnifying glass, it gets clear enough to read. 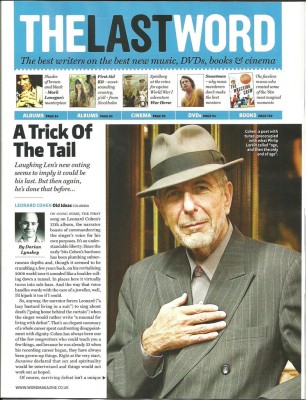 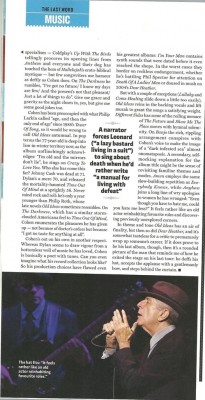 Correct me if I'm wrong, but isn't this last album thesis blown out of the water? The next album is already in the can?
http://www.breakfastintuscany.blogspot.com

And hopefully has Born In Chains on it.
Top

You two seem to have a great combination going!
....and I didn't need my magnifying glass to read it either.

This made me smile -

Can you even imagine what his record collection looks like?

Thanks for the information.
I didn´t kill myself when things went wrong
I didn´t turn to drugs or teaching
I tried to sleep, but when I couldn´t sleep
I learned to write.
I learned to write what might be read
on nights like this by one like me.

Jonnie Falafel wrote:Correct me if I'm wrong, but isn't this last album thesis blown out of the water? The next album is already in the can?

Indeed. Well, if not "in the can," it is at least in the works. The Man himself said so, right here on this forum (these reviewers ought to check in here from time to time. They might learn something!).
Top
Post Reply
19 posts