Setlists of the World Tour 2010

As promised:
Here is a picture of the set list in Stuttgart October 1st, 2010. 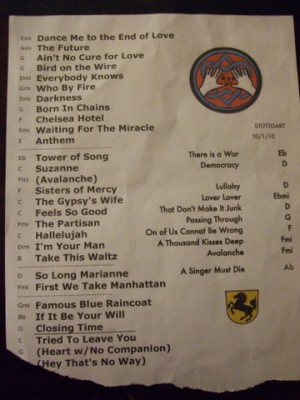 Katowice, 4th Oct
same as above (I think)

List updated upto Katowice, Oct 4 2010.
Thank you everyone for keeping the setlists coming!!!

suenodelasmanzanas wrote:As promised:
Here is a picture of the set list in Stuttgart October 1st, 2010.

thanks, I always love to see these sheets on stage, that show you, how a concert may be, but not, how the show realy has been.
When I see the songs on the right side, they really rehearsed One of Us Cannot Be Wrong, one of my favourites, the tour is not yet at its end, hope they play this song at least once.
It´s a little bit confusing, that 2 very different things are given here the same name: set list is used here for the report on how a concert really was played ( may it be from one who was there or from one, who noted the songs from a tape) and set list is used for the sheets on stage, that show you the songs, that definitely are intended to play and the ones in brackets, that might be exchanged with sogs from the right side. let´s end this kind of confusion and use terms they use since a hundred years in the Dylan scene:
set list is, what was really played, written down during the concert or after the show, listening to your (or another persons)tape
cue sheet we call the sheets, placed on stage from that you can see, what is standard and where there might be changes.

I just downloaded the Stuttgart concert - it´s clear, that I can tell you only in three hours from listening, what was really played. As this taper never made a mistake, the set list is:

(without Sharon Robinson for entire show)

My souvenir from Katowice, I think it fits in this section

Here is the Dortmund setlist Maarten 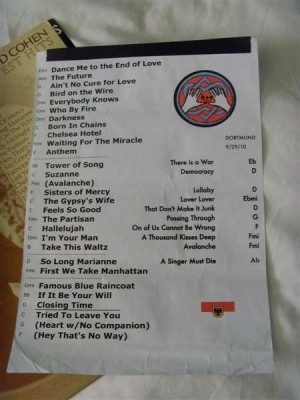 Katowice setlist should have:

Closing Time > Never Got to Love You (recited fragment).

leonardo has the point, these are set lists you are scanning here - stage list (actually performed set list) doesn't need to be the same. My idea was to check, as leonardo did, the tracklists at dimedozen.org and post them here, as we don't have confirmed setlists for last shows, apparently. Or I can't find it here in this thread for some shows last few days.

What's with Moscow, it had significantly shortened setlist?

I also have confirmation that in Stuttgart and Moscow Leonard introduced Born in Chains with the recitation of poem Dover Beach by Matthew Arnold.
Apparently, he's also introducing Closing Time with verse from Never Got To Love You.
Also, DrHGuy's blog informs that The Darkness in Moscow was introduced with recitation of poem Invictus by William Ernest Henley.
Leonard Cohen Newswire / bookoflonging.com (retired) / leonardcohencroatia.com (retired)
Top

tomsakic wrote: What does "Closing Time > Never Got to Love You" means, that he recited lines from Never Got To Love You AFTER the song?

Set One:
Dance Me to the End of Love
The Future
Bird on the Wire
Everybody Knows
Who by Fire
Hey, That's No Way to Say Goodbye
Darkness
Born in Chains
Chelsea Hotel #2
Waiting for the Miracle
The Flood (poem)-Anthem

2nd encore:
Famous Blue Raincoat
If It Be Your Will
Closing Time-Never Got to Love You

Ain't No Cure for Lov moved shockingly down the setlist! Ah, my old favourite close to being dropped out for good...

Edit. OK, I know the reason:


The show started 17min late because of an unexpected visit that former Polish president, Lech Walesa, paid backstage. Walesa is reported to have asked Cohen how long his show was going to last. When the artist replied, "We can go on for nearly four hours," the Nobel Peace Prize winner responded: "That's not unlike Fidel Castro!"

Set One
Dance Me to the End of Love
The Future
Bird on the Wire
Everybody Knows
Who by Fire
Hey, That's No Way to Say Goodbye
The Darkness
Born in Chains (without intro)
Chelsea Hotel #2
Waiting for the Miracle
Anthem (with speech; not The Flood) - Introduction

2nd encore:
Famous Blue Raincoat
If It Be Your Will (recitation + Webb Sisters)
Closing Time + Never Got to Love You (spoken)

3rd encore:
I Tried to Leave You
Speech + Ain't No Cure for Love

Final speech: It has come clear to me tonight that there's no cure for love! (something like that)
Leonard Cohen Newswire / bookoflonging.com (retired) / leonardcohencroatia.com (retired)
Top

Hehe, in Ljubljana, before the last encore, he said "OK, friends, we have to stop with this disease" (= neverending shows and love:)
Leonard Cohen Newswire / bookoflonging.com (retired) / leonardcohencroatia.com (retired)
Top