Hey friends, I'm sure some of you would support a 2011 LC Euralia Tour (as per your relocation below), say in our summer / your winter: 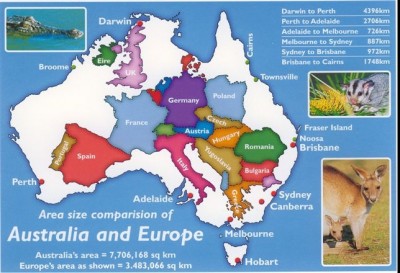 A study of the map and knowledge of our demographic distribution also suggests that you would be displacing probably no more than 5% of us (given that the location of our major cities is on the periphery of our land mass!

Anyway, I personally would welcome you all & it would provide a cheaper opportunity for a lot of Aussies to visit a big portion of Europe (that they might not otherwise experience).

It would certainly revolutionise the Outback for a time - but we're not talking about anything permanent of course!

P.S. I'm happy for you moderators to move this to 'Everything Else' if you wish!

Great picture Andrew.
I'll be on that tour. All you need to do is convince Leonard.
So Europe is less than 1/2 the area of Australia??? Wow! Is Europe that big?

We must catch up one day when I get to Melbourne next and have a beer and a chat.
Sometime this year I expect.

Regards, Mat .
"Without light or guide, save that which burned in my heart." San Juan de la Cruz.
Top

Hey Mat, that would be great

- just PM me when you're about to visit and I'll give you my contact details.

Also, I'm still thinking of organising an LC event down here, so I'll let you know about it when I get my act together in that regard (maybe by the time of LC's 76th birthday)!

Not sure exactly what kind of logistics you'd have in mind, Andrew... are you planning to move all the European Cohen fans in Australia, as your map shows?

Hey Laura, not just the Cohenite fans ...everyone who is prepared to hang on for the ride of a lifetime (and the good thing is there would be no need to queue at our immigration checkpoints - as we'd be overwhelmed and capitulate on that requirement for the length of Leonard's tour)!

It would be far more important to land the Europe "aircraft" safely, than anything else! Only quarantine requirements would be enforced, so no bringing strange little furry animals, plants or foodstuff etc!

I will reply when I've understood the original post! I like the map though. Does moving Europe to Australia free us from the ash cloud that is currently hanging over us? Come to think of it, we will probably need a cruise ship to get us to the southern hemisphere. Could LC and band provide the onboard entertainment?

I feel your frustration Andrew!

Maybe if this volcano in Finland keeps playing up, LC will have no choice but to skip Europe and come our way.

Mabeanie1 wrote:...Does moving Europe to Australia free us from the ash cloud that is currently hanging over us? Come to think of it, we will probably need a cruise ship to get us to the southern hemisphere. Could LC and band provide the onboard entertainment?
Wendy

Wendy, there’s no need to take a cruise ship. Iceland’s volcanic activity problem will hopefully be well and truly over by January. Irrespective, by taking that big slab of Europe holus-bolus (perhaps naming it ‘Starship Europe’) and attaching the engines somewhere around Greece and Romania, because you’d be flying in a south easterly direction, there would be no problem with ash intake (affecting the north and western areas) and (in answer to your first question) it would absolutely free you from that ash cloud, as the mighty craft would be dragging any areas affected by it out from underneath it as it moved off on its flight to the southern hemisphere!

[Okay, I must refrain from ingesting those “magic mushrooms”!]

About LC and band for entertainment, indeed they would surely do one concert on the 20 hour trip, before the tour in earnest started once "Starship Europe" had settled down on Oz!

However, you would not be able to leave your seats/cities to attend wherever the concert was being performed until some time after take-off - I'm sure you know the safety rules.

I'd be up for this, we'd definitely have the best of both worlds

It's a veeeeeery oooold map of Europe you got there, Andrew my man!

Tom, I have some objections to that map too. Romania also got inside the neighbouring country of Moldavia (but I don't mind, that's how it should actually be); I just supposed that watching from that distance, a country or two more or less just don't matter!

Western Australia is by far the largest state in Australia. We would be the sixth largest country in the world if we could get rid of the other states.

We have the most expensive houses in the world in WA http://www.realestate.com.au/buy/in-pep ... ion-search and look at the prices, top I have heard of was over $55,000,000

Still... How CLOSE Germany (Muenster!) would be to Perth all of a sudden... AND connected to a LC tour! *sigh* Yes, bring it on, I am all for it!!
"You thought that it could never happen / to all the people that you became"...
Love Calls You By Your Name
Top

Hey Tom (& Laura), you're both absolutely right, but this map was one I didn't produce myself - it's just "doing the rounds" here.

Furthermore, it's only an approximation in terms of land mass, as opposed to being an accurate and up-to-date representation of political configurations.