I LOVE the addition of Graham...so handsome! Left a comment on youtube saying how every time I watch your video I get all "warm and fuzzy"! Thank you SO SO much!

So handsome! I havent seen it yet (I can't see youtube at work) but it sounds like Arlene must have used the wrong photo!
Thanks so much Arlene for adding me in to the mix, it is a really lovely reminder (or it was before I was in there anyway .. . . ha)
g
If your life is a leaf that the seasons tear off and condemn
They will bind you with love that is graceful and green as a stem

I received another request to add a fan photo.
I am visiting family in Florida right now. My techie architect nephew, whom many of you have heard me talk about, helped me with the video update I just uploaded. So I have to put a deadline on the time for further changes.

If any other concertgoers would like to be included in the video, please
-send me a PM/email for my email address
-send your San Jose or Las Vegas photos to me ASAP
-identify everyone in your photo.

Hi Arlene and all...
I know that I am a new 'fan' of Leonard Cohen esp if I choose to compare to you all! But I have liked his songs for some time and have been a great lover of music for ever. I went to his Sydney concert because he has been an inspiration to many musicians I like and partly because of reputation.
And what happened to me!
As all forumers would know the concert was an absolute revolation, I was simply blown away by the beauty of the show and frankly I am now obsessed! I have been watching live in london and the isle of white shows tonight and I am again (and again) amazed at how great these songs are! They affect me so strongly.
My trip to the States was fantastic, I am so pleased I went and this is a really great momento and I really enjoy seeing all the people I share this love with! Thanks so much for adding me to this.
graham
If your life is a leaf that the seasons tear off and condemn
They will bind you with love that is graceful and green as a stem

Isn't it nice to know that there are 'normal' people that are as obsessed as you are - that's the beauty of this place. It makes us feel normal

Yes exactly! In fact I have become so sure it is normal when playing Live in London to someone and if they dont respond with tears and joy then I feel quite annoyed at them! I really am going nutty . . . ha!
g
If your life is a leaf that the seasons tear off and condemn
They will bind you with love that is graceful and green as a stem

Hi handsome Graham! your new name... I can totally relate to what you have been saying in the last posts...and I used to be 'normal' really I was...I am so happy for you that Australia seems to be in the near future...not confirmed but sounds like its a good possibility.
I hope you get to go...if not in Sydney then somewhere in that beautiful country of yours. Let me know if I have sent you the couple of 'handsome' photos I took of you in LV and SJ. Can't remember if I sent them or not...
Love Leslie
glad you are in the video as I have such warm memories of you...

It does seem that Australia and New Zealand are definite possibilities and I must admit I will be dissappointed now if it doesn't happen.
I will go here and also in New Zealand if I get the chance. I would love to take my family along, they missed the first one and have had to put up with me ever since! They are all in NZ so I am hoping to add to my tally by a good two or three more!
I have not received any photos, neither handsome or not! ha. .
g
If your life is a leaf that the seasons tear off and condemn
They will bind you with love that is graceful and green as a stem

Thank you for sending me your photos so quickly and a special thank you to Mutti/Leslie and Diana/ladydi for your help.

Looking forward to seeing LC again in 2010! Regards to everyone 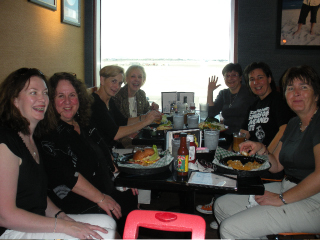 A large group of us took the same Southwest Airlines flight from Las Vegas to San Jose on November 13th. It was a lot of fun!
I am not sure if anyone has mentioned that once we were all seated the flight attendant welcomed all the Leonard Cohen forum members on the flight and mentioned that Mary and George were to come forward and get off the plane immediately as there was a private jet waiting for them in the wings...I had handed him a note to read out before he started the flight announcements..(chuckle chuckle)
after he read this he then got word that the plane had a problem and we all had to get off and wait for another plane.
We all sat in the waiting room and miraculously within an hour or shortly thereafter boarded another plane.
Here are some photos of a meal before the flight, waiting between flights...note Irish Mar's scowl and boarding the plane...
I will put more photos on the next post. Thank you Arlene for helping me post the photos!
Enjoy! Mutti Leslie 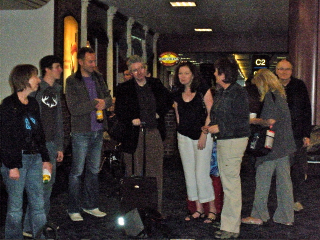 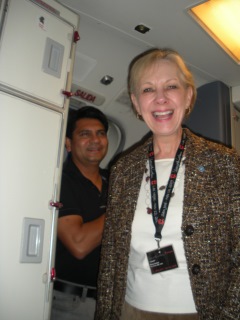 more on the way to San Jose... 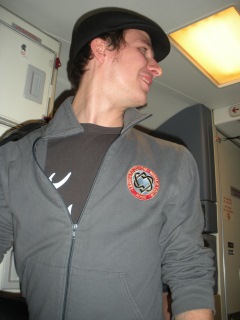 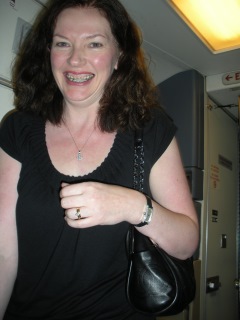 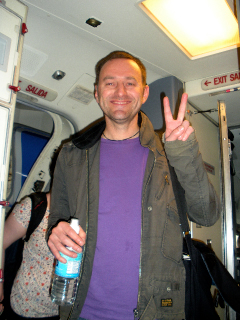