From The New York Times -


September 24, 2009
Leonard Cohen’s Legacy for His Concert in Israel
By ETHAN BRONNER 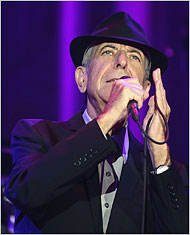 Those seeking to ostracize Israel through an international boycott demanded that he call it off. When he offered instead a matching concert in the West Bank, Palestinians said no thanks. Amnesty International agreed to help him distribute the concert’s proceeds to peace groups; Amnesty International withdrew. Then last Friday, three days before turning 75, Mr. Cohen collapsed onstage in Valencia, Spain, in the middle of his classic “Bird on a Wire” and was rushed to the hospital.

But he recovered from what was food poisoning or stomach flu, performed smoothly on Monday in Barcelona and is now in Tel Aviv, his manager, Robert B. Kory, said by telephone. Mr. Cohen, he said, is “in great shape.”

Mr. Cohen has billed the performance, in front of 47,000 in the soccer stadium of the suburb Ramat Gan, “A Concert for Reconciliation, Tolerance and Peace” and is giving the expected profits of $1.5 million to $2 million to a new charity he has created of the same name, run by a board of Israelis and Palestinians, which will distribute money to groups focused on coexistence here.

In particular, Mr. Kory said, the money will go to organizations composed of people who have paid a great personal price because of the dispute and yet are working for peace. Prominent among such groups is the Parents Circle — Families Forum, made up of Israelis and Palestinians who have lost close family members to the conflict.

“When people meet face to face, the walls fall,” said Roni Hirshenson, one of the Israeli founders of the 14-year-old group, who lost his son, Amir, in 1995 when two Palestinian suicide bombers mingled among a group of Israeli soldiers waiting at a bus stop. “We reconcile by learning each other’s narratives, both personal and national.”

Ali Abu Awwad, who lost his older brother, Yusef, in late 2000 to Israeli soldier gunfire outside their village near the West Bank city Hebron, said that the Parents Circle reached out to him and saved him from the depths of anger and despair. He is now an activist promoting nonviolent resistance among Palestinians.

Asked his view about the boycott of Israel, Mr. Awwad said: “We have to open our doors so the whole world can see what we the Palestinians are facing. We should not stop any voice for peace because at the end of day being angry and boycotting will not help. I believe Leonard Cohen has taken a very important step, using his power and investing his energy into finding a solution.”

Mr. Cohen’s goal is larger than this single concert. He wants to inspire fellow musicians to donate the proceeds from one performance in the coming year to Israeli-Palestinian groups focused on reconciliation.

“We’re hoping this is an invitation,” said Mr. Kory, who will be on the board of the new charity. “There are many conflicts and much suffering in the world, but this is one that really puts the whole world at risk and is really worthy of attention.”

Mr. Cohen, who feels his Jewish identity keenly, last performed in Israel more than two decades ago. He also performed for Israeli troops during the 1973 Middle East war.

Efforts to persuade popular artists to boycott Israel have had mixed results. The Pet Shop Boys, Lady Gaga and Madonna have all performed here recently. Madonna, an avid follower of the Jewish mystical tradition called cabala, even wrapped herself in an Israeli flag at her concert and asserted that the country was “the center of the world’s energy.”

Seeing this thread was my dream for a very long time. Now it's finally happening.

I wish I was there

Please guys, post an update as soon as you can, we're all waiting for news, videos and pix

Looking forward to reading about this one, hope he does a cracking show for you guys

And thank you, Sturgess66, for the NYTimes article. I enjoyed reading it - a balanced, respectful and correct way of discussing the topic - especially after this spring's call for boycott drama. It has a sort of subliminal way of stating the Our Man was powerful enough to silence the uncalled for noises. He has found a better solution to ongoing local drama - solidarity.

I am sure that this concert will stand as a major landmark in Leonard's career and in the life of everybody present there. We shall all be there, in thought and soul, dear friends, and we rely on your eyes to see for us, on your ears to listen for us, and on your heart to feel as we would feel!

I saw a photo of the Stadium on another thread - it is really impressive! To think that everybody will murmur the song lyrics and cheer for Leonard's concert... simply fabulous!

I'll be here, on the forum, ready to read everything you will tell us from Tel Aviv!

Have a wonderful evening with Leonard, dear Israeli friends and Cohenites from all over the world that were lucky to get a ticket for this concert!

Visiting some families at the meet and greet at Cohen's gig was truly an honor!!!!

"There is no guarantee that Palestinian groups will accept any of the money. Palestinians are against what they call the "normalization" of relations with Israel while what it considers the occupation of Palestinian lands continues are urging small groups to reject the funding."


Leonard Cohen is in Israel bearing an olive branch, with a concert Thursday night slated to fund the movement for peace.

The Tel Aviv show is sold out, but like everything to do with Middle East politics, planning it has been fraught with dangerous politics.

Cohen is calling the gig A Concert for Reconciliation, Tolerance and Peace and plans to give the expected profits of $1.5 million to $2 million to a charity he has created of the same name.

The Montreal-born singer has run into problems from the moment he announced the show in Israel, where he has not played for more than 20 years.

The Palestinian Committee for the Academic and Cultural Boycott of Israel, the same group opposed to the recent spotlight on Tel Aviv at the Toronto International Film Festival, asked him to cancel the concert.

Cohen, who is Jewish, responded by offering to perform in the West Bank, but that offer was rejected by the same Palestinian group.

He had asked Amnesty International to help him distribute the funds, which Cohen hoped would advance smaller groups that work for the co-existence of Israelis and Palestinians.

But Amnesty backed out of that arrangement and Cohen had to start his own charity, run by a board of Israelis and Palestinians, to distribute money to community groups.

There is no guarantee that Palestinian groups will accept it. Palestinians are against what they call the "normalization" of relations with Israel while what it considers the occupation of Palestinian lands continues are urging small groups to reject the funding.

The Parent's Circle, which unites Israeli and Palestinian families who've lost loved ones to the conflict, is one of the groups set to benefit from Cohen's peace fund.

Member Ali Abu Awadd , whose brother was killed by Israeli gunfire at a checkpoint in 2000, says he doesn't see how refusing Cohen's money would help Palestinians.

Awadd said he doesn't believe hatred will bring back his brother, nor does he agree with banning Cohen from the West Bank.

Cohen has said he wants to inspire fellow musicians to donate to Israeli-Palestinian groups focused on reconciliation.

http://www.cbc.ca/arts/music/story/2009 ... cohen.html
We are so small between the stars, so large against the sky
Top 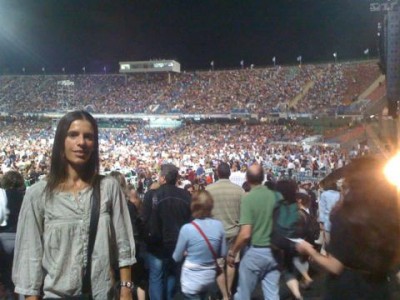 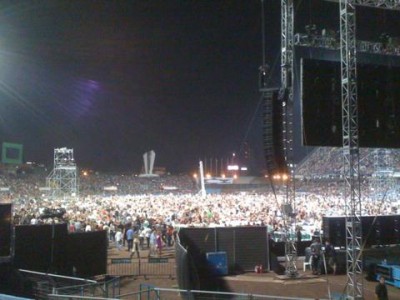 The crowd at Glastonbury last year was quoted to be around 50,000 but being a festival there would be no way of confirming that.
This must at least be the biggest seated audience.

While we wait - here is a little video clip from the Jerusalem Post about Leonard in Israel. And thanks go to DrHGuy - I found it at his site.

I just posted this and a couple of photos at my blog- http://1heckofaguy.com 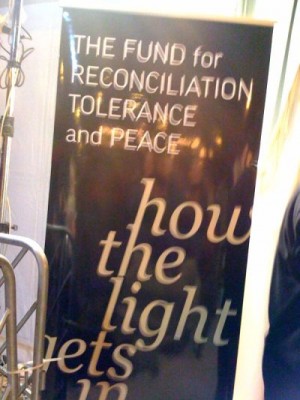 The concert began on time with the crowd easy and happy.

After “Ain’t No Cure” and “Bird On The Wire,” Leonard Cohen addressed the audience in Hebrew, saying


It is an honor to play here for you here in Israel (…) We are going to give you everything tonight, for peace, for you and us…