maretschkou wrote:If It Be Your Will
(Someone is yelling something - does anyone know what they are saying? And Leonard says "I think it's good?" - and there is laughing. He has a difficult time starting the song!)
http://www.youtube.com/watch?v=5gDc9vS1f8g

I have heard a female voice coming from the first rows with a confession of love on what Leonard answered "Sounds good" , what made people laughing but I was quite far away from the stage and I may be wrong.

Thanks marestshkou!! That sounds like a very plausible explanation.

that woman cried :"I want a communist freddom". Incredible .. no ? D'you still think it's a kind of confession of love ?

Perhaps it was a 'declaration of love' for Dino Soldo? I saw a recent YouTube video in which Dino raises the communist fist after or during one of his solos. Just spent two (enjoyable) hours going through clips of recent concerts trying to find the relevant moment, but no luck. Does anybody remember which one it is? It's driving me insane!

Wahey! Got it! And even though I am probably the only one interested in this, I shall post a screenshot, just because I think Dino is so cool and I want everybody to know it!

Perhaps the lady in question saw him in Lisbon?

(or perhaps she saw albertnoonan's fabulous clip on YouTube...) 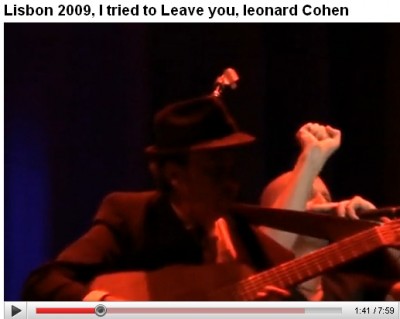 One thing more... when you raise the fist is it necessarily a communist fist ?

I want a communiste freedom" she said .. yeah !

"Give me back the Berlin wall, give Stalin and St Paul ..."

I think it is the communist salute, but if anyone knows better, please let us know. Have a quick look on Google images with "communist fist" as search words... I believe it is used more freely nowadays, as a sign of assent with anticapitalist/loosely Marxist/power to the people ideas. That's how I take it anyway, which is why I said I thought Dino Soldo was cool. It was perhaps a way for him of saying: "I'm on the side of the people, of the oppressed, Power to the People"! But of course, he alone can answer the question of what this clenched fist meant to him.

Not wishing to get into politics, especially as I am not qualified, I think that it is not quite fair to equate communism and Stalin. In France - where the particular person was disrupting the concert with her slogan - the far left scored highly in the 2007 general elections: the Revolutionary Communist League got 4%, the French Communist Party almost 2%, Workers' Struggle, Altermondialists and Workers' Party, 3% altogether. That's a total of 9% of all votes! I very much doubt that many of the voters were in favour of a communist dictatorship, purges, gulag labour camps... It was almost double that I believe in 2002 (17%), which explains partly why Le Pen made it to the second round, and people ended up having to choose between the right and the far right. So Leonard Cohen was certainly spot on when he claimed, as you quote, that "Notre époque connaît tellement de problèmes, c'est facile pour la droite de poser ses pièges."

Hope this answers your post! I really don't wish to get into a defense of Communism (especially as I am not a supporter myself). As I said, I took the clenched fist salute to mean something cooler...

Edit: One last thought. You may want to remember that the Resistants that Leonard Cohen describes in The Partisan were almost all communists. As far as I know at least.


Thanks for your intense and precious answer.
I respect the communist ideas : many intersting things in those.
But can we forget what happened in the 20th century ?
Ideas can help you when you fight : fitghting has something to do with destroying...
Building has something to see with generosity ; that’s the problem if you have to many ideas ( “l’enfer est pavé de bonnes intentions”) If you are too dogmatic you’ll continue to destroy.. A “ slogan” can be dangerous even if the ideas which are behind are generous.

on the web you can find some extracts of a LC’s concert (1985 in Varsow for Solidarnosc). I transcripted for you there some parts of the LC’speaking. It has someting to see with our discussion :

(http://www.youtube.com/watch?gl=FR&hl=fr&v=wHAHt2Hv_DI)
“I don't know which side anybody's on anymore and I don't really care. There is a moment that we have to transcend the side we are on and understand that we are creatures of a higher order. That doesn't mean that I don't wish you courage in your struggle. there is on both side of this struggle men of good will : that is important to remember. On both side of the struggle. Some struggling for freedom. Some struggling for safety.”


(http://www.youtube.com/watch?gl=FR&hl=fr&v=qF8MrGyeeqg)
“Since I have been here many people have asked me what I thought about everything there is ???. I don't know the answers ?? I just come here to sing this songs that have been inspired by something that I hope who is deeper and bigger than myself. I have nothing to say about the way that Poland is governed. I have nothing to say about the reisstance to the government. The relationship between the people and the government in an intimate thing. It is not for a stranger to come in. I know that there is an eye that watches all of us. There is a judgment that ?? everything we do. And before tis great force which is greater than any government I stay ?? and I kneel in respect”

Introducing who by fire at the begining of the show :
“[...] I respect your struggles and it may surprise you but I respect both parts of these struggles. It seems to be that in Europe they need to be a left foot and a right foot to move for. I wish that both feet move forwards and the body moves towards it’s proper. [...] I sing for everyone. My songs have no flag. My songs have no party. [...] May the lord put a spirit of wisdom and understanding into the hearts of your leader and their counsellors.”
.


(And in Hallelujah, do you remember ?
“I've seen your flag on the marble arch
Love is not a victory march
It's a cold and it's a broken Hallelujah” )