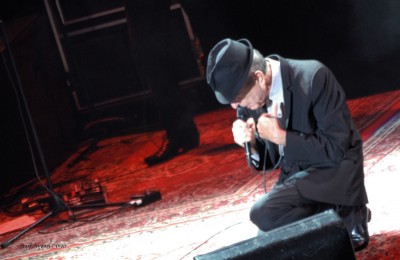 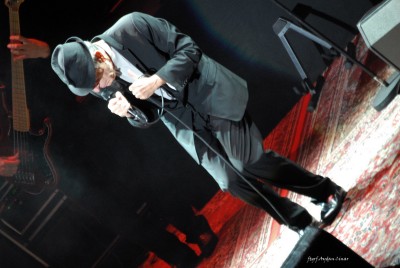 Re: Photography by Aydan CINAR 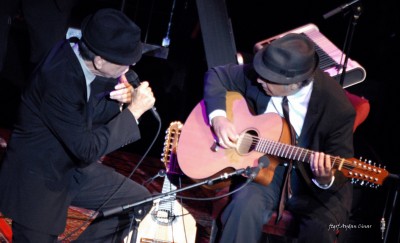 Re: Photography by Aydan CINAR

that was amazing.. marvelous concert that I've ever known...
it's honour to see you in Istanbul

I am not very good with words, I know sometimes my choice of words tend to kill the meaning... My first Leonard Cohen Concert.... And since last night's three hour journey through all the emotions in the literature, I find myself haunted by Famous Blue Raincoat of last night...and then...The Partisan....and then....I'm Your Man....If it be your will, that I speak no more...

I said I am not good with words before right... I am not... I think I will just let the tears I had been fighting roll down after I am done sending this message... To much emotion I can't contain it.........
Top

Long time ago, When I was a little child ,listening your song "waiting for the miracle" ... I have not been able to understand english in that time, but someting was extreemly so familiar, so deeply internal.. I was losted my dad ( hope ,rest in heaven) and I felt like lost, praying and waiting for the miracle... Until yesterday, I could not describe to what is that song mean to me before, but now from his great voice , it is eternal hope!

Thank you so much Mr. Cohen... I remember everything again and again to my tears endlessly with you, your voice and poems.. expecially with " waiting for the miracle".

It is honor to meet with you and your fabulous friends in Istanbul - Harbiye Open Air Theatre. Hope to see you again ...

That was the best concert in my life. Thank you.. !

blixa wrote:I am not very good with words, I know sometimes my choice of words tend to kill the meaning... My first Leonard Cohen Concert.... And since last night's three hour journey through all the emotions in the literature, I find myself haunted by Famous Blue Raincoat of last night...and then...The Partisan....and then....I'm Your Man....If it be your will, that I speak no more...

I said I am not good with words before right... I am not... I think I will just let the tears I had been fighting roll down after I am done sending this message... To much emotion I can't contain it.........

Two threads about the first Istanbul show were moved from the News section to Tour in Europe Summer 2009, and then merged with another report into general thread for both Istanbul shows. (The 2nd one is tonight!)

A couple of reviews and article on Leonard's Istanbul concerts from Turkish online newspapers (in English), in case you have not already picked them up.

This will be my first post though I'm kind of a long-time-reader, so please forgive my mistakes.

Last night was my very first -and probably the last, not only because of Mr.Cohen's age, but also because of mine- L Cohen concert. I had been waiting for months, and here in Turkey we literally waited for this miracle for a long, long time. I cannot easily write down what I feel right now, each and every song was so beautiful, and I was so close to the stage, so close him, and there were so many people with fedoras and so many people with wide smiles of witnessing this divine event..

Of course, our dear one came on the stage exactly at 21:00, and of course, he started with a beautiful Dance me the End of Love, I can't remember much about te first couple of songs, I just looked at Mr.Cohen, then at Sharon Robinson, then at Javier Mas, and Webb Sisters, Roscoe Beck, everybody, everybody on the stage.. Were they real? This night.. had it come at last?

After watching so many videos, reading so many concert reports and listening his records for a long -well, that can be taken relatively, I'm fifteen- long time, seeing all those wondrous people was unbelievably beautiful for me. And I guess Leonard has rewarded us with a wondrous setlist, the most confused ones were the biggest fans, I guess, when we heard the words "I remember you well, in Chelsea Hotel", we did not expect, we did not hope it to be in. So beautiful. And when it was the time for Waiting for the Miracle, we were relieved, looking at the miracle in front of us. It is nomore such an original phrase, but we could really watch just L.Cohen, even if he had not sung a single note.

And what a "Who by Fire" was that, Javier Mas' solo intro was about three minutes, and it brought the audience to the point of fainting from pleasure. Actually, we were kind of a good audience, there was no fabulous singing along in Marianne like it the ones in Dublin, Venice and Lisbon, but, for example, at the ending of I'm Your Man, Mr.Cohen just looked at us and we shouted, I guess all four thousand of us, "I'M YOUR MAN!".

When the first part was over, I felt happiness and utter pain together. Here was the show, here was the man and his band, but half of the show was already consumed by our hungry hearts and after the second half, the man and his band was to go, to leave us and our city. I knew that I will never feel the same. I still cannot dare and touch my IPod.

And what a beautiful second part was it, The Partisan, Tower of Song, Everybody Knows, the beautiful essence in the air, the smile on Leonard's face, Dino Soldo's enjoyable gestures, Sharon Robinson's and Charley and Hattie Webb's beauty, Lord, how adorable was the slight flitting of their hair in both the artifactal and the natural wind, and how lucky I was to be able too see that.

And when he said " I didn't come here to the great city of İstanbul just to fool ya ", we could do anything to take the time back. But the time kept passing as the notes floated, and when he said my favourite lines in Closing Time "I loved you for your beauty, but that doesn't make a fool'o me, you're in it for your beauty too" I wanted to cry, the dream was almost over, leaving bitter memories and a longing for a next time, which I hope so much to happen.

And when he left the stage, it was as unbelievable as the moment that he entered in. I looked at the emptied scene and wondered, if one experiences such a pleasure in fifteen, what can give him further awe and pleasure to him? What miracle can be more beautiful than this one? Whom music can I listen to but L Cohen's, and which record can I listen to with the same joy if there won't be a "Live in İstanbul?" ( no, even a fabulous record of the concert would not give the same pleasure, I know..)

It was quite hard to find and buy a ticket for me, and later it was a miracle - I keep using and using this word, but so many miracles happened in and about the miracle itself- to get a ticket in the 3rd row. I, unfortunately, cannot take the first flight to the next destination of Leonard and the band, but I would merrily spend months watching them over and over again, night after night, and following them wherever they go..

It was not the best concert of my life, it was the best night of my life-- please do not undertake fifteen years.

And if there were anybody from the forum, yes, I was the boy with the fedora, the vest and the spectacles.

It is quite an over-emotional and long entry with probably numerous weak points and grammar mistakes in it, so if you read this far, I thank you.

Fedora.... what a great first post! Thank you for sharing with us...

My son was there with you last night, and I know he will have had a wonderful experience - his first Leonard concert was in Manchester last year.... he bought me a ticket, but I couldn't get to Istanbul at short notice, so his girlfriend experienced her first evening with Mr Cohen last night...

Memories to treasure for ever....

Hi Fedora,
you are lucky because he also played Chelsea Hotel last night, the first night this beautiful song was not on setlist... But I thought the first nights crowd was better than the second night. It was great pleasure to see L.Cohen on stage. I was waiting for this wonderful experience in last 20 years... We all know the world is full of pain and suffering but after seeing L.Cohen back to the stage dancing, smiling I got a hope and there is a smile on my face... I'm really happy to live this experience... Thanks to everybody who loves Leonard Cohen all around the world... For keeping his songs alive...
Top

Thank you, Blixa, Eymen and Fedora, for your heartfelt and powerful descriptions of the concerts in Istanbul. Fedora, you took me back to experience in my mind the concerts I have been to, and that sense of wonder and miracle at what is unfolding.
Best regards,
Sue
Top

Fedora,
thanks for your beautiful words. your emotions traveled the way from Turkey to Israel straight in to my heart. it seems like another magical night.
I share the desire to have been able to leave everything behind and travel the route of the tour... and hope to be able to write just as beautifully following the concert in Tel Aviv.
2009 Tel Aviv; San Jose
2010 Sligo [x2] ; Las Vegas [x2]
2012 Berlin; Paris; New York, Brooklyn
2013 London (Sept); Amsterdam
Top

Does anyone remember what Leonard's Blessings were - usually four - following, Whither Thou Goest?

I am trying to compile LC's "Priestly Blessings" from as many concerts as possible.
Thank you to those who have already responded in other threads with a written version and youtube links.