THE FLAME: FOREWORD by Adam Cohen

THE FLAME: FOREWORD by Adam Cohen 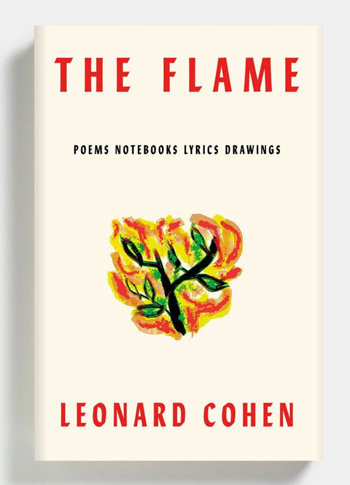 In honour and in celebration of his father's 84th birthday, Adam shares with Leonard's friends the Foreword he wrote to his father's last work, The Flame:

This volume contains my father's final efforts as a poet. I wish he had seen it to completion—not because it would have been a better book in his hands, more realized and more generous and more shapely, or because it would have more closely resembled him and the form he had in mind for this offering to his readers, but because it was what he was staying alive to do, his sole breathing purpose at the end. In the difficult period in which he was composing it, he would send "do not disturb" e-mails to the few of us who would regularly drop by. He renewed his commitment to rigorous meditation so as to focus his mind through the acute pain of multiple compression fractures and the weakening of his body. He often remarked to me that, through all the strategies of art and living that he had employed during his rich and complicated life, he wished that he had more completely stayed steadfast to the recognition that writing was his only solace, his truest purpose.

My father, before he was anything else, was a poet. He regarded this vocation, as he records in the notebooks, as some "mission from G-d." (The hyphen indicated his reverence to the deity; his reluctance to write out the divine name, even in English, is an old Jewish custom and is further evidence of the fidelity that he mixed with his freedom.) "Religion, teachers, women, drugs, the road, fame, money... nothing gets me high and offers relief from the suffering like blackening pages, writing." This statement of purpose was also a statement of regret: he offered his literary consecration as an explanation for what he felt was poor fatherhood, failed relationships, and inattention to his finances and health. I am reminded of one of his lesser-known songs (and one of my favorites): "I came so far for beauty, I left so much behind." But not far enough, apparently: in his view he hadn't left enough. And this book, he knew, was to be his last offering. 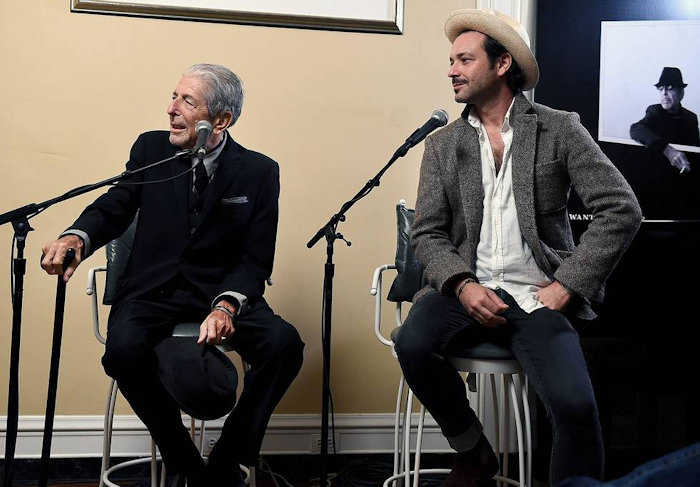 As a kid, when I would ask my dad for money to buy sweets at the corner store, he'd often tell me to search the pockets of his blazer for loose bills or change. Invariably, I would find a notebook while going through his pockets. Later in life, when I would ask him if he had a lighter or matches, I would open drawers and find pads of paper and notebooks. Once, when I asked him if he had any tequila, I was directed to the freezer, where I found a frosty, misplaced notebook. Indeed, to know my father was (among many other wondrous things) to know a man with papers, notebooks, and cocktail napkins—a distinguished handwriting on each—scattered (neatly) everywhere. They came from nightstands in hotels, or from 99-cent stores; the ones that were gilded, leather-bound, fancy, or otherwise had a look of importance were never used. My father preferred humble vessels. By the early 1990s, there were storage lockers filled with boxes of his notebooks, notebooks containing a life of dedication to the thing that most defined the man. Writing was his reason for being. It was the fire he was tending to, the most significant flame he fueled. It was never extinguished.

There are many themes and words that repeat throughout my father's work: frozen, broken, naked, fire, and flame. On the back of the first album cover are (as he put it in a later song) the "flames that follow Joan of Arc." "Who by fire?" he famously asked, in a song about fate that wickedly made use of a Jewish prayer. "I lit a thin green candle to make you jealous of me." That candle was only the first of many kindlings. There are fires and flames, for creation and destruction, for heat and light, for desire and consummation, throughout his work. He lit the flames and he tended to them diligently. He studied and recorded their consequences. He was stimulated by their danger—he often spoke of other people's art as not having enough "danger," and he praised the "excitement of a thought that was in flames."

This fiery preoccupation lasted until the very end. "You want it darker, we kill the flame," he intoned on his last album, his parting album. He died on November 7, 2016. It feels darker now, but the flame was not killed. Each page of paper that he blackened was lasting evidence of a burning soul.

Thank you, Jarkko, for posting & thank you to Adam for honoring your beloved father by sharing your wonderful insights & very touching memories in this beautifully written foreword. Your words are greatly appreciated & will be cherished.
Top

I too will add a thank you to Jarkko for posting this. Also many thanks to Adam for his words dedicated to his father and his father's utmost efforts to complete this last offering for all of us.
As I was reading, these words came instantly to my mind:

“and my father's hand was trembling
with the beauty of the word.”

Also a bit of kismet happenstance here - Adam says one of his favourite songs is Came So Far For Beauty and that was the line we choose to write on LC's memorial bench plaque at Hydra.
It doesn't have to be perfect, it just has to B4real ~ me
Attitude is a self-fulfilling prophecy ~ me ...... The magic of art is the truth of its lies ~ me ...... Only left-handers are in their right mind!
Top

This is beautifully written. I am especially taken by this passage:


he wished that he had more completely stayed steadfast to the recognition that writing was his only solace, his truest purpose.

I find it remarkable that Leonard Cohen, who has left a body of work in the English language that stands up to anything written by anyone, ever, would have regrets around not embracing it enough. What more could he have given to the world?
I love to speak with John
He's a pundit and a fraud
He's a lazy banker living in a suit

Kiitos, Jarkko. And thank you, Mr. Adam Cohen. Thank you so much for sharing.
Top

I have just finished reading The Flame. I prefer the canadian cover version published by McClelland & Stewart, is definitely the most loyal to the content of the book.
Top

adam cohen talks to will gompertz about the flame - 07.55 hours approx as broadcast.

Chimney flames
November again
I feel like a Leorphan
Top

Now I have read through this thread, and am feeling a searing, poignant sadness in reading especially Adam's words about Leonard, sharing his private insights into his father, and various means of finding them. We have lost Leonard and Marianne and Esther and Irving Layton and Judith Fitzgerald and more. We are privileged to still have Adam.
"Be yourself. Everyone else is already taken."
~ Oscar Wilde
Top

I have yet to begin reading this book in my hands.
What I resent in reviews is people's tendency to speak of it as pedestrian, uneven, and banal. I remember when I first looked at the photo collection of US here, in the section Jarkko created, Beautiful Losers. Throughout those pages are exceedingly unflattering photos of Leonard, a kind of implicit acknowledgement for everyone's benefit that not all photographs of us are good ones... which, in turn, served as implicit permission and encouragement for us to post a photo of ourself.

From what I've read in comments and reviews, Leonard appears to have done a 'show and tell' for everyone through this book. He KNEW all its entries were not perfect. He knew that he did not have the time to make them so. We have regularly credited him with being brilliant. He has steadfastly and in humility tried to tell us, to impart to us, how much work he had to put into his songs and his poems, his struggles with every word. That these great works did not just 'happen'!!

So, now, we get to see for ourselves what he has shared with us, his vulnerability, as he included so many UNfinished works!! Hard wrought final pieces they would have ended up had he the time.

To me, this serves as ENCOURAGEMENT to all who would write poems, songs, books, showing us that even the brilliant Leonard Cohen sometimes started out with trite phrasing, mundane ideas and words, as he wrestled with them word by word, and line by line, to get to the finished product. And never did find a word that adequately rhymes with orange. He shares with us the process of that most meaningful exercise and enterprise. Kudos to you, Leonard, for your humility, your caring, and your willingness to make yourself vulnerable, when you're not even around any longer to respond, at all.. an act of generousity for the ages. Thank you, Leonard, for your unfailing encouragement of all people.
"Be yourself. Everyone else is already taken."
~ Oscar Wilde
Top
Post Reply
12 posts • Page 1 of 1

Return to “THE FLAME - news and information”