Say a prayer for the cowboy...and Darker Album

Say a prayer for the cowboy...and Darker Album

Say a prayer for the cowboy

Today is Wednesday. On Tuesday I found out that on Sunday a recent friend of mine was killed while riding his Harley out on a country road, virtually no traffic, just an ordinary set of circumstances and perhaps just a bit too much bravado…for the last time…but it was bravado that made him beautiful…
He was a cowboy. He rodeo’d the steers in his youth, worked on stations/ranches noting the superior understandings of aboriginal stockmen who worked the land and the animals. And despite his initial lack of talent and bushcraft he slowly learnt how to be a stockman, a cowboy; an Australian bushman, tough and self-reliant like any good cowboy…
…mulling over this life well lived to the age of 63 a tune began to echo around my brain; I knew just one line, “Say a prayer for the cowboy”…and no more. Who wrote it, I wondered several times and then I googled it of course and low and behold…”Leonard Cohen” ! I read the lyrics then played the song and I realised my newly deceased buddy would have been Leonard’s sort of man.
So I wallowed for a time in the beauty of my two lost friends…

Say a prayer for the cowboy
His mare's run away
And he'll walk til he finds her
His darling, his stray
But the river's in flood
And the roads are awash
And the bridges break up
In the panic of loss.
And there's nothing to follow
There's nowhere to go
She's gone like the summer
Gone like the snow
And the crickets are breaking
His heart with their song
As the day caves in
And the night is all wrong
Did he dream, was it she
Who went galloping past
And bent down the fern
Broke open the grass
And printed the mud with
The iron and the gold
That he nailed to her feet
When he was the lord
And although she goes grazing
A minute away
He tracks her all night
He tracks her all day
Oh blind to her presence
Except to compare
His injury here
With her punishment there
Then at home on a branch
In the highest tree
A songbird sings out
So suddenly
Ah the sun is warm
And the soft winds ride
On the willow trees
By the river side
Oh the world is sweet
The world is wide
And she's there where
The light and the darkness divide
And the steam's coming off her
She's huge and she's shy
And she steps on the moon
When she paws at the sky
And she comes to his hand
But she's not really tame
She longs to be lost
He longs for the same
And she'll bolt and she'll plunge
Through the first open pass
To roll and to feed
In the sweet mountain grass
Or she'll make a break
For the high plateau
Where there's nothing above
And there's nothing below
And it's time for the burden
It's time for the whip
Will she walk through the flame
Can he shoot from the hip
So he binds himself
To the galloping mare
And she binds herself
To the rider there
And there is no space
But there's left and right
And there is no time
But there's day and night
And he leans on her neck
And he whispers low
"Whither thou goest
I will go"
And they turn as one
And they head for the plain
No need for the whip
Ah, no need for the rein
Now the clasp of this union
Who fastens it tight?
Who snaps it asunder
The very next night
Some say the rider
Some say the mare
Or that love's like the smoke
Beyond all repair
But my darling says
"Leonard, just let it go by
That old silhouette
On the great western sky"
So I pick out a tune
And they move right along
And they're gone like the smoke
And they're gone like this song

…and I realise now how this song of Leonard’s relates to the cowboy resonating in the “You want it Darker” album.
“Oh the world is sweet
The world is wide
And she's there where
The light and the darkness divide”

Leonard was a cowboy at heart, and just as importantly, at soul…
(sure, the lost and absent mare is the girl...and she is also his soul, to this cowboy...)
…say a prayer for the cowboy…
...those cowboys...

Hello Mat - That's a very fine tribute to your friend and thanks for bringing his story here. Sorry to hear about the loss of him. Love may be like the smoke, but it has survived him in your remembrance. I tip my hat to the cowboy in you both. Yes, and the cowboy in Leonard, Travelin' Light.

That line, say a prayer for the cowboy always struck me, too, as being dense with meaning. Cheers.
Top

Thanks Diane,
it is good to hear from you...and strangely enough it is nearly Christmas again...time flies, as they say.
I'm not sure how or when I came by that line of Leonard's, "Say a prayer for the Cowboy", probably on the forum, but not knowing the song, at all, to my knowledge, it surprises me that it entered my mind at this time...and Leonard seems to have a line for all situations, doesn't he

...but there the line was...and how beautiful the song...and the other interpretations by the "Cowgirls", Jennifer Warnes and Emmylou Harris, linked below.
https://www.google.com.au/search?q=say+ ... e&ie=UTF-8
To be honest, I think the girls do an even better job of singing it than Leonard!!! They are all beautiful but I think, today, I like Jennifer's slow haunting version the most...and it is from the woman's perspective; and the soul is sooo woman...

Thanks to you and of course. thanks to Leonard for "being there".

Always nice to see you Mat. 'I have measured out my life with coffee spoons', and Christmases, and shall do I imagine, until the eternal Footman snickers.

Yes, lovely female-singer versions! I think it was Laurie, who used to post here a lot in the 'old days', who first had me hear the Emmylou Harris version of Ballad, and I'd say that's my second fave, after Mr C's own.

I don't know how that song has passed you by for so long:-O... Leonard based it on the twelfth-century Zen picture series, Ten Bulls or Ten Ox-Herding Pictures, a sequential illustration of "stages" of spiritual illumination. 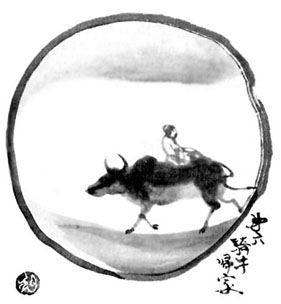 say a prayer for the cowboy...
Top

Poignancy and memory everywhere in this thread. My heart is with you in your loss of your dear friend, Mat. He was still so very young. Did he ever ride with you in your old, dusty pick-up truck? It's good to see you, even though you are led in by sadness. How are you doing in other areas of your life?

It's good to see you, too, Diane. Do you collect coffee spoons, or is that just a way of referencing activity?
Now, I'll go try to listen to the different renderings of this song. Been having trouble with You Tube. After that, sleep.

I've listened.now to Leonard's and to one of each of the women's. They are all wrenching.
"Be yourself. Everyone else is already taken."
~ Oscar Wilde
Top

Hi Lizzy! Long time no see, hope you are well. Merry Christmas to you x.
Top

Don't we all harbour the Grim Reaper at the very core of our body?
Isn't it he, the skeleton, who helps us keep upright?
Isn't death the nothing we keep coming from?
Isn't anybody "who loves changing from nothing to one" merely lost in some helpless wishful thinking — unless there's someone else who has a prayer "more intimate" (pronounced: intimayt) for us?

We can "kill the flame", but afterwards we are in need of "a shadowy guest [who] kindles a light for the lost", aren't we?
("When I left they were sleeping…")

"And she's there where the light and the darkness divide"
(ever wondered where that is, right here in our ordinary everyday world?)
"and you know that she's half crazy" — "but now we're borderline"
or, as Rilke has it, "And now and then an all-white elephant"
in his gorgeous samsara poem "The Merry-go-round — Jardin du Luxembourg"
https://leonardcohenforum.com/viewtopic ... 30#p365737

Hi Diane, Lizzy and Jean...
Thanks for saying hello and connecting.
Lizzy, the "cowboy" did not have the joy of riding the red sand in my old blue ute; I did not know him then and I suppose he was off on his own adventures. We only connected in recent times and it was our bush experiences that aided the friendship, I suppose.
Ah well...life moves along...
Jean, as for kindling a light for the lost...I like San Juan de la Cruz' line..."...without light or guide, save that which burns in my heart..."
In the end it's just I am and Who AM....just the two of us and we'll still be traveling on...as the song goes

I'm on the road for Christmas..."traveling light".

Once a wise old man, on his deathbed, was asked who his teacher had been.
He replied that he had had many teachers, but that two of them were more important to him than the others.
(Now I've forgotten who the first of those two teachers was.)
"The second one", the old man said, "was a child, carrying a burning candle. As I wanted to pull his leg, I asked him where the flame came from. The child blew out the candle and asked: 'And where did it go?' "

Where could that light burn, if not in the heart?

That's pretty much what Ramesh Balsekar said to Leonard!

And now I can't help wondering what nonsense I have wasted pixels on, for 3584 posts. I hope that you can all just let it go by. By way of observation, you each have a beautiful(ly lit) heart. Good night;-)
Top
Post Reply
10 posts • Page 1 of 1

Return to “You Want It Darker”