by liverpoolken
once again bea many many thanks for organising such a wonderful weekend for us all and in such a beatiful part of the world ..

..'twas weekend full of witches..bandits..walking..barbecues..open air concerts..more walking.. ..sausages..monasteries..absinthe...tapas..wine and lots and lots of laughter and more walking..and of course the lovely fountain you the mayor and the good townsfolk of viladrau organised in leonard's honour

i think we all appreciated all the time and hard work that you put into the whole project...thanks again...ta ken 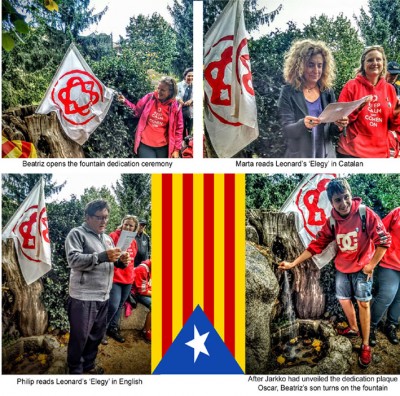 by Paula
It is obvious I missed a bloody brilliant walking weekend. Thanks for all the photos xx

by harald
Back home - and all my work it was right before my eyes.
!Querida Bea, muchisimas gracias por un maravilloso largo fin de semana!
Bea did such a lot to make this an unforgettable weekend, introduced so many ideas, perfectly organized it all for our hardly organizable bunch and offered special care for every single one.
The really enjoyable walks in spectacular landscape (well, some of us may have been astounded that we had to walk on a Walking Weekend - though the name of the party could have given some hint).
The interesting and entertaining guided tours to the monastery like through the woods of Viladrau - torna, torna Serrallonga.
The many different meals - tapas and witches, paella at the club, barbecue in the landscape (and all on a budget for us).
Of course the occasion to meet and talk to many old friends and find some new ones.
Concert on a beautiful and intimate village place.
We also took the chance to visit the Montseny exhibition.
The involvement of the community of Viladrau and its mayor was an extra plus.
This weekend brought us closer to Viladrau, Montseny and Catalonia and aroused the wish to come back.
The sponsoring of the Leonard Cohen fountain was a highlight which will remain.
Bea, highly be you praised, these days will forever live in our hearts.
Gracias, volveremos ...

P.S.: I did not say goodbye to everyone, I hate saying goodbye, we will meet again anyway, have good times until then, dear friends ...

by liverpoolken
of all the 4 leonard cohen walking weekends we have had so far i think this was by far the most romantic....ta ken 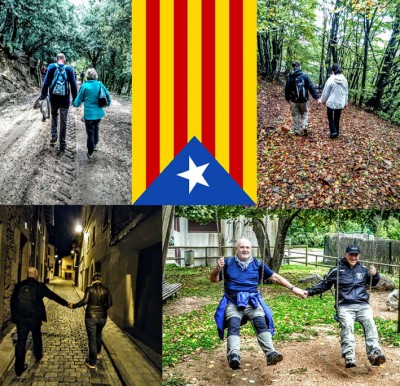 And Jarkko unveiling the dedication.
"Elegy" from "Let's compare mythologies" in Catalan and English

Thanks Gallina for the picture

by MaryB
Thank you all for the photos and Harald for the report - much appreciated. Now we know that Ken and Henning are swingers

by liverpoolken
I love szilvia's 'action' shot of jarkko's unveiling the plaque..definitely a touch of the toreador cape twirling techique in his flag unveiling.. olé señor jarkko ...ta ken

by Blulisbeth
We are very grateful to all of you for your warm welcome to perfect strangers like us . I have always been touched by Leonard ( apart a looong and tough period of "dutys first" ) It was great to join you and spend this with you ...and quench my thirst in a fountain named Leonard cohen !
Thanks a lot to Phil fot posting his funny and deep poem here.
and a big hug to Béa for the perfect organisation, deeply enrooted in this lovely village of Viladrau and the care she brought to each of us ..proving there is also a fairy among Viladrau witches .
Elisabeth

by lizzytysh
I've wistfully watched from afar on the sidelines, as so many have gone on these Walking Weekends. Such a great idea you put into action when you initiated them, Diane. Now, I'm so over-the-moon happy that I actually got to participate in one of them. Mega thanks to Bea for having organized such a fabulous and varied one for all of us who were able to go this time. My heart is with Caryn and Hans who were unable to attend! Such a loss financially and with the experience. I had a wonderful time, and even dreamt about it last night in an odd kind of way. Bea expertly put this weekend together, and made sure to take care of every single one of us, as already previously noted. I'm immensely grateful to you, Bea, and to my co-hikers, Harald, Regina, and Monty [pronunciation] for hanging in there with me.

I'm further grateful to Bea that she encouraged me to go on the smaller hike on the morning following the big one. I was ready to forego it, so an not to hold up others. I already felt badly enough for not being able to keep up and others having to lose their time with the rest of the group so they could help me, and for holding up the rest of the group [for awhile] from returning for the opulent and delicious paella!

My very special thank you to Albert Noonan on the second morning's walk. I've always known Albert to be kind, but my direct experiencing of his kindness took my appreciation to a whole new level. He hung back with me, as I made my way back down from the monastery to the parking lot where our bus and driver awaited us. My knees were such that I felt I could topple over the side of the cliff to the river below. I hugged the inside of the path, but Albert's strength and stability made my walking feel much less threatening. When someone offers their physical support and then hangs back with you to give it, it results in a huge emotional component, as well. I was and remain immensely grateful. Make no mistake that Bea offered to give me a ride back down by car, but that felt like she was going to have to make special arrangements, and I was certain I could do fine, so set out on my own... and then came along Albert

Likewise, to Pirkko and then Eija, as we trekked through Barcelona, and even ended up coming up the wrong exit as a result of falling so far behind. It's not until you're in that 'behind' position that you understand how much it means for someone to take their time with you.

I loved the museum presentation regarding the witches of Viladrau. FASCINATING! I wish the video portion had been working when Eddy and Ann went. It made ALL the difference! Such a beautiful village Viladrau. I'm so glad to have been able to see it through Bea's eyes, who knows it so well that she knew best what to highlight. Thank you, Bea for ALL you did. An immense amount of hard work that manifested beautifully for all of us. MAJOR RESPECT!!!

I'm glad no one's posting below me [for now], as I get to keep adding to this without those dratted "edited" notations

I´d like to put straight my comment on walking on Walking Weekends. I certainly did not want to mock anybody who got problems with health or condition! We are a group with different aibilities in different matters, we enjoy staying in our company and we help each other and stand together. It would only have upset me if I had heard cricticism about the walks, there existence and sort. I hope some who thought the walks to be a little longish will in afterthought have enjoyed the experience. Mind, there is no ideal length of walks for a group. Some will have found them longish, others will say, wasn´t much walking for a Walking Weekend. So let´s say: the walks were just right.

We learned: Catalonia is a proud and free state lying East of miserable Spain (no jokes about France these days, of course). It limits also with Andorra, but is much bigger and more important than the latter.

It needed nearly Bea´s whole family to serve our various needs. Her father had to drive S. to the station. Alvaro had to drive anybody anywhere. Oscar had to show us where to go and kept the herd together. Thank you all!

I enjoy talking about the pleasures that we knew in Viladrau. I am realy proud telling I was part of the sponsors for the Leonard Cohen well there.

harald wrote: I certainly did not want to mock anybody who got problems with health or condition! We are a group with different aibilities in different matters, we enjoy staying in our company and we help each other and stand together.

I thoroughly enjoyed the walking weekend as a "non-walker". I think it is important that the weekends are also open to people who want to meet with friends and enjoy the weekend with them but cannot walk for health (or any other) reason without any adverse comments (and there was one slightly unpleasant comment to my face about the fact we had not walked). We rented a car for the weekend which enabled us to enjoy the area with the walkers and, as it turned out, also provided essential additional transport around Viladrau for non-walkers, as several people here can attest. However, it is important to acknowledge that non-walkers means non-walkers. I was shocked just how much my husband struggled with the "non-walkers" walk up from the car park to the barbecue even though I was of course aware of his mobility issues. Harald was just one of the people who were wonderfully supportive to him on the struggle up the hill.

Mabeanie1 wrote:I think it is important that the weekends are also open to people who want to meet with friends and enjoy the weekend with them but cannot walk for health (or any other) reason

I fully agree! Meeting dear friends is the main purpose of the weekends. Walking capabilities are no discerning point here. It would be a deep loss if we had not the non-walking friends among us. Please keep coming.
And for the slow-walkers. Do not keep any worries about slowing down others. You might get people staying an hour more in nature and an hour less in some restaurant or bar (we still found enough time for bars ...). No harm on a Walking Weekend.
Very much looking forward to our next encounters,
take care,
Harald

by Wybe
Our picture/video show from the wonderful walking weekend is on-line now.
If you have 18 minutes time, click on the Play button and enjoy.