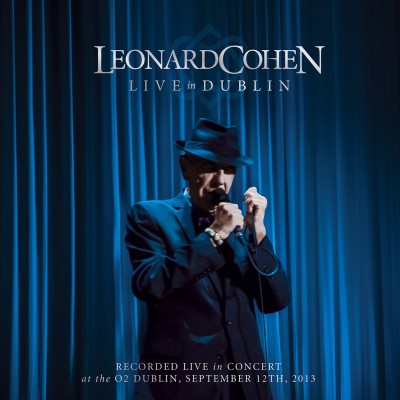 Here is the official press release. Also at http://www.leonardcohenfiles.com/livedublin.pdf

The first (and only) release of a complete Leonard Cohen concert to be shot in high definition, Live In Dublin will be available in 3CD/DVD, 3CD/Blu-ray and digital configurations.

This state-of-the-art audio-visual HD presentation of a full-length concert from the Old Ideas World Tour delivers this artist's repertoire (backed by a band recognized by critics as his best ever) with the intimacy, intensity and poetic beauty that have become hallmarks of a Leonard Cohen concert. Live In Dublin recreates the deep emotional connection that audiences felt so powerfully and critics praised universally with five-star reviews during Cohen's most recent tour.

Live In Dublin is the singer-songwriter-novelist-performer's second new release this year. On September 23, 2014, two days after Cohen's 80th birthday, Columbia Records released Popular Problems, the Canadian bard's 13th studio album of new material since his 1967 debut, Songs of Leonard Cohen. An international success, Popular Problems reached #1 on the iTunes chart in 31 countries and entered the Billboard 200 at #15 while debuting at #1 on the Austrian, Canadian, Dutch, New Zealand and Swiss album charts; the new album also debuted Top 5 in Belgium (#2), Finland (#2), Germany (#4), Italy (#5) and Sweden (#5)

Encore
So Long, Marianne
Going Home
First We Take Manhattan
Famous Blue Raincoat
If It Be Your Will (Webb Sisters)
Closing Time
I Tried to Leave You
Save the Last Dance for Me

In celebration of his milestone 80th birthday (September 21), Cohen's endless poetic energy and enduring legacy are honored with a new artist page on iTunes (http://www.itunes.com/leonardcohen), which features Popular Problems and includes all 12 prior studio albums Mastered For iTunes.

Leonard Cohen is a master songwriter, musician, poet, novelist and visual artist whose stunning body of original work has touched the lives of millions with a career spanning six decades.

His explorations of spiritual, interpersonal, romantic and political themes have impacted countless contemporary recording artists and writers. He has sold over 23 million albums, worldwide and published 12 books, the most recent of which was 2006's 'Book of Longing', a collection of poetry, prose and drawings, which reached #1 on the Top 10 Hardcover Fiction Books in Canada.

Cohen's influence on musical and theatrical artists the world over is inestimable. In fact, when Cohen was inducted into the Rock & Roll Hall Of Fame in March 2008, the revered Lou Reed singled out Leonard as one of the "highest and most influential echelon of songwriters." Cohen's songbook has been covered by hundreds of recording artists including Jeff Buckley, Bob Dylan, Nina Simone, Johnny Cash, Lou Reed, Tori Amos, Nick Cave, Joan Baez, Harry Belafonte, Rufus Wainwright and the Civil Wars. Tribute albums have been released in Cohen's honor in France, Norway, Canada, Spain, Swedish, Czech Republic, South Africa and the United States. In 2008 Cohen's "Hallelujah" became the fastest-selling digital single in European history when three separate versions of the song appeared simultaneously on the UK singles chart - Cohen's own original recording, a version from Jeff Buckley and another from X Factor winner Alexandra Burke. Additionally, Leonard's songs have been frequently selected to illustrate the emotion of motion pictures and television programs and have been heard in Watchmen, The Passion of The Christ, Natural Born Killers, The Wonder Boys, Pump Up The Volume, Secretary, The West Wing, The O.C. and many others.

Leonard Cohen has been honored as a Grammy Lifetime Achievement Award Recipient (2010), inducted into the Rock & Roll Hall Of Fame (2008), the Canadian Music Hall Of Fame (2006), the Canadian Songwriters Hall of Fame (2006) and the Songwriters Hall Of Fame (2010). He has received the prestigious Principe de Asturias Prize – the highest literary award in Spain (Spain, 2011) as well as the Glenn Gould Prize, awarded to an individual for a unique lifetime contribution that has enriched the human condition through the arts (Canada, 2011). The Canadian native has earned his country's highest civilian honors - Officer of the Order of Canada (1991), Companion to the Order of Canada (2003), Grand Officer of the National Order of Quebec (2008).

Cohen's return to live performance in 2008 was met with extraordinary and unanimous accolades as he performed around the world from through 2013. Cohen's mesmerizing recent performances, deemed "a spiritual experience" by all accounts, totaled 470 shows in 31 countries attended by four million fans.

Wonderful news! Thank you Jarkko! That will make a nice Christmas present

Excellent news. Really excited since I had front row for this show. Was a great night. The guy next to me on the night, told me that it was being recorded for a DVD. Thought he was messing.
Top

THANK YOU LEONARD - THANK YOU JARKKO
for the very exciting/wonderfull news - the best early x-mas gift ever !!!

A nice surprise that there will be bonus tracks from the excellent Spring 2013 Canadian maritime concerts.
I was at the Saint John , NB concert and there seemed to be something special about that performance , even with the high bar set by ALL of Leonard's concerts
A personal disappointment that 'Night comes on' isn't included.The beautiful performance from the 11th would have been welcome as another bonus track
Last edited by cohenadmirer on Tue Oct 14, 2014 3:59 pm, edited 5 times in total.
Leonard's work resonates
Brighton 1979; Dublin , Manchester june 2008; glasgow, manchester Nov 2008; Liverpool july 2009 ; Barcelona Sept 2009 ;marseille, lille september2010: Ghent August 2012;Barcelona October 2012;Montreal x2 November 2012: 2013; Saint John NB April 2013; Brussels June 2013;Manchester August 2013; Leeds , Birmingham September 2013; Amsterdam September 2013
Top

Jarkko, this may be a rhetorical question, but perhaps you have any advice -

To whom should we write to help Sony and to make its LC press-releases more accurate and complete?


debuting at #1 on the Austrian, Canadian, Dutch, New Zealand and Swiss album charts

Several charts are missed, including countries with a vast music market - why?

Having an official release of not only a concert I was at but what is so far my final LC concert is something I am really looking forward to. Great to see Show Me The Place, Anyhow and Different Sides will be on the DVD too. I've said it before and I'll say again: Leonard is the gift that keeps on giving.
2009 Dublin 2010 Lissadell Katowice LV x2 2012 Ghent x2 Dublin x4 Montreal x2 Toronto x2 2013 New York x2 Brussels Dublin x2

Cohen's return to live performance in 2008 was met with extraordinary and unanimous accolades as he performed around the world from through 2013. Cohen's mesmerizing recent performances, deemed "a spiritual experience" by all accounts, totaled 470 shows in 31 countries attended by four million fans.

It looks more like 372 shows, not 470 (the number may be inaccurate, but not that roughly).
Roman aka Hermitage Prisoner
Top

You may be taking press release bumph far too seriously Roman!!

with the Sublime Sisters of Mercy
Top

Very excited about this release. However, was hoping for Coming Back To You and I Can't Forget as bonus tracks, two of my personal favourite moments of the tour. I wonder if there will be a further complimentary release in the style of Songs From The Road to mop up the missing tracks from the tour? Roll on 1st December.