MUSIC Leonard Cohen on turning 80 and his new album

Releasing a new album near his 80th birthday, Leonard Cohen cheekily addresses his age in the very first song, intoning, “It’s not because I’m old ... I always liked it slow.”

The legendary poet and songwriter nonetheless glides confidently through a gamut of themes and styles on the album Popular Problems, ruminating in his husky and undiminished voice on war, loss and his own spiritual odyssey.

The Canadian-born talent turns 80 on Sunday, two days before the release of Popular Problems. But Cohen said that the timing of his 13th studio album — his first since 2012 that comes decades after classic songs such as Hallelujah and So Long, Marianne — was coincidental.

On the latest album, Cohen invokes Hurricane Katrina in Samson in New Orleans, lamenting the destruction of jazz’s birthplace: “You said you loved her secrets / And her freedoms hid away / She was better than America / That’s what I heard you say.”

In one of the more striking musical passages, Cohen brings in plaintive Arabic snippets of a female singer in Nevermind, in which he bemoans the anonymity of war victims with verses such as, “The story’s told with facts and lies / I had a name / But never mind.”

Cohen, previewing the album at a New York nightclub, said the woman’s voice represented “the oppressed” who are absent from public discourse.

“Generally speaking, nothing anybody says in public anymore nourishes or resonates with any authentic sense that you have about things,” Cohen explained.

“So, same way about Syria or the general catastrophe that confronts us now. So that voice comes out of that unrepresented majority of people,” he said.

Cohen, who declined to speak further on world affairs, has long mourned bloodshed in songs such as the Vietnam War-era Story of Isaac. He has pleaded for peace in the Middle East but has also defied calls to boycott Israel.

Enjoying the return to music

Elsewhere on the new album, Cohen alludes to war and genocide — and, incongruously, “all my bad reviews” — and says of them with dark irony, “Lord, it’s almost like the blues.”

Cohen, who is Jewish as well as an ordained Zen Buddhist monk, delves into the Biblical story of Exodus on the Gospel-backed Born in Chains.

The album even veers into bluegrass on Did I Ever Love You, providing light interludes in a severe song that features the verse, “The lemon trees blossom / The almond trees wither / Was I ever someone who could love you forever?”

Cohen co-wrote most songs on Popular Problems with Patrick Leonard, who is best known for producing smash hit albums for Madonna including True Blue and Like a Prayer.

While his creative energies remain intense, Cohen in the past has not denied that his motivation for recording new albums and a series of global tours since 2008 has been partly financial.

In 2004, he accused his longtime manager of stealing $5 million (Dh18.3 million) from him when he was living in seclusion at a California monastery, leaving him with little in his retirement nest.

But Cohen, who struggled for years with depression, said that he has benefited from the itinerant life of touring.

“Getting back on the road has improved my mood considerably because I was never very good at civilian life,” he said at the New York club.

Asked about his plans as an octogenarian, Cohen said, perhaps tongue-in-cheek, that he had long intended to resume smoking at age 80, divulging his craving for a strong Greek or Turkish cigarette.

“I’m looking forward to that first smoke,” he said.

“I’ve been thinking about it for about 30 years. It’s one of the few consistent strains of thought that I’ve been able to locate.”

(I couldn't find this on line) 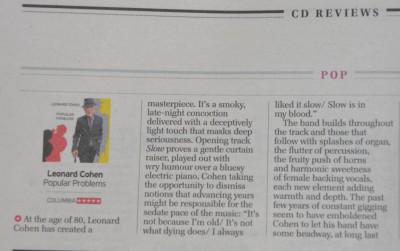 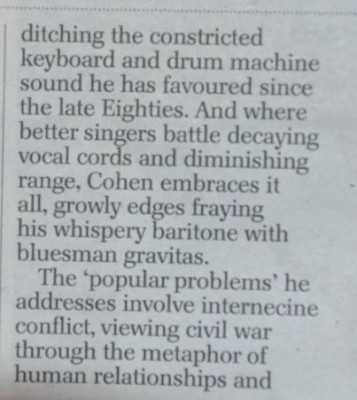 
“Slow is in my blood,” Leonard Cohen sings on his new album. Really? Slow certainly used to be in his blood, but he seems to have picked up the pace recently. It’s only two years since his last album, and he claims that he and his co-writer, Patrick Leonard, have another one half-finished already. (The songwriting credit is, presumably, “All songs by Leonard Cohen, or Leonard/Cohen”.) This is excellent news, because the mature Cohen remains a class act — much like the younger version, but with more female backup vocals and with the sly grin a little more obvious, as on Almost Like the Blues. “There’s torture and there’s killing,” he sings, “and there’s all my bad reviews.”

I'm really surprised at all the negative reviews on Amazon UK.

jerry wrote:I'm really surprised at all the negative reviews on Amazon UK.

I'm going to get 'pelters' for this on here but I don't like the production at all. It's lazy.

Why doesn't Leonard get his 'touring band' into the studio with him? All of these songs/poems would sound so much better.
Robert
To live outside the law you must be honest
Top

Zimmy66 wrote:I'm going to get 'pelters' for this on here but I don't like the production at all. It's lazy.

Why doesn't Leonard get his 'touring band' into the studio with him? All of these songs/poems would sound so much better.
Robert

I guess it's gotten to the point for me where I focus so much on the words and voice that the cheezy electronic drone doesn't bother me so much anymore. The words come from deep within. The music should sound organic to match the words. It should be played by human beings. Instead much of the music lately sounds electronic and computer generated and it doesn't do justice to the words at all.
Poetry is just the evidence of life. If your life is burning well, poetry is just the ash.
Leonard Cohen
Top

I'd definitely prefer the full band but can live with the way it is on this album. Sounds a lot more organic than many of his other synth based albums.
Top

Have Uncut or Mojo reviewed the album yet?
Top

Links are from metacritic.

From: The New York Times 70. Don't know where did they get that information. 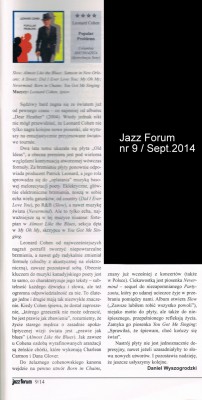