"Popular Problems" - the next LC album

I'm not really understanding the criticisms for the production on this one.

Samson, Did I Ever Love You, A Street, You've Got Me Singing all have live band arrangements. My Oh My is also primarily live instruments played by Pat Leonard, except for the horns. Born in Chains also has a live feel to it.The only track that really uses synthesized sounds is Almost Like The Blues, and the horns on Slow.

There is more organic music on this record, than there has been on any of LC's albums since the Future.
Top

Got my copy today I love it

The Australian release date was supposed to be 26th of September, but I've just received an email to say it's in the post.

Hi, thanks for a great album Leonard. All songs absolutely great but My Oh My a special.
2012 Dublin Kilmainham
Top

Popular Problems is featured as the CD of the day in the Adelaide Advertiser (News Ltd/Murdoch publication).

Leonard Cohen gives you his second album in two years. He again works with Madonna's Like a Prayer - era cohort Patrick Leonard and it sounds thrillingly just as you'd hope. If he ever tours again, Almost Like The Blues will slip in perfectly among his languid laments, while you get a grizzled octogenarian whispering deep in your ear on Samson in New Orleans. The gruff Did I Ever Love You makes Tom Waits sound chipper. On Nevermind, Cohen gets unexpectedly funky complete with discreet beats and world music chants. And on Slow he documents romance for the older gent: "It's not because I'm old, it's not what dying does, I always liked it slow, slow is in my blood."
Too much Leonard Cohen is never enough.
London 1972, Adelaide 1980, 1985, 2009
Sydney 2010; Adelaide 2010
Sydney 2013 X2; Melbourne 2013; Adelaide 2013
Top

I have just bought my copy of Popular Problems from my local record store – Sanity. They had a “buy 2 for $40” deal; PP was originally priced on the shelf at approx $24.99. So even though I already have most of their songs I persuaded myself to add the Eagles 1972 to 1999 4 disc CD. While looking through the other LC CD’s I saw Old Ideas for approx $14.

I had previously been listening to a HQ downloaded version of PP since 20th August. I have just finished listening to the official CD I purchased and one thing I have to say is that even though the official one is of course better, the quality of sound between either version is really not that noticeably different to the average ear. I can see why some people wouldn't bother buying the official album. But for me, I like to have the (B4)real thing including the booklet in my hands

Anyhow, here’s a couple of pics of my purchase this morning. 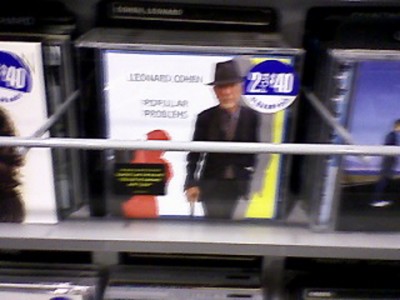 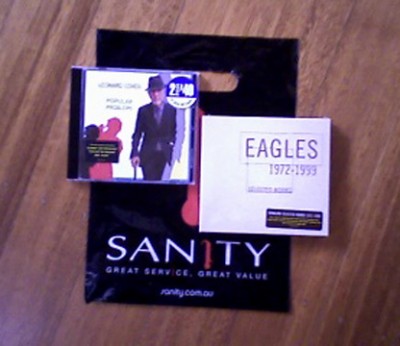 Bev! Bev!. There is nothing like the real thing. We could all have downloaded the album, but there is so much more satisfaction just having the ' real thing' in your hands

It is a wonderful collection of songs.
I am hoping you are enjoying it as much as I am.

Ah, Marie, these days most people download everything, but as you can see from above and below, I'm still a tactile person at heart!

B4real wrote:But for me, I like to have the (B4)real thing including the booklet in my hands

Yes, I do like it and am enjoying it. It's a good album and in some cases rather adventurous. At my very first listening my favourite songs are still the same as now - I'm guessing you know which three they are

At this stage, I prefer some of his previous albums but as is always the case with Leonard's songs, one has to take some time to try and comprehend all he has to say and then that understanding changes to another point of view.....some things are never really completely defined .....such is the nature of those wonderful words! Even the ones that are straight in your face at the beginning can have a meaning more elusive than you take in at first glance. As you know, even loving the violin as I do, it was always Leonard's words alone that I connected with.

....btw - I wish now I had bought a violin CD instead of the Eagles!
It doesn't have to be perfect, it just has to B4real ~ me
Attitude is a self-fulfilling prophecy ~ me ...... The magic of art is the truth of its lies ~ me ...... Only left-handers are in their right mind!
Top

I recently bought LC's "Popular Problems" and I want to say that I am just knocked out by this album. IMHO it is just magnificent. It's probably too soon to tell but I'm coming to the opinion that it just may be my very favorite of all his albums.

The reason I say it's probably too soon to tell is because although I'm certain that I feel that way about the musical properties, it always takes me much longer to come to an understanding of his lyrics. They are so profound.

The sound is nothing like any of his previous albums that I've heard. I'm afraid that before acquiring my recent resurgence of interest in his music, my collection was limited to his first four albums.

The sound of this new album is so powerful and his voice seems older but no less dynamic. I love this new album. I think the arrangements are much better than any others I've heard before. I love the way that new instruments have been added. This is music that I would call "Music for Any and All Time". I love to listen to it when I wake up in the morning, when I'm falling asleep at night, whenever I want to engage in some concentrated listening and any other time at all.

I recently found a link to someone who attempted to rank all his albums. I found some of the information there quite interesting. For example, I had never before known that Phil Spector produced (or engineered) one of LC's albums (Death of a Ladies Man) which was ranked very last in the list. I just sampled some of the songs on that album and it sure doesn't sound like any LC music I've ever heard before. I quickly took a strong dislike to the music from that album.

I have more that I'd like to say about Phil Spector and the LC album he produced. But that will have to wait for another post.

In the meantime, I'd love to hear your thoughts about "Personal Problems" and also about his other new album, "Old Ideas". I haven't bought Old Ideas yet. But I will buy it within the next few days and I'd like to hear your opinions about either or both of these albums.

I discovered this thread just minutes before I was about to start a new thread. Very silly. I should have known someone else would have already started a thread about this album. I will now read the posts in this thread to learn your opinions. If anyone would like to post more opinions in this thread, I sure would love to read them too.
Last edited by Alishibaz on Mon Jul 04, 2016 3:19 pm, edited 1 time in total.
Top

Oh I am sure you wouldn't, some of the people on here will have you talking for hours about their personal problems

I guess it all started for me sometime around Christmas 1967 and now, goodness me, it's.........2018 and over fifty years later.
No one ever listens to me. I might as well be a Leonard Cohen record.
Neil from The Young Ones
Top
Post Reply
177 posts