There will be a tribute concert on February 6th 2020 at the Memo Music Hall in Melbourne. 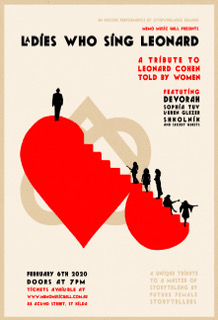 Thanks, this looks promising, must get along to it.

Last night Junk and I experienced this fabulous concert featuring six talented vocalists and a few other instrumentalists performing a worthy selection of Leonard’s songs, as follows: Hey That’s No Way to Say Goodbye; Bird on a Wire; Tower of Song; Dance Me to the End of Love; Suzanne; Famous Blue Raincoat; Everybody Knows; I’m Your Man; Tonight Will Be Fine; Chelsea Hotel; The Goal; Who by Fire; You Want It Darker; Hallelujah; Passing Through; So Long Marianne.

Each of the songs was arranged and interpreted in an interesting or compelling way, with the women’s quite remarkable and unique individual voices offering a nice vocal variety across the spectrum. I also loved the exuberance, vitality and camaraderie of this group of relatively young performers, who remained on the stage together throughout. They performed with obvious conviction too, though there were the moments of laughter and irreverence. Anyway, the whole show was just so stirring, transcendent and joyous.

One of the highlights of the whole night for me was Anita Lester (aka ‘Devorah’) doing You Want It Darker, which was spellbinding. Those of you who may not have seen her in action before, can do so via the Facebook link below (originally posted by Allan Showalter), which includes her early version of this song recorded a little before Leonard died, one which she endeavored to send to Leonard, along with a heart-felt letter of homage to him as her mentor, in which she recounts how she became a fan of his after her father’s death when she was just 10 years of age.


Another captivating performance was I’m Your Man beautifully rendered in Yiddish.

The grand finale song of this awesome show was So Long Marianne, with the main six vocalists doing a verse each and the whole group doing the loud rousing chorus together after each verse… I have to say this is possibly the most enjoyable cover performance of the song I’ve ever heard.

Even though Leonard was only present in spirit, it was also a nice association that one of the performers was a Cohen, Gabriella Cohen, a recognized performer in her own right.

Below are links to a couple more YouTube recordings from earlier performances by the group.


A joke from the night to finish with: this group of young women looked magnificent, all in white, with one of them commenting they might appear to be ‘brides of Leonard’, or perhaps ‘whores of Leonard’. 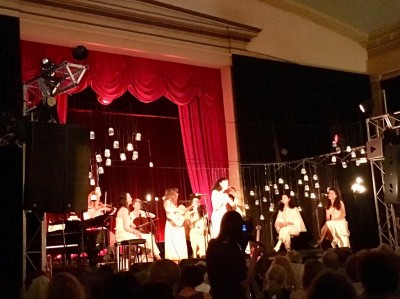