Sarah Polley, a Canadian actress/director, is currently filming a romantic comedy starring Michelle Williams, Sarah Silverman and Seth Rogen in Toronto. The IMDb log-line: "A funny, bittersweet and heart-wrenching story about a woman struggling to choose between two different types of love." No indication yet, who will be doing all the music, but I bet we can guess where they got the title from.
Jazz
Top

And - yes - we know where she got the title.

I hope that is where she gets the music as well!
Top

Thanks for the update sturgess 66- don't know how I missed your topic in April - I'm attending the Toronto International Film Festival next month -and I'll try to get some additional info on the film then.
Jazz
Top 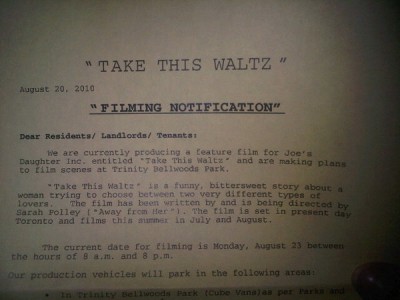 Sarah Polley's film, Away from Her, was wonderful. I look forward to this new film.
http://theplaylist.blogspot.com/2010/01 ... g-for.html
this link is to the article that describes the script.
Top

Collider has compiled the latest battery of material from Sarah Polley‘s forthcoming “Take This Waltz.” Starring Michelle Williams and Seth Rogen, Polley’s film follows Margot, a 28-year-old woman who’s been married to her husband Leo (Rogen) for five years. She meets a man named Seth on a business trip who turns out to live across the street from the couple and the two begin an awkward flirtation, which soon threatens to blossom into something more.

Comedienne Sarah Silverman also stars as Rogen’s sister in the feature, though is curiously absent in any of the marketing collateral. We reviewed the script earlier this year and found it to be a charming and initially funny, honest and unflinching exploration of people in their late 20s; much the same thing “Away From Her” was for people in their 60s. No word on a potential release yet, though a Sundance premiere could be on the cards considering the current timeframe and the fact her debut directorial feature played there in 2007.

In the director’s notes to the film, it’s mentioned that the “soundtrack will be alive and pervasive and feature legendary songs by Leonard Cohen as well as the contemporary music of many emerging independent bands” which thrills us to no end. Cohen providing the backdrop to the potential romantic and domestic strife seems perfectly fitting. And of course, “Talk This Waltz” just happens to also be a song by Cohen, so the pairing makes perfect sense. You can check out the official synopsis and a number of stills after the jump:


When Margot, 28, meets Daniel, their chemistry is intense and immediate. But Margot suppresses her sudden attraction: she is happily married to Lou, a celebrated cookbook writer.

When Margot learns that Daniel lives across the street from them, the certainty about her domestic life shatters. She and Daniel steal moments throughout the steaming Toronto summer, their eroticism heightened by their restraint. Margot finally gives in to desire and in doing so, discovers some unsettling truths about herself. Swelteringly hot, bright and colorful like a bowl of fruit, Take This Waltz leads us, laughing, through the familiar but uncharted question of what long-term relationships do to love, sex, and our images of ourselves.

Was it Inglourious Basterds? Million Dollar Baby? Or, maybe Titanic?

Can't think of any film that has knocked your socks off in the past year or two, or more, right? That's because there hasn't been any.

The Hollywood machine readily admits the only thing dramatic about movies this winter -- as we're pounded with silly remakes and banal sequels -- is that the amount of tickets sold has plummeted 22% over last year. The Hollywood executives agree: "So far there is just nothing terribly compelling about what we're delivering as an industry," said Michael Lynton, CEO of Sony Pictures.

But before you lose all faith, know there's at least one picture waiting in the wings that may have some key ingredients that go into clever filmmaking. Naturally, it's a movie being made by Canadians.

Take This Waltz, written and directed by the awesome Sarah Polley, is expected to debut in September at the Toronto Film Festival. While the soundtrack is still being laid in Toronto at Tatersall Sound & Picture, the rest of the editing has been done and word is it's a refreshing winner.

First, Take This Waltz has a title that has actual meaning and substance -- it's based on Leonard Cohen's song with the haunting refrain of "ay, ay, ay, ay, take this waltz, take this waltz..." This, in itself, is the first miracle of the film. Hollywood these days wouldn't dare put out a movie with an ethereal, doubleentendre title as it's considered unsafe for box-office receipts.

Then, it has an original storyline with real world

applications. A woman, Michelle Williams, struggles with infidelities because she gets bored after a couple of years with the same guy, even though the guy is great. This is the kind of thing that destroys relationships in real life and examination of this problem is a good thing. Good movies, let's remember, are supposed to be like a good novel -- they're supposed to get you thinking and talking.

Our beloved Seth Rogen plays the guy being cheated on and word is Rogen is back on his game -- as a fine actor you can't take your eyes off -- in this movie.

Take This Waltz is the same movie comedian Sarah Silverman has been talking about getting naked in. She does, but it's not salacious.

The fact producers are taking their sweet time putting the finishing touches on Take This Waltz and massaging it for its fall debut is a promising indication they know what they have in their hands. And hopefully, it'll remind Hollywood of the simple thing that most people want out of movies -- a good story told well.

Now that is an excellent review!! And even more coverage of Leonard... awesome. Can't wait to see the film.

Thanks, Linda!
"Be yourself. Everyone else is already taken."
~ Oscar Wilde
Top

Admittedly, "Take This Waltz" had a big advantage at this festival. Polley is Canadian and the film was largely shot in Toronto, showing off the city's attractive inner neighborhoods, with their attached rowhouses, deep porches and vaguely funky vibe. Borrow a Leonard Cohen song for the title, and there's simply no way the movie was not going to be embraced by Canadian audiences.

Thanks, Judy, for offering to give us the scoop when you attend the TIFF.
I look forward to reading your report from Toronto, my hometown.

Check out http://www.redcarpetdiary.tv for all the Toronto Film Festival behind the scenes coverage!
Top