with the concert in Melbourne well under way, I think it is time to start up this thread. Melbourne's Rod Laver Arena is the venue for today's show. The arena is no stranger to LC, having hosted his concerts three times during the last world tour.

Dance me to the end of love
The future
Bird on a wire
Everybody knows
Who by fire
The darkness
Amen
Come healing
Lover, lover, lover
Anthem

by Marco F
I know he did The Partisan tonight, because I got a phonecall from Ania. 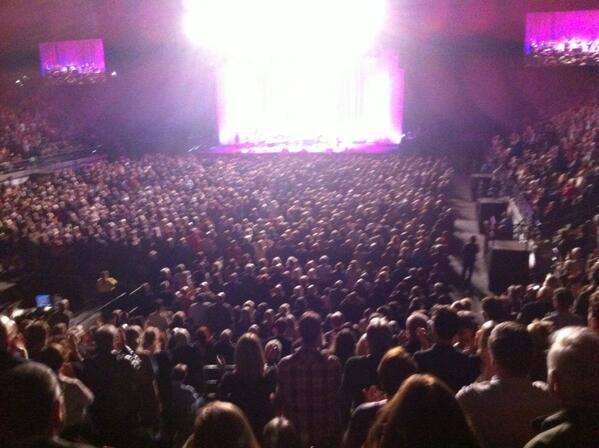 @SchweppsRocka - I saw Leonard Cohen perform "Hallelujah" live and it was pretty much the most perfect thing ever.

Leonard Cohen seems smaller this year. Maybe it's an optical illusion; his slight, mortal frame shrinking against his still unfeasibly expanding legend. But this time he actually seemed to disappear during A Thousand Kisses Deep.

As on his tours of 2009 and '10, this relatively recent song was offered as a recitation, almost unaccompanied, as we thousands held our breath in the dark.

Through closed eyelids, the poet's monumental words seem to find some kind of physical form. You know, like in the book of Genesis. The speaker was manifest in them. They became the rock-solid and eternal legacy of his absolutely pure, otherwise indefinable intention.
Advertisement

Hallelujah was next. That wasn't bad either.

Third time around in six years, tearful witnesses have pretty much run out of superlatives to describe Cohen's deft caress in concert. In truth, the usual opening gambit felt rather slight, as his large band made its tiny sound to allow every flinty syllable of The Future and Bird On A Wire due weight.

But sure enough, the words began to spin their own gravity with the sardonic bite of Everybody Knows, and the ethereal chorus of Sharon Robinson and Charley and Hattie Webb made pure transcendence of Come Healing. By Anthem, that familiar feeling of spiritual levitation was playing havoc with body chemistry.

Sometime co-writer Robinson stole Alexandra Leaving in the second half with a voice that fell like water from a cup, the silvery foil to Cohen's gravelly lurch from Tower of Song to Suzanne and I'm Your Man.

While he may be physically shrinking before our eyes, Going Home — one of four or five songs from his latest album — painted a picture big and graceful enough to swallow one man's life, the universe and everything whole.

by AlanM
The morning after the night before, and I'm still in the warm afterglow of an excellent concert.
Timing - Set 1: 8:11 to 9:19pm; Set 2 from 9:40 to 10:31, with the encores finishing at 11:14pm.
Compared to Sydney, "Waiting For The Miracle" and "In My Secret Life" were missing, and "I Tried To Leave You" was added.
Comparing my overall impressions between the 2 shows, even though we were 1 song down last night, I feel it was a more enjoyable experience.
The acoustics in Rod Laver Arena were much better than the Sydney Entertainment Centre. My personal opinion is that the difference was that there is carpet on the floor of the Melbourne venue, with just bare concrete in Sydney. That gave a "warmer" sound - really the only way I can describe it.
BIG difference was the leg room, a good 15 to 20 cm more in Melbourne = much more comfortable, as crossing and uncrossing legs didn't require contortions.
Melbourne fans weren't as slow getting into their seats, both before the show and after interval, and I guess Melbourne's curfew is earlier than Sydney's.
Also I have the impression that the Melbourne crowd was more enthusiastic than Sydney, I think there were more standing ovations last night. I also think that Leonard and UHTC felt more positive feedback from the audience as in many situations they were more animated than last Saturday.
The performances were excellent as usual, I certainly didn't get the impression that Leonard was shrinking, as reported above. Of course, as always, he was just singing to me, as were Sharon, Hattie and Charley, but then the magic of Leonard Cohen is that everybody feels the same thing.
Minimal (if any) changes to lyrics, last night.
Pre concert there was a meet-up that Andrew will report on. It was great to meet other fans and put faces to names.
Ratings: Sydney 9.5/10; Melbourne 9.9/10 (just in case it gets better as the tour proceeds).
I got 6 more videos last night, but I won't be home until late tomorrow to check and post them.

Dance me to the end of love
The future
Bird on a wire
Everybody knows
Who by fire
The darkness
Amen
Come healing
Lover, lover, lover
Anthem

by Boss
I can't remember the songs in order, I can't remember a lot of things but I do remember the sound - what an amazing sound. I don't think I've ever heard Leonard Cohen sound so clear - even on his earliest albums. The Webb Sisters were sublime - I liked how they danced in sync pretty much throughout, their voices soared to the stratosphere particularly in If It Be Your Will. Sharon's Alexandra sent shivers down my spine - my Mum loved every piece of it. The band was just bloody impeccable. The guitars, the violin, the beat - amazing. The whole show was so tight, the whole show was a smorgasbord of colour, even love. And I don't say 'love' lightly. To me it was like the songs were being sung directly to me. I guess thousands of others thought that too. I connected with The Future - I think at one point I even cried a little. Old Ideas stuff crystal clear and meaningful. The oldies reminded me of my old man. Only real glitch was when one joker in the crowd yelled out "Jesus!" right after the middle verse of Suzanne - it was very loud, it spoiled the moment. Last night was my second Leonard Cohen concert. The man is a gem, a bloody gem. If by any chance you read this, I just want to say, 'Thanks mate'.

by Tundra
We thought it was just fabulous! Loved every second. I saw Michael Dwyer's review in the Sydney Morning Herald this morning and was a little annoyed by it. It was a bit condescending, particularly his repeated references to Leonard Cohen's supposedly 'shrinking' frame and the suggestion the opening 'felt rather slight' - nonsense! It was an amazing concert and a night we will always remember.

by blonde madonna
Here are some of my thoughts on the night although I feel a little daunted by the task. I hope I can do it justice, it was such a great night, even the after concert walk along the Yarra back to Flinders Street to catch the tram seemed magical in its aftermath.

When he first came on the stage I was worried for him, I thought he looked tired. It is a punishing schedule touring the world with hardly a decent break for how many years?
The first two numbers seemed a bit lack lustre, but then 'Bird on a Wire' has never been a favourite of mine. I was fascinated by the animation he brought to 'Everybody Knows' with his gestures, I swear he crossed his heart when singing the 'sacred heart' line. When they moved on to the newer material everything started to pick up. 'Come Healing' was a highlight for me, the Webb sisters at their best. 'The Partisan' was unbelievably good, everyone was fantastic and Cohen did so much more on the guitar himself this time around, not just on this song. 'Lover, Lover, Lover' was another memorable performance, so much energy. When the audience cheered his organ playing for 'Tower of Song' his response was amusing and included some wry showing off, I wish I could remember it in more detail, he so genuinely and charmingly refuted it. 'Your joking, this isn't charity for the aged', something along those lines.

His smile seemed to get wider and wider as the night went on and he skipped and danced off the stage and literally ran back for the many encores He came back for three encores (I stand to be corrected, I wasn't taking notes) and I felt surprised and delighted each time. He so graciously thanked everyone, the audience, the musicians, the support staff. He gave so much, I am blown away and my 22yo daughter enjoyed it just as much, it was a real all ages event.

The only downside was that everyone seemed glued to their seats. I felt positively chained to my seat during 'First we take Manhattan' and 'Closing Time'. I looked around the arena and no one got up to dance. I'm pretty sure the last time I saw him here the audience stood for the encores.

Last but not least, Andrew deserves a big thanks for organising the get together before hand. Meeting fans from Amsterdam, Paris, Leopold and everywhere in between really added to the special experience.

I feel so fortunate and so glad that I still have The Hill concert to look forward to.

by blonde madonna
Btw, thank you Alan for your observations

and the comparison with Sydney.
Jim asked me about the sound and I really have nothing to compare it to, it was fine but I told him Rod Laver was all concrete, I didn't notice the carpet under my feet! Looking forward to your videos too.

by B4real
Finally managed to report here after last night’s concert. Had a wonderful time starting with putting faces to names of many forum friends (not all unfortunately) at the meet-up dinner which Andrew kindly organised. Good food and great company – perfect preparation for what was about to unfold.

Personally I found this Melbourne concert much better all-round than Sydney. My seat was the furthest back of all the concerts I am attending and I thought it would not be as enjoyable. How wrong was I! Perfect centre view from six rows back and the sound was so much better. Managed to record audio 99% of this concert but still some problems, sound still a bit low but without the distortion of Sydney.

And.... um, err .... there is another sound problem which really could (and should!) have been easily avoided. I thought I was ever so quietly mouthing (not singing) the words to some of the songs. In ‘If It Be Your Will’ there are now Three Webb sisters! - totally I forgot I was recording this! And as well as a few comments, I've said an enormous shout at the end of Closing Time of “NO, NO, NO.... Alan” to AlanM who was two rows away! – so embarrassing!!

Apart from the usual comments, here are some of the words Leonard spoke after Dance Me To The End Of Love:
“I hope that every one of you will hear exactly what we’re doing on stage, and if you don’t please let me know, please cry out my name!”.... and of course immediately there were calls obligingly replying to that irresistible invitation! He went on to say about the seats in front of him: “and I want to thank you down here for endangering your family and your finances”. (I couldn't hear those last few words properly).

Part of his dialogue in Tower Of Song:
“You must be kidding! Is this is some sort of charity for the elderly. I know that it was nothing! You think that’s all I can do though, don’t you!”

After Suzanne was finished a female voice shouted “we love you” and in the darkness on stage you could just make out Leonard tipping his hat in the direction of the voice. Always the gentleman

My photos seem to have taken on a life of their own. I don’t know if it is the camera or the operator at this stage, but for what they are worth here’s an assorted few. 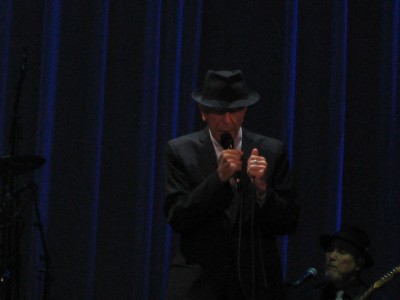 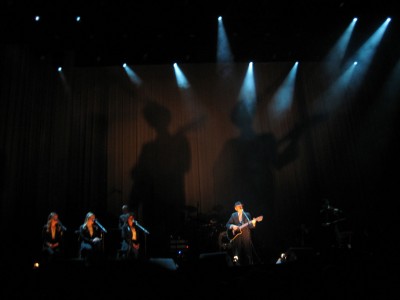 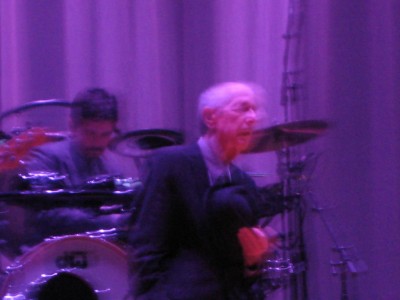 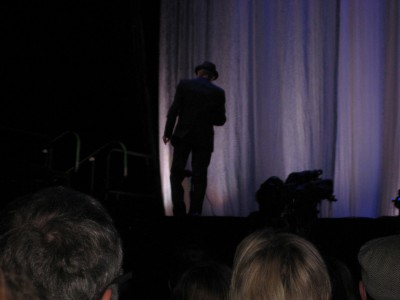 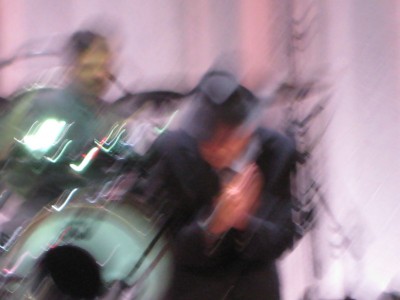 by sturgess66
A lot of good photographs here from "Callum Broom"