The poetry of his lyrics could be the defining nature of Leonard Cohen’s talent. Although the beauty and depth of his songwriting has been illustrated by the immense number of cover versions recorded throughout the years, being in the presence of the originator of such exquisiteness was an awe-inspiring experience.

Cohen has been touring regularly over the last decade. This has given another generation the ability to hear this “old man in a suit” (as he described himself) live and invigorated with enthusiasm. Superlatives are always thrown around during live concerts, but you will hear very few negatives, if any, about an evening with this master and his touring band.

Seeing the 79-year-old Cohen jog onto the stage to adoring applause was like the foreplay to a mutual love that took place even before a note was played. Each member of the band was adorned in a black suit, and the room was swept into the world of Cohen through a setlist made up of 26 songs from his storied career. This was a greatest hits show with the song order set in stone, but this did not take one bit away from the beauty and delivery of the material.

Cohen and his band are no strangers to Sydney or other stages around the world. Javier Mas displayed finesse on his 12-string guitar all night while Mitch Watkins gripped his electric throughout including during ‘The Future’, when he played some Knopfleresuqe guitar parts. ‘Anthem’ closed the first portion of the show and showcased the tremendous three-part harmonies of Charley Webb, Hattie Webb, and Sharon Robinson.

The second half of the set focused on the big-ticket numbers. Cohen and his band continued to deliver with vigour and life. The man himself gave us a memorable rendition of ‘Tower Of Song’ and, at different stages throughout, he sang on his knees, with a guitar, and behind his keyboard, all backed by the angelic vocals of the Webb sisters.

‘Suzanne’ and ‘Hallelujah’ were the icing on the cake. The audience was so quiet and hanging on every note thanks to the gorgeous Hammond B3 break by Neil Larsen and the delivery of the lyrics by Cohen and co.

The recitation of ‘A Thousand Kisses Deep’ was moving. The song was enough to witness audience members shed a few tears in joy, sorrow, and reflection of where the music had taken them in the past and what it drew out of them in the live setting. This was the church of Cohen. He displayed that he was there for the people during the showmanship of ‘I’m Your Man’ and the never-ending beauty of all the songs he delivered.

Perhaps in reflection of mortality, Cohen pondered the idea that the show may be the last time he would spend an evening with us. Whatever the future holds, Cohen maintains the ability to touch people with his soulful music over and over again. If you have put off seeing Cohen for any reason, don’t delay this any longer – get yourself along and celebrate the music with him and his excellent band.

Thank you Sturgess 66, I am almost computer illiterate. I googled to try to learn how to post the clips on here but couldn't work it out. Took an hour just to get those two clips onto Youtube. I have some more (very short, unfortunately) plus photos so will keep trying. I know how much I love to see other videos and photos.
Helps to relive the sublime experience. I am so looking forward to next Monday at the Opera House but almost don't want the day to arrive because then it will be over.
Top

Thank you very much for the video sereneava!

I found the rest - 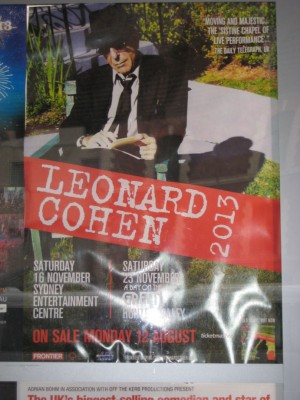 It doesn't have to be perfect, it just has to B4real ~ me
Attitude is a self-fulfilling prophecy ~ me ...... The magic of art is the truth of its lies ~ me ...... Only left-handers are in their right mind!
Top
Post Reply
50 posts