by MaryB
WOW - such a sublime, detailed report. I loved reading every word. Thank you Greg!!!!

by musicmania
Before I clicked to the next page to reply the word on my mind was sublime too. Thank you for a wonderful heartfelt review Greg.

Very well written and interesting to read.
As you mentioned 1979, this still is my favorite tour of all times.The combination of Warnes ,Bllezikjan and Hakopian is unbeatable to me.
Seen 7 shows and some sound- checks in Europe. Hakopian had much more finesse then Bublichki , and I still think Jennifer Warnes was the best female band member ever.

By the way , yesterday evening I saw here in Germany a great australian performer and his band : Nick Cave and the Bad Seeds.Amazing show,i enjoyed every minute !

Greg Ross wrote:....if a didgeridoo could talk, surely it would sound like Leonard Cohen.

by AlanM
Hi Greg,
Excellent report! It makes me feel like I was there with you, as I wish I had been.
Happy to report I have arrived in Sydney and I am looking forward to meeting Bev before the show.
To mention that I am excited about tomorrow evening would be an understatement.
My son is going with me, so all those years of Leonard playing and singing in my car on the way to school have had a positive effect!
36 hours to go.

Leonard Cohen and his remarkable band gave their all as he opened his Australian tour at Perth Arena in Perth. Stuart Sevastos was on the ground to capture the action.

by sturgess66
Video uploaded by ohdearria -

by sharon.e
Greg,
You're quite the wordsmith yourself. But that's not new.
And your report is of a man quenching a deep deep thirst with a precious glass of water.
I all the way across the world in my imagination and felt I was there for just as precious bit.

by mutti
Thank you Greg...a great review. You have quite the way with words. I still remember your kindness and open heart when we met at Wet Rocks oops 'Almost Red Rocks' way back then. Cheers
Leslie

by Andrew (Darby)
Great report, Greg... you indeed have a way with words.

by sereneava
Dear Uwe +Susanne
I loved reading your post. Thank you for sharing. All the others who share also. Reading so much on this forum this past week has made me feel like a child waiting for Christmas. Only seven and a half hours to go. Hello to everyone else who will be at the Ent. Centre tonight.
Susan

Thank you so much for your lovely comments on my review of Leonard's Perth concert, it means a lot to me (like the banjo for Lenny!). We have had a marvellous time, not just with the concert, but also in meeting and breaking bread and drinking wine with Gery and Aad (from Holland) and Christelle (from France), they did indeed come so far for beauty ... Leonard and the band gave it to all of us and more!

We also had an unexpected, albeit necessarily brief opportunity to meet Leonard, not only did he sign a photo I took at the 2009 Sandalford Winery concert, he also signed my copy of The Book of Longing then put his hand out to shake mine, thanking me for my support! But you've got to laugh - it was probably the only chance I will ever have to meet the Master and take a photo of the occasion - well you would expect me to take a photo wouldn't you!

I did, two. And guess what! The camera was still set to night / no flash. The first shot of Leonard signing, was completely out of focus ... and the second? It didn't work!!!
BUT ... we have the music!! Anyhow, I've Photoshopped the first photo into my version of a Leonard painting ... it almost works ... I think!!

Speaking of photos, here's a link to my website, where the there is a gallery of photos, some of which are in focus!!!, to accompany my concert review.
http://www.gregross.com.au/news-and-opi ... ours-plus/

by sturgess66
Another review from this show -
http://xpressmag.com.au/leonard-cohen/

"if the opportunity does arise to catch Cohen live, you’d be a fool not to grab it with both hands. It was the show of the year, hands down." 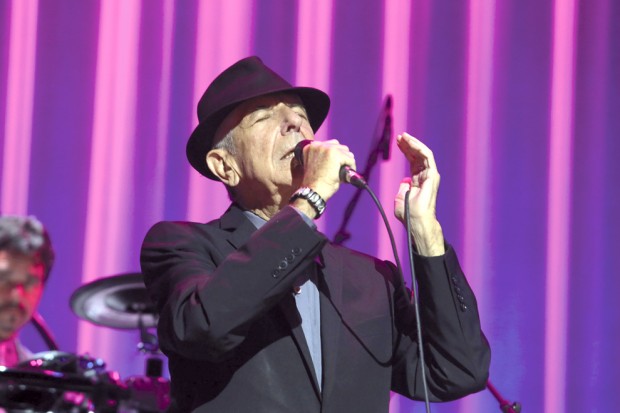 At the age of 79 years, the legendary Leonard Cohen skipped out onto the stage at Perth Arena, played for three hours and change – not counting a 20 minute intermission – like it was nothing and then danced off appearing as grateful to the assemblage of fans for listening to him as we were to be allowed to listen. Younger performers, take note; your tantrums and truncated shows do not impress.

It was, simply, a fantastic night, utterly bereft of filler. The first four songs alone – Dance Me To The End Of Love, The Future, Bird On A Wire, Everybody Knows – were better than most entire gigs. Cohen, still sprightly in his neat suit and fedora, is one of those rare old legendary birds who deserves the status and accolades heaped upon them. A master raconteur in the medium of song, he gets extra points for leavening his emotional, complex poetry with a healthy does of humour and self-deprecation, as when he paused following applause during Tower Of Song to ask whether the audience was humouring him, or the timeless line from Chelsea Hotel #2, ‘You told me again you prefer handsome men, but for me you’d make an exception’.

The setlist ranged across Cohen’s career, reaching right back to The Songs Of Leonard Cohen for his early, spiritual beat poet musings through to the darkly apocalyptic prophecy of Waiting For The Miracle and First We Take Manhattan (which we didn’t get until the first encore). You could have heard a pin drop during the achingly beautiful Suzanne. Long-time collaborator Sharron Robinson duetted with Cohen on In My Secret Life before taking on lead vocal duties on Alexandra Leaving, while the second encore saw backup singers the Webb Sisters deliver beautiful lead harmonies on If It Be Your Will.

And yes, he sang Hallelujah.

It’s interesting to speculate what Cohen’s cultural cache is these days. The crowd was mostly north of 40, a few individuals aside, and the Arena was less than full. Of course, this is the third time he’s played to Perth crowds in the last few years after financial malfeasance by his former manager left him close to broke, so maybe he’s been a bit overexposed around these parts. The thing is, can you be overexposed to one of the greatest singer/songwriters of all time?

According to the crowd that night the answer is a resounding no. A few made a break for the exits in between encores -and what’s up with that, anyway? – but the majority hung on to every syllable until Cohen finished on Closing Time and told us all he’d see us ‘…down the road.’ Whether that’s on the cards is debatable – it’d be nice if the dapper old gent could enjoy retirement again – but if the opportunity does arise to catch Cohen live, you’d be a fool not to grab it with both hands. It was the show of the year, hands down.

The ‘Sisters’ were there but, emotionally, Leonard, thankfully, gave no mercy.

As you might expect from Leonard Cohen he worked an almost imperceptible seduction at the Entertainment Centre in Perth last night. As humanity packed into the auditorium, I imagine Leonard was ‘out the back’ oiling his vibe, summoning us to his bedside, whetting his poetry into a magnificent point.

And what a vibe it is.

Ill fitting suit and trademark hat. Everything you would expect, except his shock of grey hair every time he reverently took off his hat in honour and respect whenever any of the exquisite musicians were engaged in a solo. Leonard, at these moments, was a deeply compelling human being. Humble. Respectful. Honouring of others. Aware of his own shortcoming as an accomplished instrumentalist. Unendingly grateful and appreciative that their sublime talent continually rarefied his poetry and music.

The Sisters were the Webb Sisters and his long time partner/collaborator Sharon Robinson. They were honey in his hive, jive, vibe. Faultless.

The Webb Sisters’ version of ‘If it be your will’ –perfect.

Cohen is obviously a heady mix of artistic sensibilities: The Poet. The Musician. The Lover. The Watcher. The Boy. The Man. The Saint. The Sinner. Artistic Heartthrob. Icon.

And woven imperceptibly into the fabric of his persona is his immense compassion and understanding of the human condition. And intelligence. His mind turns on an exquisite point. The point being that we suffer, make mistakes, need succour, and love, have to leave, forgive, remember, and get wise. That we are broken, caught, inexorable, alone, aching in and out each others’ arms is gut wrenchingly rendered in “a thousand kisses deep’

The undeniable highlight of the evening, the ageing hippie beside me reduced to tears, squeezing my hand, and then my knee, the audience hushed all around us as if the whole of humanity as one was listening to the deepest darkest most sacred secrets of the soul. As if it was Church. Delphi. Varansi. Mecca. Gethsemane. Vajrashila. And not simply Perth. A small uninspiring suburban outpost of human confluence.

And in the midst of all this, between songs, he unexpectedly (for me, having never seen him live), showed a childlike joy, skipping on and off the stage, indulging us with encore after encore, the Persian carpet beneath him a luscious symbol of his exotic and yet intimate riches, undeniably shared (as if we know him and might have a chance of knowing ourselves) with pleasure and passion.

And I am glad he sang ‘Suzanne’. I watched the river pass by, thick and mellowed in a nostalgic and personal memorial.