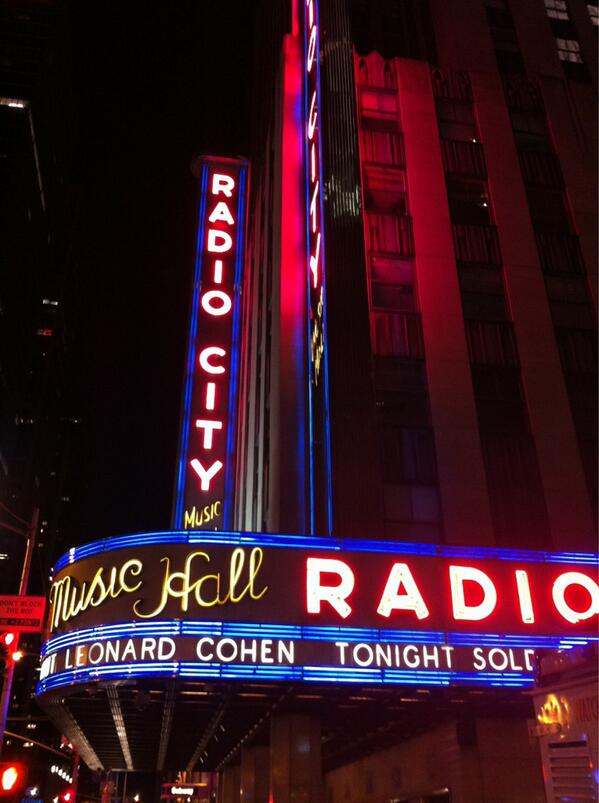 @hadaly Very glad to see @LeonardOnTour has told us what hash tags to use when live tweeting the #leonardcohen concert.

@Skolowrat -Being a good Canadian and about to see Leonard Cohen.

‏@DrinkandaCake It seems that @carlyraejepsen and I have the same taste in music. Counting down the minutes to Leonard Cohen @RadioCity. It's a dream! 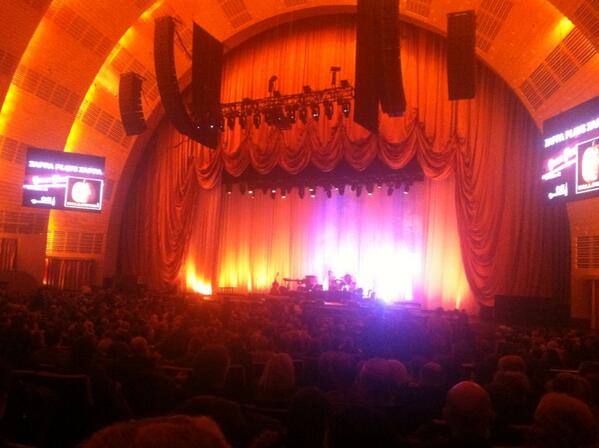 @wendycrispell - #leonardcohen is amazing! Opened with Dance me! I would totally run away with him!

@IgorBerezovsky - #Leonard Cohen concert in NYC's City Radio Hall. Give me back my broken night...

@CariCole Feel like I'm in church and leonardcohen is the preacher #greatspiritualpoets #rumi #hymns of #love http://instagram.com/p/XyPIGPsAGR/

@Palomafaith - This is Leonard Cohen from afar 1000 kisses deep. Crying my heart out. Breathtaking http://instagram.com/p/XyRPkADEIR/

@StixBull At Leonard Cohen concert. Incredible. "There is a crack, a crack in everything...that's how the light gets in".

@hjmehta - Watching #LeonardCohen #live and calling this a religious experience would be an understatement! #nyc #concert #live http://4sq.com/16D7HN7

@lindadescano - #leonardcohen is amazing - I am in total awe. Such a poet and showman. So humble and gracious. What a privilege to be at #RadioCity

@ronnyes #leonardcohen I can never get enough of your music. What an amazing artist! Thx for your unending energy @ tonight's concert.

@thecinemajack - Concert's halfway done. #leonardcohen is such a class act. So humble and gracious, with a godlike presence to him. #LeonardRC

@rgluckst - At the halfway point, already thoroughly blissed out.


@jtdrury - "You'll be hearing from me baby long after I'm gone." Tower of Song #LeonardCohen http://ow.ly/i/1Q27y

‏@rowemag - Trying to find the 3 teens I came with, I discovered Leonard Cohen at Radio City Music Hall. #easilydistracted http://twitpic.com/chkkv2

@hullaballumallu - Not only did I just get to see Leonard Cohen in concert this evening but I got to ride the F train with Elvis Costello!

@the_KY - Leonard Cohen is the definition of living legend. 78 and still a wonderful performer. Such a beautiful experience!

@jessiegorman - Leonard Cohen is the master of something quite nameless

On April 6, 2013, Leonard Cohen performed the first of two shows at Radio City Music Hall in New York. To say his show is amazing is an understatement. Some people treat Bob Dylan as their god of singer/songwriter/poetry, but my god is Leonard Cohen. At age 78, Cohen is not only on a world tour for his latest album “Old Ideas,” but his shows last for over 3 hours! He went on stage approximately at 8:20 PM and ended just before midnight (with one 20 minute break in the middle).

He announced at the beginning of the show (and addressed the audience as “friends”) that he and his band may not be the best and who knows when our paths will cross again, but he promised that they would give us everything they had. Both Leonard and band made good on that promise.

Leonard Cohen performed many of the songs on his knees and generously gave each member of his band a solo or two and was more than happy to share the spotlight as he introduced the band to us many times throughout the night. He has so many great songs with so many great lyrics that you could hear a pin drop in the 5,000 seat venue as he sang. He performed songs such as “Suzanne,” “I’m Your Man,” “Everybody Knows,” “Bird on a Wire,” and the heavily covered “Hallelujah” in his staggering 28 song set! When he recited “A Thousand Kisses Deep,” the audience practically held its breath as he delivered line after brilliant line. The last time I saw him, that was one of the many highlights of the show and once again, it stands out as one of my favorite moments.

To think that his career has seen format in the the way we listen to music change from Vinyl to 8-Track to Cassette to CD and now to digital and streaming, it’s clear more than ever that his music is timeless. Whether singing about asking forgiveness from a lover, taking Manhattan and then Berlin (which received some of the biggest cheers of the night) or democracy coming to the USA, the poetry he uses in his lyrics are beyond inspirational.

If you’ve never seen Leonard Cohen perform, I urge you to check him out on this tour because he will blow your mind.

Mr. Cohen, thank you for an amazing night, one that I will not be forgetting for a long time.
Leonard Cohen

The setlist was: Dance Me To The End of Love / The Future / Bird On A Wire / Everybody Knows / Who By Fire / Darkness / Ain’t No Cure For Love / Amen / Come Healing / Democracy / A Thousand Kisses Deep (recited) / Anthem.

2nd Encore: Famous Blue Raincoat / If It Be Your Will (performed by the Webb Sisters) / Closing Time.

I had the experience of a life time getting to meet Leonard Cohen before the show and he was kind enough to take a photo with me! Whoa! Also, I’d like to thank Dave in Leonard’s crew for helping me get a few cherished items signed. I cannot thank you both enough so all I can say is, THANKS AGAIN for blowing my mind both before and during the show!

As I was leaving the ladies room before the concert last night, I was passed by a woman in a big pink floppy hat- it was Judy Collins. I want to thank the forum for the pre sale tickets that made it possible for me to get good seats for myself and 2 friends, who are now L.C. converts.
Top

There are some good NO IDEAS here - from Leif - He got yesterday's wrong as well.

To live outside the law you must be honest
Top

The 78-year-old singer-songwriter played for three hours last night at Radio City Music Hall, falling to his knees in prayer and bouncing up again as some sort of poet-savior so quickly and so often it was hard to keep count. (Cohen is set to do it all over again tonight at Radio City.)

Though the Rock and Roll Hall of Famer has been admired for decades, starting with writing the grand “Suzanne” and winding through the decades with the poetic “Famous Blue Raincoat” and, of course, “Hallelujah,” he is in the midst of a career resurgence with his non-stop touring and last year’s stunning “Old Ideas” (Columbia) album.

Cohen played more than half of “Old Ideas” at Radio City and it’s a testament to its strength that the songs fit seamlessly among his classics. He spent much of the sprawling “Amen” on his knees, using the call-and-response with his great backing singers Sharon Robinson and The Webb Sisters to draw even more attention to his poignant lyrics. For the sly, seductive “Anyhow,” Cohen showed off his humorous side, even introducing it with his plan to take up smoking again in two years, imagining the cigarettes “gleaming like the pillars of a tiny Parthenon” and how they would lead him to being connected to an IV, which somehow cracked him up.

With all that attention to “Old Ideas,” Cohen somehow still managed to skip the album’s best song “Crazy to Love You,” though it is easy to see how the gorgeous acoustic ballad wouldn’t quite fit into the set, especially when his six-piece band was so skilled. There are so many virtuosos onstage at Cohen’s show – from the great Sharon Robinson, who was stunning on “Alexandra Leaving,” to guitarists Mitch Watkins and Javier Mas, who rolled out incredible solos in a variety of musical styles effortlessly.

However, none can compare to Cohen, who holds the audience barely singing above hushed tones, performing his complex songs so straightforwardly that he both explains them and adds another level of meaning.

And his show, broken into a 80-minute opening set and a 100-minute closing one, only picks up speed and momentum as it goes on, getting the crowd going with the disco-inflected “First We Take Manhattan” and then bringing it home with the raucous “Closing Time” that had the crowd flooding the aisles to clap and hoot along.

With this show, Cohen has merged the mastery of this craft with, well, fun, for incredibly memorable results.

SETLIST: Dance Me to the End of Love / The Future / Bird on the Wire / Everybody Knows / Who by Fire / Darkness / Ain't No Cure for Love / Amen / Come Healing / Democracy / A Thousand Kisses Deep / Anthem // INTERMISSION // Tower of Song / Suzanne / Waiting for the Miracle / Show Me the Place / Anyhow / Lover Lover Lover / Alexandra Leaving (feat. Sharon Robinson) / I'm Your Man / Hallelujah / Take This Waltz // ENCORES: So Long, Marianne / Going Home / First We Take Manhattan / Famous Blue Raincoat / If It Be Your Will (feat. The Webb Sisters) / Closing Time

And oops - I posted something that Sue7 had already posted above.
And so - now it is gone, gone, gone (my post)

he did get it wrong. Actually.

To live outside the law you must be honest
Top

Uploaded by "cathy niederberger" - Thanks!

Wheeeeeeee! They took it!
April 6th

Second encore: First We Take Manhattan, Famous Blue Raincoat and part of the Webb Sisters singing If It Be Your Will
https://www.youtube.com/watch?v=ajZxluzKn_A
Last edited by sturgess66 on Mon Apr 08, 2013 1:44 am, edited 1 time in total.
Top

Night one: Leonard was in top form with lots of smiles and banter... I was swept away by the magic once again!
He seemed relaxed and to be having a good time. I sat over 20 rows back and was amazed at how good the sound was. I had been told the middle has the best sound and although I have been lucky in the past to get close up seats I was not able to for this one and was pleased the seat. Some people were leaving after the first encore so I was able to move up closer then. Great to see Roscoe looking healthy. I did see Elvis Costello as he stood beside me before the concert started.
It was nice to see Jarkko & Eija again as well as other friends. Fantastic to spend time with Marie & Albert once again.
Nice to see other friends Wendy, Marsha, Mary, Mandy, Gwenn,Ken from Frederickton, Lizzy, Vlasta, Rachel and others...please forgive me if I forget anyone.
The New York crowd was subdued but ever gracious and appreciative. They finally let loose for Closing Time. Elegantly dressed crowd. What can I say but Thank You once again Leonard!
I am so looking forward to tonight with excitement. Having lots of adventures here in NYC.
Leslie