Oh I love the seagull story, as well as your friend's enthusiastic email, Leslie!

Almost (but not quite) makes up for my not being able to attend the Victoria concert.

(We have a seagull who thinks he works at our office in downtown Vancouver. He flies up to the windowsill with little offerings – a mussel shell, or a stone. If we don't open the window a give him some lunch, he taps on it to get our attention!)
Top

Yes Sheila I wish we both could have been there! It was fun being with you in Vancouver in November's concert.
I love your story about your seagull. The BC West Coast seagulls really are friendly aren't they!
Leslie
1988 Vancouver
2009 Victoria/Seattle/Almost Red Rocks/Las Vegas/San Jose.
2010 Sligo x 2/Victoria/Vancouver/Portland/Las Vegas x 2.
2012 Austin x 2/Seattle/Vancouver/Montreal x 2.
2013 Oakland x 2/New York City x 2/Winnipeg...
Top

He looks like "Ey I'm the original bird on the wire. Copyrights : do you know what it means?"

"oh tangle of matter and ghost"

Must be Jonathan himself.

In the article, at the end there is no mention of the violinist in the 9-piece orchestra. I listen to some you tubes and the violin...so very good...
***
"He can love the shape of human beings, the fine and twisted shapes of the heart. It is good to have among us such men, such balancing monsters of love."

I heard,the next 2 shows are cancelled !!!

Has anybody insider info on this news ???
Top

Has anybody insider info on this news ???

Regina rescheduled to April 28 and Winnipeg to April 26 due to flu. Leonard really didn't want to do it but they consulted doctors and some of the folks will not be recovered enough to even do Monday's concert. If you have read Leif's blog, you know flu has been ravaging the crew since they hit the road in Oakland.
Marie
Speaking Cohen
Top

My chicken-soup-like warm regards to any sick member of the band. Take time to recover, the flu can be so very bad. I take the occasion to thanks every indefatigable musician and singer for their faithful devotion to the God of Music, for the Grace and the Joy. The beautiful violin adds a zest of romanticism to their huge and appreciated talents, not enough stressed by me, here. Be well back on the road!

I am a member of the forum and I live in Victoria. Yes, he did "Show Me the Place" and it was one of the highlights of the evening. I was stunned by his performance of that song and I think Leonard is bound to win a JUNO Award (Canada's Music Awards shoiw) this spring. My friends think I am a bit of a Cohenhead since I have been to five concerts since 08, not counting one way back in 1993. The concert here on March 6 was my favourite. The crowd was wonderful and Leonard and the Band appeared to be having a great time. Leonards story about the feeding the seagull breakfast was great fun. Six friends of mine were at the concert and they all loved it. 11 out of 10.
Top

Leonard Cohen had the Victoria crowd in the palm of his hands at his recent arena show (photos by Jason Schreurs/Nexus).

When Leonard Cohen climbed to the stage of Save-on-Foods Memorial Centre on the night of Thursday, March 7, a packed arena of fans stood as one and wrapped him in a roar. Cohen opened with “Dance Me to the End of Love” and sealed his connection with us by dropping to his knees while he sang, eyes closed, holding the air around the mic as if embracing a lover. A perfect night where lovers meet, prepared to be romanced.

Cohen laid each song at our feet, beginning with a breathless promise to us spoken deep into the mic: “I don’t know if we’ll ever meet again, no one can ever know, but I can promise you tonight we will give you everything we’ve got.”

Two characters vied for centre stage. Cohen’s hat played with us. He spoke with it. It was removed at times and held it against his heart, or pinched between two fingers and held out towards us in a sign of respect. And the lighting vamped with a lush backdrop and wings, from floor to rafters, of elegantly rippled panels, and just a touch of mist. A speakeasy palette bathed the drapery from blood velvet reds to glass-tinkling turquoise, golds, and magentas.

The set was swank-classy. Persian rugs, red upholstered chairs, a bluesy costume design all in black and white. The female backup singers sexy in tailored suits, slacks, and heads of artfully piled hair. Roadies sported fedoras every bit as provocative as the performers. He took care to introduce us to the band, his friends, to get to know each other.

Song after song, each flowed seamlessly into the next; Cohen wooed us into letting go. I relaxed by degrees, with deep satisfied sighs, pleasured by that signature sustained growl, incomparable poetry, and sage humour.

Cohen spoke his famous “Thousand Kisses Deep” instead of singing it, teaching us a new form of communication, as is his special gift. A famous song, reworked; it was ballsy and fresh.

Sharon Robinson, Cohen’s long-time collaborator, took the stage alone for “Alexandra’s Leaving.” A majestic, imposing woman, by the time she was finished she’d reduced me to tears of sadness for half-forgotten first commitments.

The experience, despite being over three hours, ended too soon. “Well, I tried to leave you,” Cohen joked after three encores, and we laughed. He acknowledged our longing to put off the inevitable, by saying “You know, they outta hand this night a ticket for speeding.”

Cohen finished with “I Closed the Book on You a Hundred Times,” and with a last wave he was gone. In the glare of the overhead lights we shrugged and accepted that it was closing time, sustained by knowing when next the sun sets, and the lights go down, the magic will begin again.

Thanks to everybody who are generous enough to share memorable moments of this 2013 tour, by the way.

A nice video on Vimeo uploaded by "stlombo" - Thanks!

sturgess66 wrote:A nice video on Vimeo uploaded by "stlombo" - Thanks!

Very lucky to have come across this rendition so dear. LC asked Alexandru for "one more, one more". So lovely and beautiful.
Top

Very lucky to have come across this rendition so dear. LC asked Alexandru for "one more, one more". So lovely and beautiful.

Six weeks ago I had a profound religions experience at the corner of Blanshard and Fisgard.

I was in the Save-on-Foods Centre.

I do not know if one is allowed to have a religious experience in the Save-on-Foods Centre, but that is where it happened. I was not alone. I was with an estimated 5,999 other people sitting on little folding chairs on the main floor of the arena, or packed in tiered seats on three sides peering down on the stage at the east end of the auditorium.

We were gathered to listen to a 78-year-old man with a nine-piece band perform three and a half hours of sublime mystical music.

For all his nearly eight decades, Leonard Cohen takes the stage like a man on a mission. He sings with the intensity and focus of an evangelist of the spirit.

Of the thirty songs Cohen sang in Victoria on Wednesday March 6, six were from his 2012 album “Old Ideas”.

The old ideas of which Cohen sings are ideas of love and forgiveness. He is an evangelist of hope who finds the possibility of beauty in the brokenness of the human condition. He is a poet who sings in praise of the enduring power of life even in the face of deep suffering.

Leonard Cohen is not afraid of failure. He is not frightened by the darkness that lurks always at the edges of his poetry. He finds light in the midst of the difficult places. And through it all, after all these years, Cohen sings on; he still believes in the possibility of healing. In the voice of the Divine Cohen encourages his audience “to gather up the brokenness/ Bring it to me now / The fragrance of those promises / You never dared to vow.”

According to the Divine voice speaking again in “Going Home,” Cohen “wants to write a love song/ An anthem of forgiving / A manual for living with defeat.”

Most of all, Cohen seems buoyed by his vision of the enduring power of love. In his beautiful prayer “Amen” he pleads, “Tell me again when I've seen through the horror / Tell me again tell me over and over / Tell me that you'll love me then / Amen.”

In front of 6,000 people an old man sings for three and a half hours about his trust in a love that can never be defeated. He pledges his trust in an unseen power that never dies, never goes away, and can never fail.

Leonard Cohen invites his audience into a deep religious experience.

As I sat surrounded by an auditorium filled with mostly strangers, I felt the rusty hinges of my tired old heart creak open just a little. And I knew, that the power of which Cohen sings had touched something deep in my being. The possibility of light was reborn in the darkness. The world seemed a more gentle place, the human community perhaps capable of a little more tenderness.

This is evangelism at its best.

My experience at the corner of Blanshard and Fisgard is the reason I find myself every Sunday on a different corner gathering with a much smaller group of people to sing and offer collective prayer for light in the midst of brokenness. The weekly gatherings in which I share do not always have quite the power of a Leonard Cohen concert. But, they are times when I can bring the broken shards of my being, and be pointed towards a healing presence that transcends the twisted pain of so much of life. I need this reminder. I need this constant encouragement that there are life-giving ways for “living with defeat.”

Christopher Page is the rector of St. Philip Anglican Church in Oak Bay, and the Archdeacon of Tolmie in the Anglican Diocese of B.C. He writes regularly at: www.inaspaciousplace.wordpress.com

Sitting outside near the water at Granville Island in Vancouver having a coffee I saw this sign and had to post it!
Leslie 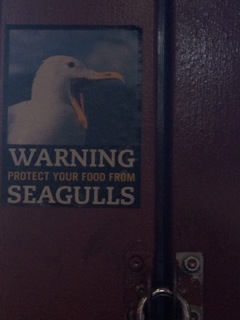