"I HOPE this is not some sort of compassion for the elderly," opined Leonard Cohen after tumultuous applause greeted his somewhat pedestrian keyboard solo during Tower Of Song.

And it wasn't. It was more idolatry as the audience, perhaps wondering if they would see the like of Cohen passing by this way again, listened in hushed reverence.

That's not surprising as the Canadian is 80 next year. Not that you would know it as he bent, crouched, ran and danced his way through a three-hour, nigh-on 30-song set of two halves on the first British date of the Old Ideas world tour.

The first half of a beautifully staged and lit show was mainly newish songs, many with a klezmer feel, as the sharp suited, behatted Cohen managed to make the BIC feel intimate.

We had the likes of Dance Me To The End Of Love, The Future and the magnificent Who By Fire, complete with lengthy Spanish guitar intro by the virtuoso Javier Mas, interspersed with Bird On A Wire and Everybody Knows.

With a brilliant six-piece band and three singers in Cohen's muse Sharon Robinson and the Webb Sisters, we had a sumptuous sound and a generous host who would reverentially remove his fedora and move to the shadows of the carpeted stage as he allowed his co-performers to express themselves.

Cohen has a reputation as being a melancholy miserabilist as his lyrics certainly reflect love and loss and missed opportunity and regret, but the truth is his demeanour is bright and his performance almost effervescent The second half had a more familiar feel as we heard Suzanne, The Partisan and Alexandra Leaving, before building to Cohen's 'reclaimed' version of Hallelujah and Take This Waltz.

He danced off stage to a standing ovation, returning three times for encores including So Long Marianne, Famous Blue Raincoat, the self-deprecating Going Home and a storming First We Take Manhattan.

The ever-gracious Cohen has reached a far higher level than so many other performers because his words and the exquisite way he presents them seems to transcend mere music and poetry and has created this fabulous show witnessed by a very lucky audience.

Jim - As well as no "Anthem" and "Sisters of Mercy", there's no "Hey That's No Way To Say Goodbye". I feel sorry for a friend of mine, as she was seeing Leonard for the first time. Personally (and I think you'll agree) I would rather they drop "Lover, Lover, Lover" and most of the stuff from "Old Ideas" if these are to be excluded. That said, I would like to hear "Show Me the Place" live, but that never seems to get played in the U.K. It would also be good to hear "Heart With No Companion" and "Avalanche".
Top

We both find it quite bizarre when Sisters of Mercy is not on the set list. It is for many still his iconic song and no doubt for a lot of us one, if not the first song that made an impact but at least Famous Blue Raincoat was there on the night.

Directly in front of us in the front row was a very large security guard who faced the crowd and who sat on a chair with his back to the stage. I was talking with him moments before the 1st encore and the next thing he had disappeared through the black curtain with his feet sticking in the air, he had fallen straight over the back of his chair and he, the cameraman and a few of us were still in fits of laughter when the band came out on stage again.. Just thought I'd mention it

Nice to see Bruno (again) with his lad, Ben (first timer) Eve, Gilly and her Brother, Robert (also a first timer) and several others in the Moon of the Square before the concert.
I guess it all started for me sometime around Christmas 1967 and now, goodness me, it's.........2018 and over fifty years later.
No one ever listens to me. I might as well be a Leonard Cohen record.
Neil from The Young Ones
Top

Of course I prefer to hear rarer or older songs instead of the old ideas stuff, but I understand that's what the tour is for ans still love those tracks too! Would love to hear "crazy to love you", such a great song. One of his best.
Top

A great concert last night, the maestro continues to astound with his energy and ability making his age hard to believe (the only sign of his age was his own self-deprecating reference to it). He was on top form, as were the band and singers. The whole concert was uplifting, putting the lie to Cohen's reputation for gloom

It was an interesting comparison with 2008 and Cohen's last visit to Bournemouth. The presentation of some of the songs was different - the first half tended to a quieter tone and the encores a louder one: First We Take Manhattan was a real rocker yesterday. The pace of the first half was quite different, mostly because of a block of four tracks from the new album. The tracks were well received but the audience were clearly less familiar with them so quieter in their attention and applause, always the way when presented with new material.

I was pleased to hear the new tracks though and it would have been a little odd, on the 'Old Ideas World Tour', not to play tracks from the 'Old Ideas' album. The second half was back to well known numbers and ratcheted up the reception toward rapturous (and this is Bournemouth). Special mention too for Sharon Robinson's lead vocal on Alexandra Leaving, she also was on great form.

The concert ended at almost exactly 11 o'clock so perhaps the curfew, or the 10 minutes late start, cost us a couple of tracks. What was played was excellent and, with a back catalogue the size of Cohen's, he can't play all of everyone's favourites.

PS On the set list, my memory is that First We Take Manhattan was the first track in the second encore rather than the last in the first encore 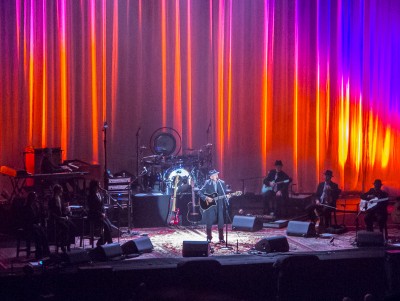 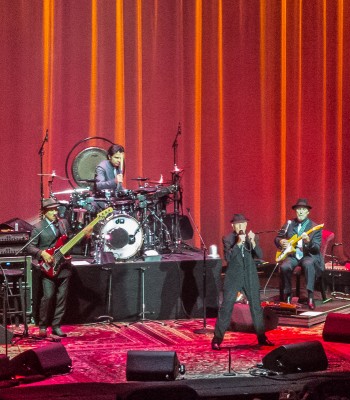 Poor Leonard, some people complain that he doesn't vary the setlist enough then when he does, others say they wish he'd sung the same songs as last time!

I can only add Leonard was as amazing as ever, I really don't know where he gets his energy from - he goes from strength to strength.

One of my favourite songs that was missing was 'Hey that's no way to say goodbye', but again other favourites were there.

I also had the pleasure of my first meet-up with some wonderful people from the forum and I'm really looking forward to tomorrow at Brighton, hoping to see you all again.

Until tomorrow, Eve
I heard of a man who says words so beautifully that if he only speaks their name women give themselves to him.

I actually liked hearing some of the new songs as well as the classics. I love 'Old Ideas' . I did notice Sisters of Mercy was missing, which was a shame, but it didn't spoil it for me. I think one of my highlights was Sharon Robinson singing 'Alexandra Leaving' -absolutely beautiful. We had great seats - thank you Jarkko and AEG for the presale - and rarely see BIC audiences as animated as they were last night. I would have liked to have been up on my feet and dancing before the encores - but no-one else was so thought I had better stay seated! A wonderful evening!
Top

christineanne wrote:Poor Leonard, some people complain that he doesn't vary the setlist enough then when he does, others say they wish he'd sung the same songs as last time!

I know what you mean I love all Leonard's songs wish he could play them all but thats impossible, I dont care what songs he plays I a just grateful to see him that for me is enough he can play whatever songs he likes Im still giving him a standing ovation after every song in manchester

Sounds wonderful, I'm going to Brighton tomorrow and can't wait How were the camera rules in Bournemouth, were bags searched?
I'm dithering over what camera lens to pack and have only had difficulties in Kilmainham.
Top

Thank God I'm in the front row, but I fear the paparazzi may be there, too!
Top

I'm in the 3rd row but hope to get a few photos and I'm just a bit concerned about the security.
Top

I am lucky to be in the front row too, I sometimes think that while you are fumbling about getting photos you are missing the flow of he songs.
I will maybe just take a couple if we are allowed to, then just sit and enjoy, enjoy enjoy - can't wait -
Somebody must have died for you
A Thousand Kisses Deep

sandraa wrote:Sounds wonderful, I'm going to Brighton tomorrow and can't wait How were the camera rules in Bournemouth, were bags searched?
I'm dithering over what camera lens to pack and have only had difficulties in Kilmainham.

Standard rules are no SLRs; compact cameras are usually OK. Please leave the big camera at home for its own protection and for the sake of fellow concert goers.