by cohenadmirer
If it be your Will

At the start , while Leonard is reciting , there is a loud 'shout' from someone in the audience
Does anyone understand what the guy was saying ??

by tina
Another great evening. I really enjoyed to hear Leonard speaking french and singing la Manic. I had the impression, that especially Mitch Watkins and Javier Mas laughed a lot this evening.

So, a great concert with a even greater Leonard Cohen. Hopefully not my last one.

At the start , while Leonard is reciting , there is a loud 'shout' from someone in the audience
Does anyone understand what the guy was saying ??

David - thanks for your very good video! And a lovely performance.
Wow - that is loud yelling.
In his "NO IDEAS" blog - Leif Bodnarchuk mentions someone -


Sung by Sharon Robinson, Alexandra Leaving got a great response, and one gentleman in the neck-break seats I mentioned in the previous entry was probably a bit lathered up, yelling enthusiastically during a few quiet moments, but he either (finger-quotes) disappeared, or made his way elsewhere. Aside from that dude, they really were a good crowd tonight; hats off to you Brussels, we look forward to hanging around in your lovely city tomorrow.

Then in the comments:

Tim says: I wonder if the gentleman shouting was not in fact a Flemish nationalist who was annoyed that Leonard had spoken in French and not Dutch. It is Belgium remember where these things are very sensitive. Superb night though.

Reply - Leif says: Ah, you never know — I must admit, I didn’t understand what he was saying…

And - just noticed on YouTube - more good video of yours -

First We Take Manhattan - including good shots of audience -
http://www.youtube.com/watch?v=y_ZOKqPwfVA

by IrishAL
some video.
La Manic.

by DominiqueBe
For those who don't understand French, here's an English translation of La Manic :
http://lyricstranslate.com/en/la-manic-manic.html
The song is about a worker on the Manic (an hydro-electric dam) construction site, talking to his wife.
Leonard also sang it in Paris, and I think he said he was working on an English version.
I'm a French-speaking Belgian, and I was so happy to hear him speak and sing in French!
Another proof of how he pays attention to the audience.

by Annick
The Brussels' concert was, as usual, pure pleasure - but I have to say it once more and every time again

by musicmania
My review. Will share photos as soon as I get them sorted.


Having spent a fortune seeing Leonard Cohen in concert over the last year and funds starting to run low I had to decide on one European mainland location and when Brussels was announced for the day after my birthday it was decision made to go there.

I've being dismayed with how since late last year Cohen concerts have been delayed due to the audience not being in their seats at the scheduled time so it made me determined to arrive extremely early and got there before the doors even opened. I wasn't sure what to expect of the venue after hearing negative reports but on entering was pleased to see it didn't look too bad and our seats were in a great location, 3rd row directly in front of Javier Mas.

After the delay to allow the seats to be sufficiently filled Cohen and his band came on stage to a massive cheer by a delighted audience. After the opening song Dance Me To The End Of Love Cohen thanked us for coming and to those in the high seats for climbing to those high places and for those of us at the front for paying so dearly. As always every song performed was amazing and every song a highlight. In the opening half my favourites included Who By Fire. I don't know if it was my close proximity to Javier Mas but for me it was my all time personal favourite rendition. Mas is a musical genius and his solo at the start this song gave me goose-bumps. I also loved the extended applause after his solo and when Hattie Webb joined in on the harp and Roscoe Beck on stand up bass. This applause lasted for the entire first verse. I never witnessed this before and on reading the No Ideas blog from technician Leif Bodnarchuk I see he has never witnessed it either.

Hallelujah aside, my other favourite moment was when Cohen recited A Thousand Kisses Deep. I adore this and Cohen doesn't normally quote it at non-English speaking countries so I was delighted and moved to tears when he did it, focusing completely and soaking it in. Other first half highlights included an as always sublime performance of Bird On The Wire and Lover, Lover, Lover. I do confess I prefer the version sung on the previous tour but judging this version on its own merits it is great and I love the new arrangement at the start of the song. We found it amusing when Cohen started chanting nearing the end of Darkness as we have no idea of why he is doing it but it adds an air of mystery and makes for a good discussion after the concert! Maybe someone reading this can explain it to me. We were also discussing the line change in Anthem from "the dove is never free" to "the dove is always free".

As always Cohen opened the second half with Tower Of Song and like we had witnessed in New York is continuing to joke about his keyboard abilities and running his elbows along the keys. Having looked at the set lists for recent concerts and seeing both Sisters Of Mercy and Heart With No Companion I had prayed they would remain for this concert so was delighted when they did. As Brussels is a French speaking country La Manic and The Partisan were both performed and received a huge reception from the audience. I love when during The Partisan Neil Larsen comes down from being the organ and keyboards to play the accordion.

Sharon Robinson as always was amazing when singing Alexandra Leaving. Hallelujah as usual for me was my absolute highlight and the final song of the second half Take This Waltz, with an as usual exquisite solo from Hattie Webb and hauntingly beautiful violin playing from Alexandru Bublitchi was great.

As Cohen did his band introductions at the end of Take This Waltz some of us raced to the barriers. The barriers were closer to the stage than in Dublin last year, so I really enjoyed being the closest I have been to Cohen as he performed, since Katowice in 2010 for the encores. While I did of course love the Canadian and New York concerts I do admit I missed being able to stand in front of the stage singing along to So Long Marianne, First We Take Manhattan and Closing Time. These songs all got a great reception with lots of interaction from the crowd which pleased everyone on stage. The crowd reaction after an as always excellent Famous Blue Raincoat was so loud we could barely hear Cohen speak after it!

I understand the times when to be quiet at a Cohen concert but there was one person who in the tiers didn't and it didn't go down well with me or those around me when he started shouting when Cohen was reciting at the start of If It Be Your Will. The Webb Sisters as usual though were outstanding singing this and also as usual for this song I couldn't stem the flow of tears.

I always love when I Tried To Leave You is in the set list as it includes solo's from the entire band. My favourite part of this is Rafael Gayol's solo where he throws his drumstick in the air and catches it. For the encores I enjoyed being able to see Mitch Watkins as he was hidden from my view for most of the concert. However I still appreciated his input and enjoyed hearing his contribution and especially during Bird On The Wire.

The actual songs aside I just loved the entire feel of this concert. Cohen and everyone on stage was in great form with lots of smiles in appreciation to the audience reception. With the exception of the one person shouting I thought the crowd to be excellent and it always makes me feel good when I am a part of such crowds. I felt this was a very special concert where especially with the slower songs in the gentle way they were performed. In trying to put this feeling into words and thinking about it the only description coming to mind is that of sitting near water and the songs being like waves, soft and soothing during the slow songs and then more powerful but still breathtaking during the faster songs. It was simply magical and a night I'll never forget.

musicmania wrote:My review. Will share photos as soon as I get them sorted.

I thoroughly enjoy well written reviews such as this which give a real feeling for one person's concert experience. It leaves me with the sensation that I was there ! Thank you Musicmania. 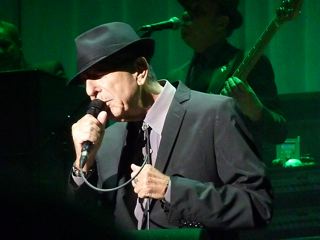 thank you for the great review musicmania!

Your review are always so well phrased and a joy to read. I am glad you got to see the "TOS' antics. If I am not mistaken, the first time he did this was the second show in Boston 2012, where he was bolstered by the audience reaction and he 'had no choice'

Thank you for you post. Ute, I love your photo - I guess you were pretty close

by musicmania
Thanks FanForLife, Ute and Mary. Great photo Ute. I saw the TOS antics in New York Mary but was good to see it again

I will be sorting photos for my blog later today and will share them when done.

by musicmania
My photo highlights from the concert.

by musicmania
Thanks Albert, wonderful videos as always