Just returned from the Mannheim concert, 600 km by car and a few days off in the city.
We were with six Cohen fans, and all were very happy at the end of the concert.
I think this cannot BE better than last friday.
In holland we say"WAAAAAAAAAAAAAAAAAAAAAAAAAAANZINNIG GOED"
Translated in english? AMAAAAAAAAAAAAAAAAAAAAAAAAZING GOOD.
Every body were in GREAT shape.
Top

Video uploaded by Wildpark85 - Thanks!

Bird On The Wire
http://www.youtube.com/watch?v=2wv68XGzX2U

Heart With No Companion / Waiting For The Miracle
http://www.youtube.com/watch?v=ESREOCU9GR4

If It Be Your Will
http://www.youtube.com/watch?v=SHfX-bkqL3I
Top

sturgess66 wrote:Heart With No Companion / Waiting For The Miracle
http://www.youtube.com/watch?v=ESREOCU9GR4

It would appear that Austin, TX has completely taken over Heart With No Companion. I love it. This is a great arrangement.
Top

More videos from the concert in Mannheim:

Bird on the wire
http://www.youtube.com/watch?v=mD4qn_6MrD0

Waiting for the miracle
http://www.youtube.com/watch?v=0EdFyoxVdNg

After being to this wonderful concert (due to circumstances my first one since Mr. Cohen has been in Eppelheim 1979, though always following his great work), I would like to thank you for uploading and sharing all these videos!
Top

PeGu wrote:I've come across the first critical review of the concert. I tend to disagree with the critic in one or two minor points, but overall, it's worth having a look at. I hope there will be more reviews to come with slightly more substance with respect to the actual music (this one, however, is a quick first post, the critic did not have a lot of time to write it, and I have the feeling, it was the young man with the Russian cap sitting next us in block 105

(It's in German, should I provide a transation?)


Thank you for the interesting link, PeGu

.
I couldn't help noticing that the author provided a mistranslation. Leonard's question "Are you humouring me?" does not mean "Are you making fun of me?"...
Top

Now that I'm back from Paris (the day after Leonard I had to get to Paris to see Mr. Springsteen.

Now my concert summer is over.

) I would like to write a few words about the Mannheim show.

I had a seat on the tribunes to the left. When I saw the seat, I was at first shocked because this was clearly not what I thought buying when seeing the map of the venue on eventim... Nevertheless, it was a great seat. I was sitting sideways to the stage, very close and it was an interesting perspective to see what happens behind the stage, to see the band before it comes on stage and so on.

The concert was just great. I was disappointed in the London show the week before, because my seats and the sound were terrible. In Mannheim, everything was perfect. Leonard and the band in great shape, interesting setlist (I loved to hear Choices. The only thing I was missing was A Thousand Kisses Deep which was truly moving in London) and a concert that felt as if it was not shortened by a curfew. Very long set and a great evening. I was quite sad throughout the show, because I just had this feeling as if it was my last Leonard concert. Let's hope that he comes back on the road again. But if he doesn't, it was a worthy finale.

PS: I also noted the issues with the air conditionning, especially during Alexandra Leaving. Oh, and I also noted that Leonard seemed to have shortened Darkness. He goes right into "I should have seen it coming..." He already did that in London... I prefered the long version.

Sorry for the long delay, blame it to my boss who keeps thinking, the work has to be done, regardless of the time available...

However, at long last, I have managed to provide a translation of the early concert report I had linked to in a previous posting. It has proven to be quite difficult for me as a non-professional translator to solve all the intercultural and interlingual problems the text offers. So, whenever you feel you don't understand what the critic wants to say, assume it's my translation rather than his text.

In front of a sold out audience at SAP Arena, Leonard Cohen again proves why he is counted amongst the great entertainers of our time: Charming and full of humour, he takes us through an epic, yet always entertaining evening of more than three hours, which he also uses to honour a great singer who has passed away only recently.

Some years ago, Leonard Cohen realised that his long-time confidant and manager had emptied his accounts meticulously and only left him a small fraction of his huge possessions. To improve his financial situation, Cohen decided to go back on tour after a fifteen-years abstinence/break.

The financial thoughts might have been important for the decision of a comeback [sic!], but nobody forces Cohen in his regular tours since 2008 to stay on stage for three hours and more. And that happened in Mannheim, too, where he was enthusiastically celebrated by 9,000 in the sold out SAP-Arena.

Roughly from 20:15 to 23:40, Cohen plays two sets and three encores only with a short break between them; he presented a plethora of classics from all phases of his carreer and some new songs. Of the latter, Going home, with the lines "I love to speak with Leonard / He's a sportsman and a shepherd / He's a lazy bastard / Living in a suit", which were greatly applauded by the audience, had the greatest impact by far.

Apart from that, the evening provides [sic!] many opportunities to get to know all of Cohen's facettes. One can lie in each other's arms with the emotional So Long, Marianne, one can marvel at the seductive, slightly ironic elegance of I'm your Man, or one can dive into the darkness of Tower of Song. First We Take Manhattan, which still remains enigmatic, showcases Cohen's revolutionary side, while The Future and Everybody Knows thematise disgust and disappointment with the world.
As a counterpoint there are the slightly too obtrusive esoterics of Come Healing and the much celebrated Lover, Lover, Lover - Cohen's biggest hit in Germany. Additionally, Cohen seizes the opportunity to remind us of the country-singer George Jones, who died in April, with his hit Choices.

Cohen's smoky voice carries even a long concert without obvious problems, especially when it is congenially accompanied by such excellent singers like Sharon Robinson and the Webb sisters. However, during the past months, it seems to have lost some of its volume. It might as well have been the mixed sound, which was generally excellent like usual in the SAP Arena.
The band appeared to fit together very well, and they played soflty and emotionally, yet clearly. The prominently featured violin player Alexandru Bublitchli takes on a very important part, and he is given many opportunities to make use of his Balkenesque style. Cohen's long-time companion Javier Mas plays the Banduria most of the time, while the wind instruments, sometimes used in the beginning of his comeback, are completely absent.

As usual, Cohen appears as a charming and entertaining/funny host. Right in the beginning, he thanks the audience in the upper circles for having climbed so hig. Then, he honours the audience in the stalls, to remain fair.
When the audience enthusiastically cheers Cohen's rudementary keyboard playing in Tower of Song, he answers "Are you making fun of me?" [sic! obviously, the author mistranslates "Are you humouring me", which can be mistaken by a German speaker as literally "are you making humour, i.e., fun with/of me"] and continues to show more of his trick on the keyboard. The following "I was born with the gift of a golden voice" is of course cheered as much.

Despite of all the charme, Cohen should mind too excessive use of some habits. He should not go down to his knees in every song or take his hat off for every solo of his fellow musicians. All that ruins the effect of the gestures and reduces them to an empty posing.
Those whims, however, hardly injure the general effect of the concert. Towards the end of the regular set, the audience storms into the inner circle to the stage to be as close as possible for the encores.
When the swinging Closing Time is followed by the pensive I Tried to Leave You, it is the right time to state how infinitely important Leonard Cohen's music is -- then and even more today. One nearly needs to be thankful to his ex-manager -- who knows whether he would be touring and offering these unique experiences to his fans.

Dance Me to the End of Love | The Future | Bird on the Wire | Everybody Knows | Who by Fire | Darkness | Choices (Billy Yates cover) | Amen | Come Healing | Lover Lover Lover | Anthem || Tower of Song | Suzanne | Sisters of Mercy | Heart with No Companion | Waiting for the Miracle | The Partisan | Alexandra Leaving (Gesang: Sharon Robinson) | I'm Your Man | Hallelujah | Take This Waltz
Encores:
Encores: So Long, Marianne | Going Home | First We Take Manhattan | Famous Blue Raincoat | If It Be Your Will (Gesang: Webb Sisters) | Closing Time | I Tried to Leave You
Lörrach 2008, Wiesbaden Wiesbaden 2010, Mannheim 2013
Top

Thank you for doing this! It is very clear and enjoyable to read.
Top

This photo taken by tuffy85C is somehow magnetic, isn't it?
Caption: Music is Magic!!! 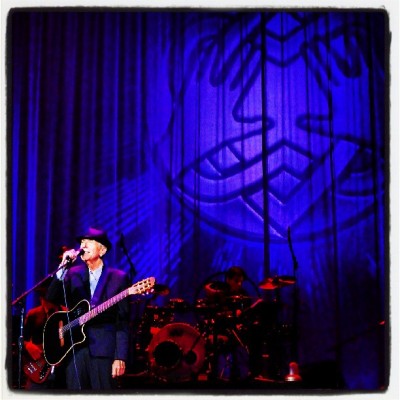 Here's another review of the Mannheim show: 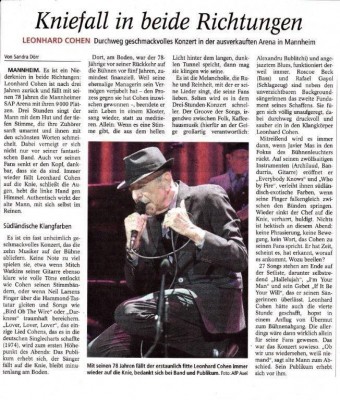 With thanks to Doris who found and scanned it

I´m very sorry that I can not translate the review, for unfortunately my english is not enough.

Many thanks to Heike for insertion.
And all I´ve said
was just instead of
Coming back to you.
Top

More video for this show - uploaded by Mahdi Mond -

Waiting For The Miracle
http://www.youtube.com/watch?v=CDWcmm12IiU