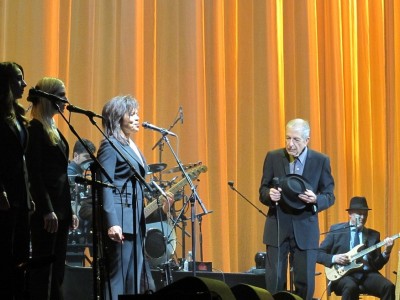 Last night of this years tour. Here are some videos:

In My Secret Life
http://www.youtube.com/watch?v=AUq5vQiyFXQ

There's a crack, a crack in everything, that's how the light gets in!
Top

Wirebird/Henry - thanks for all the good video! 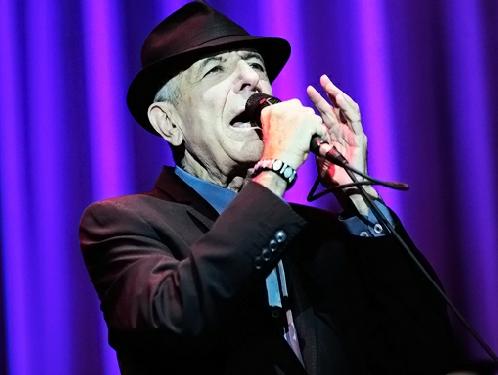 I’d think it would be safe to say that 2012 was the year of the codger. Among the many best-of-the-year lists in current circulation, you can find: (55 year old) Bob Pollard’s Guided By Voices, (63 year old) Bruce Springsteen, (64 yr old) Jimmy Cliff, (65 yr old) Patti Smith, (67 year old) Neil Young's fierce tour and new album with Crazy Horse, (68 year old) Bobby Womack, (70 yr old) Brian Wilson’s reunited Beach Boys, and (71 yr old) Bob Dylan, whose inspired Tempest may be the result of early onset dementia. The king of the alta-cockers would be Leonard Cohen, who at 78 released Old Ideas, an album which finds the Jewish-Buddhist poet at his most dark, cool and classic. When he took the stage at Barclay’s with his six piece band and trio of lady backup singers for some songs of love and hate, no one was expecting the septuagenarian to treat Brooklyn to a three-hour dive into one of the most intense songbooks in music.

Looking sharp as always, like the missing link between Tony Bennett and William. S. Burroughs, Cohen sauntered onstage to a gregarious amount of applause, followed by the audience sitting down and shutting the fuck up, thinking “let the man speak.” He broke into “Dance Me ToThe End Of Love”, the band thumping like a gospel group from the Church of Badalamenti, complete with a Lynchian backdrop reminiscent of Twin Peaks’ Black Lodge. His baritone croon has gotten darker and sweeter, and he very quickly took to his knees to sing, possibly as a dramatic effect, possibly as a religious reference.

Surprisingly, Cohen started bringing out the hits early on, with the bleak, German “The Future” and the classic lament “Bird On A Wire” (known by many through Joe Cocker’s inspired cover.) Cohen’s band, ever restrained for much of the set, leaving room for the poet’s masterful diction, stretched out to reveal tasteful and interesting players, including a flamenco guitarist from Barcelona, a jazzy, Manzarek-esque B-3 organ player and a Klezmir/Gypsy leaning fiddler. Standing out even further were the much featured backup singers, U.K.’s country-inflected Webb Sisters and soulful Sharon Robinson, an artist in her own right; they performed the sour stomp “Everybody Knows,” which Robinson co-wrote with Cohen.

“Sometimes I drag myself out of the bed, look at myself in the mirror and say ‘lighten up, Leonard.” For an artist who is almost parodied for his gloominess (“no one listens to me, I’m just like Leonard Cohen” goes the joke from BBC’s “The Young Ones”) and has never had a legit hit, Cohen was greeted with great warmth, which he returned. He is a far more passionate performer that you might assume from his records, showing none of the disaffected cool oozing off the cover of “Death Of A Ladies Man.” He was funny and thankful, giving off many a great quotable quips throughout the night. After a twenty minute intermission, Cohen returned solo with a synthesizer, playing/reciting the magnum opus “Tower Of Song,” which is kind of like the poet’s “My Way”:

Now I bid you farewell, I don't know when I'll be back
There moving us tomorrow to that tower down the track
But you'll be hearing from me baby, long after I'm gone
I'll be speaking to you sweetly
From a window in the Tower of Song

This was hardly a farewell. Cohen packed his second set with hits and great cuts, grabbing an acoustic guitar for “Suzanne” and the brilliant “Chelsea Hotel #2,” in which he makes poetry out of oral sex with Janis Joplin and gives one of his greatest lines: “You told me again/You preferred handsome men/but for me you would make an exception.” He got vulnerable on the bossa-tingled “Lover Lover Lover” from the great New Skin For The Old Ceremony and on the grave but romantic “I’m Your Man.” By the time he got to “Hallelujah”, covered iconically by late 90’s ubermensch Jeff Buckley and the Velvet-less John Cale (as well as the Shrek-inspired Rufus Wainwright,) he was at least two hours into his show. Many left their seats after he played his most famous anthem, not realizing Leonard, approaching 80 further every second, would be back for two full encores.

When he returned to what was left of the crowd, he was full of kindness for the area of acolytes, launching into “So Long, Marianne,” his dry take on flower-power. (Is this song about Marianne Faithful?) His band got funky and Leonard brought out some dance moves on “First We Take Manhattan (Then We Take Berlin,)” finally bringing the seated, fixated crowd to their feet. By the time he walked off the stage, the intellectuals in the audience were getting up and shouting, which was not what I was expecting from the evening. Cohen’s body of work, written and recorded, speaks for itself; and though his songbook is the Iliad and Odyssey of sex, god and death, it is clearly a labor of love; his performance was the stuff of hoots and hollers, not cold and broken Hallelujahs.


JerseyBeat.com is an independently published music fanzine covering punk, alternative, ska, techno and garage music, focusing on New Jersey and the Tri-State area. For the past 25 years, the Jersey Beat music fanzine has been the authority on the latest upcoming bands and a resource for all those interested in rock and roll.


-- nobody his age is putting out albums as interesting or concerts as compelling.

nobody his age. . .?? Shouldn't it read: . . . nobody of ANY age is putting out albums as interesting or concerts as compelling.
Top

Only for Leonard, would I schlep myself back to Brooklyn, after MSG...haven't been back in more than 10 years, or so it seems...much has changed...only Leonard gets better...may he live to be 120.
A sincere Cohenhead.

There's a crack, a crack in everything, that's how the light gets in!
Top

Avi - I don't see your video from this show here in this thread - and I hope you don't mind if I post it.
It is a good one!

sturgess66 wrote:Avi - I don't see your video from this show here in this thread - and I hope you don't mind if I post it.
It is a good one!

Thanks for dotting that 'i' for me Linda!

Saw Leonard Cohen last night at the Barclays Center in Brooklyn. We had third row seats near the center, which means we were quite close to the man himself. The tickets were not cheap, but they were easily worth it.

I would have gone just for the sacred privilege of seeing Mr. Cohen, standing on stage with his acoustic guitar, singing “Famous Blue Raincoat” (for my money the greatest song ever written). But there were also many other classic songs in the line-up, including “So Long Marianne”, “Everybody Knows”, “The Future”, “In My Secret Life”, “I’m Your Man”, “If It Be Your Will”, “Anthem”, “Bird on the Wire”, “Tower of Song”, “Dance Me to the End of Love”, “Chelsea Hotel #2″, and of course “Hallelujah” and “Suzanne”, as well as a nice selection from the new album.

All around me the audience was a sea of ecstatic faces. The concert was nearly four hours long, and it felt like it was all over in a flash.

You may know that Cohen once spent five years in seclusion studying Zen Buddhism (he is an ordained Zen Buddhist monk), and it shows. He somehow manages to be calm, playful, reverent and joyful all at once. This quality seeps into not just his singing but his entire stage presence, and flows out to the audience.

But the strangest thing to me was the completely unexpected emotional effect all this had upon me. Having seen Leonard Cohen in concert before, I wouldn’t have been surprised if I had felt elated, or peaceful, or, you know, some kind of New Age-y sort of floating thing. But my reaction wasn’t like that. No, nothing like that at all.

Rather, as I watched this remarkable seventy eight year old man take us through his decades long playbook to revisit songs of emotional wisdom, my mind went to another place entirely.

I thought of people I have known — those I have tried so hard to please, and others who have been kind to me. I thought about the times I have been so desperate to be liked by the former, while taking the latter for granted. And watching this man who has so unerringly followed his own inner voice, I asked myself “what the hell was I doing?”

It’s a bit hard to put into words, but the core insight is this: Leonard Cohen, for all his veneer of graciousness, is fierce — he is a warrior. And he didn’t get that way by caring what anybody else might think, or whom he might need to please. Rather, his body of work is a commitment to asking, about hard emotional questions: “what is real, here before me?”, rather than “what would I like to be real?”

As I absorbed this insight, I felt myself reassessing my own priorities, letting go of people whose good opinions I have vainly coveted — in my mind I could feel myself walking away without a backwards glance — and shifting that energy toward cherishing those who have been truly there for me.

If that’s not a kind of enlightenment, I don’t know what is.

This entry was posted on Friday, December 21st, 2012 at 10:43 pm and is filed under Uncategorized. You can follow any responses to this entry through the RSS 2.0 feed. You can leave a response, or trackback from your own site.

If It Be Your WIll
http://www.youtube.com/watch?v=32AsJGZNugk
Top

When I think that some are critisizing the price of a place, and told stupid the MaryBee (funny kind of joke, agression against women - ha-ha ha - let say, like raping a medical student in a bus and throw her body out, in India, and she died, ha-ha-ha! - but less demanding virtually) who is stressing that other pop stars cannot achieve this with the same results - although they may be over gifted in pop music. (That does not mean that I would like to enter into olympics of the gross average or something like that.)

))) is that he does not preach, I mean, you know, all the heavy kind-of-dead stuff associated to this activity : preaching. You know.

He is la parole vivante, instead. The golden voice - did not have choice with two grand-fathers being great jewish priests, I guess... Rabbi This and That.

Like all Masters are, always deep, never heavy, and everybody seems to find exactly what it is needed at the time of listening (or reading), and it is a never ending story, a passionating work in progress, as life is.

Here are two very interesting articles on that particular wavelenght of listening. I pray G

gle not to twist things too much.

http://parolesdesjours.free.fr/cohen.pdf
***
"He can love the shape of human beings, the fine and twisted shapes of the heart. It is good to have among us such men, such balancing monsters of love."

Video uploaded by KidATiki - Thanks!