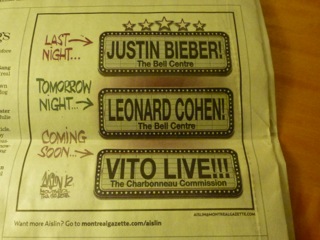 Will be on the front row to worship & enjoy.

Oh Wendy, I'm missing you much so much today!
Of course I wish you Joan of Arc in the set list, even If I turn green of envy....

Montreal+Leonard+friends..... What a special "combo"

Snowing and channel 23 is showing live from london this pm.
Joan of arc would be very much appreciated

cohenadmirer wrote:Snowing and channel 23 is showing live from london this pm.
Joan of arc would be very much appreciated

but just being here is a privalige

Leonard in his home town...one hour from now !

This has to be one of the if not The best concert I have been to...Montreal really loved having Leonard home and showed it.
Joy told us the great line from Hallelujah and then at the end of the night he also said "Its good to be home!~".
Right before the concert started security gave all of us in the front row wristbands and said if you get up to dance or stand at the front this will protect your seat if someone else sits in it. I didn't pay much attention to this but near the end for over 9 songs the front row went right up to the barrier at the stage and stood or danced! It was amazing. I didn't see behind me but it seemed like it was only the front row that could do this.
Leonard seemed happy as he was smiling a lot and spoke in French often. The Partisan and Show me the Place were magnificent.
Thank you Leonard for tonight and for all your words and songs and music over the years!
Leslie

I was blown away by his homecoming in 2008, and have been looking forward to tonight since the spring. I was expecting an awesome experience, but wasn't expecting to be blown away again. Long story short--I bought front row seats for tomorrow night when I got home. This is some show.
Top

The venue of the shows is the Bell Centre, located in downtown Montreal, a sports and entertainment center opened in 1996 and home to the Montreal Canadiens.
Capacity for concerts is 15,000
Leonard Cohen last performed in Montreal June 25, 2008

In spite of his long-undeserved reputation as the doyen of depression, Leonard Cohen is, in fact, something of a song and dance man.

Performing before 12,600 devoted fans at the Bell Centre Wednesday night, Montreal’s favourite son worked his three default moves – the crouch, the jaunty two-step and the full kneel in soulful supplication – with good-natured grace.

Watching the 78-year-old singer-songwriter and poet tucking into his formidable repertoire with such glee, it was hard to imagine anything quite as life-affirming. “I want to start smoking again when I’m 80,” he said before singing the ominous The Future.

He even made fun of his image. “Sometimes, I stumble out of bed, look at myself in the mirror and say to the mirror `Lighten up, Cohen,’” he said, drawing a hearty laugh. “How long is it going to take you to get used to the news that there ain’t no cure for love?”

With that, he eased into (what else?) a jaunty, joyous Ain’t No Cure For Love, which provided some wonderful moments for his longstanding backup singers, Sharon Robinson and the Webb Sisters, Charley and Hattie.

As one has come to expect from Cohen concerts since he got back on his own never-ending tour more than four years ago, Wednesday night’s superb performance – his first of two – was generously long, at almost three hours, and beautifully executed, with the help of an inspired band that continues to deepen the significant mark it’s been making on the Cohen oeuvre.

The boss is their biggest cheerleader, often removing his hat and standing to face a soloing musician, giving the player his full attention. He did it, for example, during guitarist Mitch Watkins’s bluesy spotlight moment during a gospel-styled rendition of the beloved Bird On the Wire. Then he turned his focus on Neil Larsen’s churchy organ playing.

The arrangements seemed designed to bring out the undervalued melody factor in Cohen’s songs, lifting the music like a blanket, far above the singer’s subterranean rumble of a voice. In that mission, the rich, tuneful playing of violinist Alexandru Bublitchi and the various stringed interventions of multi-instrumentalist Javier Mas played a crucial role.

But inevitably, the songs remain the star of the show. A stirring Who By Fire, the brilliant blues rocker Darkness, the reassuring Anthem, a deliriously-received Tower of Song, a hushed and mesmerizing Suzanne, the ominous Waiting For the Miracle and a simply gorgeous Show Me the Place were among highlights too numerous to single out.

The audience received all these treasures like the dearest of old friends, erupting into spontaneous cheers at lines like “I’ve told the truth, I didn’t come to fool you,” from Hallelujah, “I was born with the gift of a golden voice,” from Tower of Song, and Cohen’s self-description as a “lazy bastard living in a suit” in Going Home.

Shockingly, even the sound in the Bell Centre was excellent – crisper and more defined than it was at Salle Wilfrid Pelletier of Place des Arts when Cohen last performed in his hometown in 2008.

“Well, friends, we’re pushing up right against the curfew,” Cohen said at 11:30, before finishing off another triumphant homecoming show with Closing Time.

“It’s hell to pay when the fiddler stops,” Cohen sang. May that never happen.

13. Tower of Song
14. Suzanne
15. Waiting For the Miracle
16. Show Me the Place
17. Heart With No Companion
18. The Partisan
19. Alexandra Leaving (recitation, followed by Sharon Robinson solo performance of the song)
20. I’m Your Man
21. Hallelujah
22. Take This Waltz

23. So Long Marianne
24. Going Home
25. First We Take Manhattan
26. Famous Blue Raincoat
27. If It Be Your Will (recitation, followed by Webb Sisters performance of the song)
28. Closing Time

GOOGLE TRANSLATION (link to original article in French above)

MONTREAL - It is with a standing ovation that began the first performance of the tour "Old ideas" Leonard Cohen at the Bell Centre on Wednesday night.

The great Leonard Cohen had just walked the stage as the crowd gathered for the event was on his feet. Question not to stretch this heartfelt homage, the poet of 78 years and nine musicians began the first notes of the song "Dance Me to the End of Love."

In a sober, composed solely of a curtain backstage, who garnered rave reviews since the beginning of this new adventure world, launched in August, immediately charmed the crowd with his deep beautiful voice.

"Thank you for your warm welcome. I am very grateful, he said in French. I do not know when we'll see, but I promise you that tonight we'll give everything we have. "

The show, which bears the name of her 12th album, offers a near perfect musical balance. Surprisingly, the star of the evening has never been eclipsed by his imposing group, even if they left a lot of space.

With two giant screens on each side of the stage, the audience could even see the singer nodded, eyes closed, when its musicians were guitar solos and violin on "Bird on the Wire" or "Who by Fire"