Super-excited about the show tomorrow!
The venue is HP Pavilion, aka The Shark Tank (for Sharks hockey team) 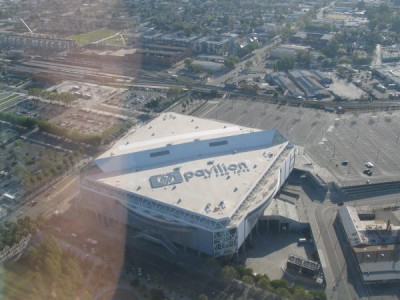 Leonard "knows this room" - he was here around the same time in 2009. Let's relive the memories, shall we? Ringing out the room. Drum tech Bennie Johl and stage manager Paul Stratford have a laugh with
Prince of Precision Rafael Gayol before the start of the set in San Jose.

Leonard Cohen at the HP Pavilion in San Jose

The one and only Leonard Cohen played the HP Pavilion in San Jose.

The revered performer delivered the very first lyric of the evening upon bended knees, dropping down low to sing one of the most exquisite opening lines of any song in the entire pop music canon: "Dance me to your beauty with a burning violin."

And it surely made the crowd want to return the gesture -- to kneel down in recognition and honor of one of the finest songwriters in history.

The 78-year-old Canadian troubadour, who is more energetic onstage than most performers half his age, certainly lived up to his legend on Wednesday at the HP Pavilion in San Jose. Cohen's two-set, three-hour show was entirely marvelous -- from the smoldering beauty of an opener, "Dance Me to the End of Love," on through to the eventual closer, a fun, faithful cover of the Drifters' classic "Save the Last Dance for Me."

The crowd greeted each of the roughly two dozen selections with gusto, reserving a little extra energy, of course, for the "best of" material. Some 6,000 people attended the show, basically filling the lower sections to capacity, but it sure felt like a bigger audience as Cohen uncurled such fan favorites as "Tower of Song," "Who By Fire" and "Democracy." The devotees acted like there was no place else on earth that they'd rather be.

If you saw Cohen's equally enjoyable 2008-10 tour, which touched down on three separate occasions in the Bay Area, then you have a pretty good idea of Wednesday's play list. The star gave the fans what they wanted -- i.e., the cream of the crop -- but due to the depth and breadth of Cohen's songbook, it wasn't surprising to hear fans later grumbling about what was left off the set list. (I'll grumble a bit myself and say that I wish he'd played "Ain't No Cure for Love," "Boogie Street," "Closing Time" and, especially, "If It Be Your Will.")

Yet, that's kind of like complaining that the sprinkles were left off a five-scoop, hot chocolate sundae with nuts and whipped cream. The show was, without question, an embarrassment of songwriting riches.

I could fill this entire review with gushing comments about Cohen's lyrics -- and still have enough left over to write a book. Seemingly every line of his is worth dissecting, knowing full well that you'll probably get something new each time you study his words. If you don't get something out of a Leonard Cohen song — any Leonard Cohen song — then you probably aren't listening hard enough.

The biggest difference between what we witnessed on Wednesday and on Cohen's previous tour was the inclusion of new material. Cohen is currently touring in support of his 12th studio album, "Old Ideas" (released in January), and he included a healthy handful of the fresh tunes. They weren't what the crowd was hoping to hear, but they were still mighty impressive — especially the clever cut "Anyhow," which really held up next to the classics.

Cohen was equally poetic and powerful -- a nearly unbeatable combination -- as he unleashed his canyon-deep voice and led his superb band on one diversely appealing gem after another. He was mesmerizing on "The Future," heartbreaking on "Bird on the Wire," transcendent on "In My Secret Life" and downright humorous on "Tower of Song."

The highlight of the night, amid very stiff competition, was probably "Hallelujah," which brought the house down like no other. That tune has become one of the most popular songs to cover in recent years, and the renditions have ranged from peculiar (Bon Jovi) to poignant (k.d. lang). Yet -- with due respect to the version delivered by the late Jeff Buckley -- nobody handles "Hallelujah" better than the man who wrote it.

Hallelujah, indeed. What a night. And the best news is that we might get another Cohen date in the near future.

"I suppose we will meet again sometime," the singer announced from the stage. "I hope to stay on the road another couple of years."

Very cool Show. It went faster than the Austin and l.a. Shows.

And they played my favorite song to hear live:
"Sisters of Mercy"
Top

Denver was the best, people were completely into him, not like in LA, half of that crowd should have stayed at home, and Leonard knew it too. He did not sing all the songs in LA either.
Top

Does anyone have the set list for San Jose?

Some video - not up close - but the audio is there

Coming Back to You
(As noted in the description - it "almost" the whole song - recorded before memory ran out.)
https://www.youtube.com/watch?v=HGPNF-vFkZE
Top

Wow, that was quick of you to find it already!

It's surprising that you can't zoom video in on the iPhone, but I was really trying to capture the audio anyways. I've also uploaded Anyhow, and Democracy, and will upload Come Healing soon. I have parts of Anthem, and In My Secret Life, but they don't seem necessary.
Democracy: http://youtu.be/DXm8lWLzei0
Anyhow: http://youtu.be/wGPZr74zXsg

I saw him three times in the last tour, so I thought I knew what to expect. I missed Dino Soldo, but enjoyed the addition of the violin. The inclusion of which made the band sound more intimate, less grandiose?

Democracy was an incredible surprise with the Jew's harp. It became less anthem like, and more rollicking country, which was so much fun, and in a way refreshing.
Anyhow includes new verses! Which cracked my neighbour up, as you might hear in the video.
The Webb sisters were certainly sublime, and Coming Back to You was such a gift. I much preferred Sharon Robinson's showpiece being Boogie Street, however.

Our concert started 15 minutes late, which meant that we didn't get a couple of the encores; no For Your Smile, or Closing Time.

I wonder...will we ever see the Webb sisters and Leonard doing Joan of Arc?
Top

Good audience. Didn't get really spirited until 2nd half, mostly during I'm Your Man.
We got Anyhow AND Save the Last Dance. Bliss! Sisters of Mercy too.
I missed hearing the Partisan though. Thought I would miss Closing Time but I really didn't mind... I was more worried he wouldn't do Save the Last Dance!
Bird on a Wire was perfection, as were all the "usual" songs. Standing ovation for Hallelujah, and semi-standing ovation for a few others. First We Take Manhattan ROCKED with the new lighting. I have never understood how people can stay seated during that song.
Sharon Robinson blew me away with Alexandra Leaving. She is absolutely amazing. I thought I wouldn't care for Webb's coming Back to You (I had watched it on YouTube and I guess I wasn't really open to it - disappointed that Leonard was not singing it) but it was actually very beautiful live.
Leonard was not too talkative...the show started 15 mins late and I think he was trying to squeeze as many songs in as possible? He did say early in the show that he wanted to tour for another "couple of years"

because he wanted to start smoking again. He did the usual banter with Tower of Song and the blessings at the end of the show. There was something else he said that was funny and new/different but I can't remember what it was! He transitioned VERY quickly between songs. Seems like there were more introductions of the band. Not as excessive as in 2008 but more than 2009-2010.
Nice merchandise available. I got a program - the "centerfold" - oh my!! (but I read it for the articles...hehe)

Baldwyn is right - Leonard is awesome on the Jew's harp. I love the new sound in Democracy. Heart with No Companion was a treat too.

Here's Come Healing, by the way. I was so surprised to find the Webb sisters didn't do the song on the album, I thought I'd record it to compare.
http://youtu.be/dDshlS18FPw

Why on earth does the audience not sing the chorus to Hallelujah?
Top

Thanks for the videos Baldwyn. I have wondered that too about US audiences, and Hallelujah.
For the record, I wouldn't mind seeing your partial video of In My Secret Life, especially if it includes the "wisdom of old" part. Seems like Leonard held that ooooooold note longer than I have ever heard him. His voice sounds better than ever.

You got it! It's actually almost complete

He seems to be very precise about enunciating things in this song.
http://youtu.be/ztRM2mUt10w
Top

San Jose surpassed my expectations, it was wonderful. Leonard though he didn't speak much was in great form
And his voice sounded great. The audience was respectful yet enthusiastic and as Esther said especially during
I'm Your Man, lots of whooping and hollering! Also Anyhow live is a real treat, he is really playful with it.

I saw Leonard and the new band in Verona and was disappointed. I was really surprised at the difference in feel
Of the band. It seemed to lack so much vitality without Dino. The right side of the stage was so lackluster.
But to be fair I didn't think the show itself was very good. leoanard seemed tired and was flubbing lines and the
Rest of the band was subdued.

Leonard was flawless in his performance last night and the band seemed more close knit and very lively. As for the change
In instrument I did at times miss Dino but I do enjoy the violin in most songs. I think Baldwyn described the feeling
That the band emits as being more intimate and less grandiose. I had to put aside my thoughts of the last tour's shows
And sit back and enjoy last night's show for what it was a wonderful display of Leonard and his songs backed up with a
Fitting band and wonderful backing singers!