Everything about the North American leg of the World Tour!
Post Reply
15 posts • Page 1 of 1

Now, I know the coming tour is being organised one leg at a time and we here in Australia and New Zealand need to have the patience of Job (or perhaps Finns)

But while we are waiting I thought the following photos would be a gentle reminder to the tour organisers that so many people down under want Leonard to come back again.....please! Just look at all these venues filled to capacity! And now for the outside venues: Also not forgetting our Kiwi cousins across the pond: Looking again at these concerts through Leonard’s eyes gives us a unique perspective on what he sees of us instead of what we see of him. Also they are a pleasant reminder of what was and could hopefully be again. Of course nothing in life is certain and we will wait to see what the universe decrees. But for now, Leonard just know that our arms are indeed open very wide!
It doesn't have to be perfect, it just has to B4real ~ me
Attitude is a self-fulfilling prophecy ~ me ...... The magic of art is the truth of its lies ~ me ...... Only left-handers are in their right mind!
Top

We are singing from the same page of the Cohenite song book.

Now that Madonna and Glen Campbell have announced that for various reasons they will not tour Australia and New Zealand, there must be some free dates at concert venues for AEG, Leonard Cohen and UHTC to exploit for the Old Ideas tour.

Don't forget the Leconfield concert - Australia Day, January 26th, 2009. I even gave up the opportunity to go to a cricket match to go to that concert! (Anyway Australia lost, so I was at the better place in more ways than one).

I didn't forget the Leconfield concert but I couldn't find an audience photo. The same applies for Swan Valley, Sandalford Wines 2009 as well. I searched high and low for audience photos for both of them and couldn't find any so if you find some please add to the collection.
EDIT: Just a thought; maybe Greg Ross has one for Swan Valley, WA. Wherever you are Greg, if possible that would complete the picture - so to speak

AlanM wrote:Hi Bev,
We are singing from the same page of the Cohenite song book.
Alan

....and interesting info about those free dates.....

Shame the Aussies lost the cricket but you did indeed make the right choice!

This is the only audience photo I have.
It was taken between Augie March and Paul Kelly.
i.e. just under 2 hours before LC took the stage.

Addendum:
The photo was taken with my back on the security fence. When I checked at interval the open space was occupied all the way back to that fence and down both sides too.

The 2009 Valleys/Wineyards pictures are just incredible too.

My pleasure to show you and the world an LC part of my country.

It is a land of many different and interesting places and faces!
Let's hope we do get to go to similar concerts again!
It doesn't have to be perfect, it just has to B4real ~ me
Attitude is a self-fulfilling prophecy ~ me ...... The magic of art is the truth of its lies ~ me ...... Only left-handers are in their right mind!
Top

B4real wrote:Let's hope we do get to go to similar concerts again!

I don't think there can be any real doubt of that Bev. It must just be a case of "when" rather than "if".

AlanM wrote:This is the only audience photo I have.
It was taken between Augie March and Paul Kelly.
i.e. just under 2 hours before LC took the stage.

Here's the best "audience" shot I took at Leconfield ... I was pretty close to the front, so it really only shows a couple of rows of what was a massive audience.

). For some reason the organisers built the stage so that LC and the band were looking straight into the baking afternoon sun; hence the plentiful sunglasses and the sheen of sweat everyone is wearing.

Dean (from Adelaide)
(For most of November 2010, I followed Leonard and the band as they toured around Australia and New Zealand. You can read about my wanderings on the blog I created to collect them all in one place: http://lcdownunder2010.wordpress.com/)
Top

dce wrote: For some reason the organisers built the stage so that LC and the band were looking straight into the baking afternoon sun; hence the plentiful sunglasses and the sheen of sweat everyone is wearing.

My guess is that it had something to do with "the lie of the land". If the stage was at the top of the slope facing east, all the audience would have been craning their necks looking up at the performers for the complete show.
Also, if you remember, they brought LC and UHTC on 10 minutes earlier than advertised. I reckon that they did that so that the sun was crossing the horizon during interval, thus reducing the occular discomfort for Leonard and the band. In the second part of the show and during the encores there were no sun glare problems.

Thanks Dean for that great photo. You must have had a wonderful view of the stage!
I still can’t find a good audience photo of Sandalford Wines, Swan Valley WA in 2009 but here’s an aerial concert view of the place and a couple of photos Greg took of LC and the band. It’s interesting to note that in the last one they are also wearing sunglasses here as well! Jarkko says no Aus /NZ tour in Feb 2013 - but Leonard went to the Antipodes in October of 2010 ! February would suit me better , but I wonder if October 2013 might give me an excuse to visit my old friend Dave again in New Zealand ! Maybe fit in an Australian concert as well. I will be keeping my fingers crossed - hope to see you all there
Steve
Top

Visit "down under" to Christchurch

Leonard ... here is a challenge for you! You have a huge following in New Zealand and definitely in Christchurch. Most entertainers are avoiding us since the earthquake .. please come and see us again. What better way to liven the souls of our people here.

A home cooked meal will be thrown in!

Seriously, do you have plans for a tour to New Zealand?

That's a wonderful pic Roman, I hadn't seen it before!

Here's a couple more Aussie "audience" ones with a different outlook.
I love these photos - the feeling of expectation and what the solitary figure of LC could be thinking!
There's no one watching but we are still waiting. 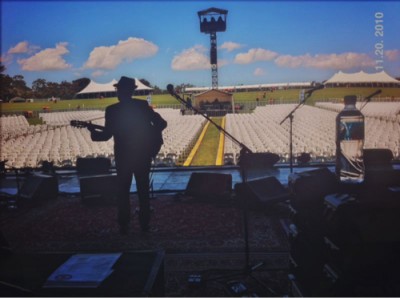 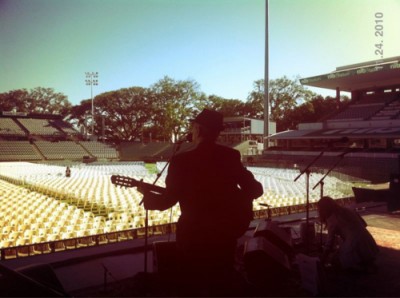 ....and LC in the Aussie bush framed between two gum trees! 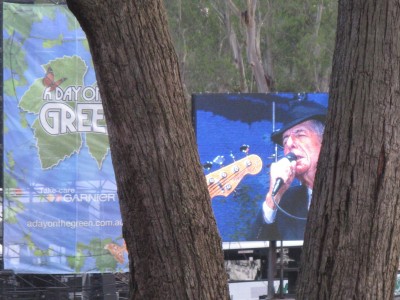