Everything about the North American leg of the World Tour!
Post Reply
172 posts

Now..MSG...check out the New Barclays?, or Wang on a Sat night? Such a nice place. Looks like there's room to add another night in Boston too.

Any mention of ticket pricing?
Top

musicmania wrote:Anyone who has ever ordered from Evenko, I'd appreciate any tips please

You should practice buying tickets for a concert currently on sale at the Bell Centre. Assuming their process hasn't changed in the last year, the Evenko site operates very differently from the Ticketmaster site. Just before the concerts first go on sale, you are placed in a virtual waiting room. When the sale starts, you are randomly drawn out of the waiting room and given a chance to buy tickets. You can reject your ticket allocations twice if you don't like what is being offered to you (i.e. you are given 3 chances before you are sent back into the waiting room, at which point you have to wait until you are randomly drawn out again). Evenko does not allow you to keep a permanent account, but you can provide your personal details while in the waiting room in the minutes before the tickets actually go on sale.

Thanks for the tips! Virtual waiting room means it is all down to luck.

If VIP guaranteed near the front for Montreal at a reasonable price I'd consider it rather than try and navigate Evenko. Hope we have the info before the presales.
2009 Dublin 2010 Lissadell Katowice LV x2 2012 Ghent x2 Dublin x4 Montreal x2 Toronto x2 2013 New York x2 Brussels Dublin x2

scocoh wrote:Any possibility another Montreal show will be added as was done in Dublin? Seems like there is room for another.

lizzytysh wrote:OMGosh!
Which ones are via Evenko?
[I know, I know, just read... right?]

what is the process for ordering pre-sale tickets without having a code number? do we just call ticketmaster on May 11th and tell them we are part of group B?
Top

what is the process for ordering pre-sale tickets without having a code number? do we just call ticketmaster on May 11th and tell them we are part of group B?

Presale tickets can only be purchased on-line. Presales for the May 11 begin at 10 am local time (local time = 10 am at the location of the venue). Show up on the Forum several minutes before the presale is to begin. Go to the main Old Ideas Tour thread:

In the announcement section there will be a thread for each venue's presale. Open the thread for the venue(s) you are interest in. At the time the presale begins and no sooner, a password and link will appear. Use the link to go to the ticket seller's site. Enter the password. You will be able to buy your tickets then.
Marie
Speaking Cohen
Top 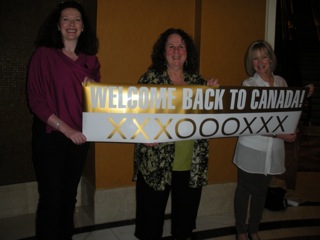 Welcome Back to Canada Leonard and the Band...
('Irish Mar' - Marie, myself Leslie PY 'Mutti' and 'Imaginary Friend' Sheila).
Leslie

mutti wrote:
DSCN5684.jpg
Welcome Back to Canada Leonard and the Band...
Leslie

scocoh wrote:
The Montreal venue schedule is open to the possibility...

Wonderful news, thank you Jarkko, Marie et al. I will definitely do Montreal and Ottawa - although I'm disappointed to see that he will play ScotiaBank Place in Ottawa (a hockey arena in the middle of nowhere). The NAC is a far better venue. But of course I'm thrilled LC is coming back to us us here and I'll be happy to go, arena or not!
Toronto June 6 2008; Ottawa May 25 & 26 2009; Las Vegas 11 December 2010; Montreal 2012; Ottawa 2012; Kingston 2012.
Top

Steve Wilcox wrote:I'm a little out of practise for pre-sales (since 2008!), but will they each still have a password and will that be something Jarkko will release just moments before? I see no mention of that anywhere. Thanks.

If the pre-sales work in the same way as for the 2012 European dates, there will be no passwords but Jarkko will post a link to the ticket seller just as the tickets go on sale.

IS this the way it will work jarkko?