Petri Kuivalainen reported that Spotify has a live bootleg, recorded in Gothenburg
in Sweden during The 1993 Future Tour.

Make a search for A Poet in Gothenburg to find it. Nine songs in pretty good technical quality (copied from a local radio station)

Amazon UK also lists it (only for MP3 download). 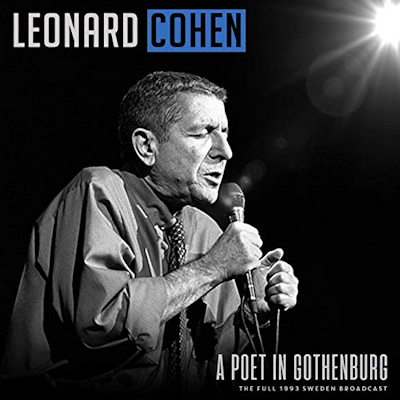 It's also been on YouTube complete since 20 Dec 2019 - https://www.youtube.com/playlist?list=O ... GWUDmaisQA

....but there's no guarantee it will stay there

Even so, it is listed on subscriber channel Leonard Cohen under albums - https://www.youtube.com/channel/UCi25ui ... C1eyPP1DAQ
It doesn't have to be perfect, it just has to B4real ~ me
Attitude is a self-fulfilling prophecy ~ me ...... The magic of art is the truth of its lies ~ me ...... Only left-handers are in their right mind!
Top

I was browsing Spotify yesterday. And I saw there are a lot of other bootlegs listed under the Leonard Cohen artist page as well. Some are actually the same recordings, but different releases:
Jarkko, do you happen to have any idea why these recordings are up on Spotify? And listed among the other offical LC releases on the LC artist page?

Well I'm obviously under a rock because I only discovered these today. I listen to most of my music on Spotify these days, but since I've all Leonard's albums saved, I didn't have to go to his artist page. I only did so today because I was too lazy to scroll down to Thanks For The Dance, and knew it would be at the top of the artist page &#x1f923;
2009 Dublin 2010 Lissadell Katowice LV x2 2012 Ghent x2 Dublin x4 Montreal x2 Toronto x2 2013 New York x2 Brussels Dublin x2