A Moment in Berlin, the Light Blazing

Concert reports, set lists, reviews, photos and You Tube links. Fan meet-ups before and after the concerts.
Post Reply
2 posts • Page 1 of 1

A Moment in Berlin, the Light Blazing

What a concert, what a very special night.
I thought it deserved a revisit.

For you see the Berlin concert was held in the open air Waldbuhne Stadium, once a potent symbol of the Nazis.
Hitler had it built for the 1936 Olympics, later, he had a private box there. As you walk towards the stadium, the imposing concrete menace of Nazi architecture stands over you, then you enter the arena walking down 90 or so stairs.

We (Ann and I) were very lucky with middle seats in Row 3, amongst many friends, Cohen fans from around the world. One young woman touched my arm and said, “ God, I can’t believe I made it in here. My heart was pounding, tears were running down my cheeks, I couldn’t breath, but I’m here!” From Israel, she had lost many of her family during the Nazi era and this journey was still terrifying. We drank to a better world and sacrifices made.

There were many moments, but one still fills me with awe and makes my eyes glisten even as I write this a month on. There he was a little, elderly, Jewish gnome, singing “First we take Manhattan, then we take Berlin,” in the very heart of Nazi territory. Even better, by the time he got to the second chorus, 25,000 Germans (and a sprinkling of interlopers, such as me), were on their feet, singing … “Then we take Berlin!” The significance was lost on no one. Every time the band reached the chorus line, Cohen, with a huge grin, would remove his hat, stop singing and let the audience go. As he wrote so many years ago … “there’s a crack in everything, that’s how the light gets in.” 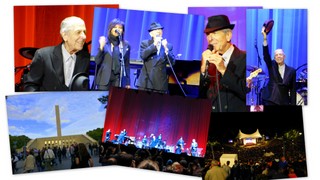 AW: A Moment in Berlin, the Light Blazing