Saturday's performance was simply wonderful - In my top three, along with the Manchester Opera House, 2008 and London, Royal Albert Hall, 1988 (Front row, centre).

I'm not one for evesdropping on other people's conversations, but it was difficult not to overhear some of the conversation between the gentleman seated behind us and his companion, before the concert and during the interval. I won't give any details of what we heard, but I will say that it seems that Leonard Cohen fans could be in for some interesting treats in the future.
The guy sitting behind us was Robert Kory .....

Some downsized photo's from the encores are attached, below 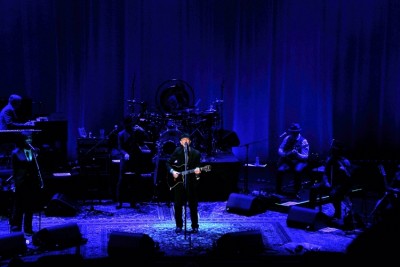 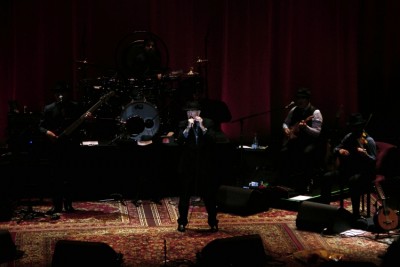 Thank you from a long-time 'lurker'

Overdue and heartfelt thanks to:

Jarkko and all the moderators – your hard work makes this forum, informative, easy to navigate and a pleasure to read
Forum members – your words, pictures and videos are always entertaining, generous and uplifting

Because of all of you, my partner and I (he’s a fan too!) have seen Leonard in concert three times over recent years

Lyon – an open air concert in an ancient Roman amphitheatre on a warm summer night –unforgettable
Cardiff - my home town - so kind of Leonard to come to me after I had been to see him!
Paris, 29th Sept 2012 - almost four hours of Leonard and the band followed by a walk through Paris under a full moon – magic.

Leonard released his first album when I was a teenager and I’ve been a fan ever since. I know that if he chooses to tour again (and who knows after the intriguing previous post!), I’ll hear about it first on this wonderful forum.

Thank you all
Top

Back a few days ago from an incredible vacation in La Ville Lumiere.
The concert was a highlight right in its middle, and even after 10 days, I'm still not sure I have the right words to describe it.
The smile I flash at people who ask me kinda did the job so far...

. It was my first LC concert in such a small venue and I was captivated by the experience. (my first concert was with 47,999 other people in Tel Aviv.. and yes, it's still at top pf my list, even after being blown away by Paris)

The welcome was roaring warm, standing ovations a plenty, sound pristine and LC and band in high spirits.
Olympia, being an Old World venue, has no screens but also not stage barriers. First rowers were sitting literally at LC's and Javier's feet. 7th row was close enough to feel like 3rd and far enough to give a wide angle stage-view.
Barriers were absent in physical and metaphysical sense: with the venue being so petite, emotions poured from the stage right onto the audience, circling the venue and resonating right back to the stage. And it showed on faces both on and off stage for those magical 3 hours and 40 something minutes.

With encores, the masses fled to the stage. Being on the short side, I again politely asked the taller peeps in front of me if they don't mind letting me through so I can see something. And again they generously agreed. So I found myself standing at the foot of the 3 steps leading to stage, less than half a meter from Javier, soaking the experience from the most unique angle (albeit a bit squooshed.. )

We were not sure till last minute how long encores would be - concert started late due to political rallies putting the city under nightmare of a traffic blockade and it was almost 11PM.. I'm an avid optimist, but there was a second I thought "Closing Time" is going to be it. After taking numerous vids in Berlin, I decided none in this one (besides, the pro duo Maarten and Albert were in the house..), but when I Tried to Leave You's first accords were played, at my standpoint, I couldn't resist it, pulled my iPhone out of my jeans' pocket and pressed the button..

So here it is - an awesome number, with most energetic crowd behind me, Rafael blowing a kiss a tout le monde, missing catching his drumstick, only to be saved by Roscoe.. Hope you enjoy it too:

(Those who might ask where's 'Save The Last Dance For Me' and UHTC's lil' dance shenanigan that followed - the woman next to me accidentally knocked my hand off 90 seconds into it... bummer doesn't even begin to describe it.. )

Roll on break and North American leg.
It was great meeting many friends and if all goes according to plan, I'll see some of you guys in NY.

I've just watched your video. It is amazing. The closeness you described so vividly is felt in the video; it is really as if they were in your living room, as you describe. Thanks for the story and the movie.
"climb on your tears and be silent, like the rose on its ladder of thorn."
Paris 07/07/09, Tel-Aviv 24/09/09, Salzburg 27/07/10
Top

Video uploaded by zodkavombie (Victorine)? - Thanks!

A big thank you to all those who have posted video links on this thread. I for one have watched them all at least once and over time will watch them many, many more times to come. They are magnifique

More good video from Wirebirds - Thanks!

Bird On The Wire
http://www.youtube.com/watch?v=KJzqQ0zdQro

Waiting For The Miracle
http://www.youtube.com/watch?v=uMYF1iiRWMs

Save The Last Dance For Me (posted earlier - includes the "chorus lines)
http://www.youtube.com/watch?v=E2b84JA_XrA
Top

Thank you Linda for your work finding these videos from wirebirds.

They definitely make you feel the excitement of 'being there'.

Video uploaded by andredi19 - Thanks!

sharon.e wrote: ... Those of you who were lucky enough to catch concerts in small venues know what I'm talking about it feeling like an incredibly intimate concert -- like "an evening with LC and friends"

. It was my first LC concert in such a small venue and I was captivated by the experience...

Thank you, Sharon for your wonderful concert report. Allan Showalter aka Dr HGuy, featured your Paris concert report and video yesterday and I can't describe it any better. So here is the link.
http://1heckofaguy.com/2012/10/09/the-c ... t-30-2012/

Paris and Lisboa were for me the best concerts I saw in Europe.
Having afforded only one in Paris, I chose the last, so was heartened to hear some say that it was the best of those three.

Interesting perspectives of that concert world, as I stood outside on the first night.

More later... and still taking everything in emotionally.
All of this was such an incredible set of experiences for me.

Sitting here at work on a gloomy drizzly day, that wonderful Sunday in Paris seems almost unreal. Not a cloud in the sky all day and then a dream of a concert in the evening. And what a perfect venue - warm and intimate - how LC's music should be experienced. No walking around, talking etc. during the show - the audience was completely immersed in what they were there for. And what a fabulous show - LC - and the band - could have been forgiven if they'd been feeling the pace after three nights in the row, on top of intensive schedule of concerts and travel over the last couple of months - but not a bit of it. Running, kneeling (no creaks and groans when he was getting up again!) and singing for almost four hours - at 78. Hope they all take the opportunity to have a good rest over the next couple of weeks or so.

Whilst I don't watch many of the videos which are posted, the ones of the concert we attended are special so thank you to Albert, Wirebirds and SharonE for providing some lovely memories. And thank you Maarten for the photographs. (I have to agree with StBruno - generally not keen on LCD screens interfering with the view, but there have to be one or two exceptions!)

So, just to reiterate what everyone else here has been saying - you're in for a sublime experience over there in Canada and the States. (I'm running out of superlatives!) And, who knows, you might even get to hear Joan of Arc

Famous Blue Raincoat and If It Be Your Will
http://www.youtube.com/watch?v=DFG0fSb1hek

Two performances that manage to get some members of the audience excited !

Rafael works with his kit...

The Webb sisters create a stir...