The venue for these concerts, following the switch from outdoors shows at the Hop Farm, will be Wembley Arena in North London. Most UK forum members will be familiar with the arena but maybe not those from outside the UK. The arena is an indoor venue adjacent to, and not to be confused with, the famous football stadium of the same name. 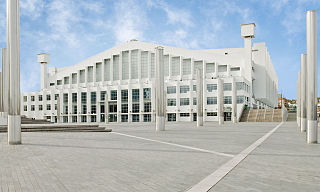 The historic arena was built in 1934 for the British Empire Games and originally featured a swimming pool. As a result, the venue was known for many years as the Empire Pool. The pool was last used for the 1948 Olympics but the arena has retained its Olympics connections and was used as a venue for London 2012.

As the Empire Pool and latterly the Wembley Arena, the venue has played host to many famous gigs over the years, most notably the New Musical Express Poll Winners concerts in the mid 60s. I can remember going to these concerts as a teenager. I never saw the Beatles perform live but I did get to see the Stones, and many other big names, at an NME concert. The venue was refurbished in 2006 and now seats 12,500. 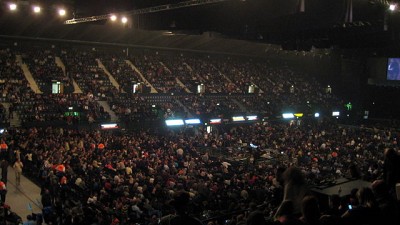 The last time I went to Wembley Arena was 1992 to see Bruce Springsteen. The sound was truly awful back then so it will be interesting to see what, if anything, they've done to improve the sound since the refurbishment. Of course, if anyone can get the arena to sound sweet it will be Leonard's sound crew.

Thanks Wendy. I'm sure all UK fans are aware of the difference, but I was assuming it was the same Wembley soccer stadium. Interesting history. I am sure LC's sound crew will create a beautiful evening. They are the best! Enjoy!!
Top tends to be lots of echo Show start has been pushed to 8pm to accommodate ticket exchanges. Presently still about a thousand people queued at the ticket windows.

I thought this was just fantastic concert, band now really gelling and Mr Cohen in great voice and seemed to be really enjoying it, started at 8 and had to end at 11.30.

A very full apology from him about the change of venue was a notable thing at the start.

What a amazing show! It started 30 mins late because of the massive queue of people outside still trying to get their tickets (Wembley Arena couldn't organise a p**s up in a brewery) but the curfew was pushed back to 11.30 pm to make up so we didn't lose out.

The atmosphere was tremendous - there was lots of love in the air and you could tell that Leonard could feel it. He apologised early on in the show for the inconvenience we'd been put to and later on, he introduced the Webb Sisters with "from Kent, England, where we should have been tonight". I need to get my brain in gear to remember the full set list but sets 1 & 2 were largely as expected but with the unexpected re-appearance of I Can't Forget in the first set. I couldn't catch everything Leonard said at the end of I Can't Forget but it started I used to live in London. The encores were cut back to just 4:

So Long Marianne was one of those where the audience took over the choruses & Leonard just listened.

Thank you Wendy for this review!

A wonderful gig with Leonard performing his heart and soul out.

The apology was interesting with him saying he only found out about the change as we did. He made a veiled remark about the dark side of business and how he never 'gets to shake or crush the hands' of those behind it. He did seem quite angry on our behalf.

The band were playing brilliantly and the sound was perfect. Highlights for me were a great I'm Your Man and new songs from Old Ideas.

Only slight irritation was on the encores when an obviously drunk pair of girls pushed to the front and started singing along badly and out of tune. Fair enough during Marianne but it carried on during Famous Blue Raincoat and killed the spell that song normally casts.

But apart from that a great gig and I'm so glad it was rearranged.

Thank you for a unforgettable night.
Top

Thanks for the prompt reviews.... I've been waiting anxiously! Sounds as if it was a great evening.

joyezekiel wrote:Thanks for the prompt reviews.... I've been waiting anxiously! Sounds as if it was a great evening.

I would like to add my thanks too. It is delightful to read all the prompt reviews from actual concert goers.

After all the trials and tribulations of getting tickets changed and whatever. It came to me that the real advantage to changing the venue (not counting weather conditions) is the fact that I will be watching the concert tonight without people getting in my way to-ing and fro-ing with burgers and beer while Leonard was on stage which was what happened at Weybridge. These people that could not sit for a concert without the urge to eat and drink, spoilt it for me almost as much as the rain did. So tonight I look forward to an evening with Leonard without interruption.
Somebody must have died for you
A Thousand Kisses Deep

Had to skip the encores in order to catch the last train but glad I did not miss too much.
Top

A great evening, all the band were fantastic. Ironically it was extremely hot and for once an outdoor venue in the UK would have been ok!

Unfortunately, as meglos2000 mentioned, during some of the later songs and for all of the encores, it was difficult to hear Leonard singing above the shouting and out of tune singing of one, seemingly drunk, girl right in front of us. She was very difficult to ignore. However, we were so lucky to have such good seats because of this forum, so thank you to all the people who put in the work to run this site.