Everything about the European leg of the World Tour!
Post Reply
40 posts

There seems to be one or two venues that appear for the moment to have fair pricing structures but I have seen a post (and can confirm)that says that at the Olympia Paris the prices range from €100,50 to €199,50

And in early July in Paris-Bercy, Bruce Springsteen tickets range from €68 to 99,90 €. and before anyone says about LC and 3 hours and size of the band, then all I can say is that at the last gig we were at, Springsteen played for over 3 hours and had a larger band.

I have very mixed thoughts on this, I really do. Many fans in France who would really like to go and see him, will not be able to afford it. Not all fans can boast of the number of times they are going to fly here and there and book hotels near the venue to follow their idol.

A friend of our Daughter has just said that from early this morning when she told him of the 3 dates at Olympia, he has gone from elated to deeply deflated. He simply cannot afford such prices. Seems now we might be hearing people say, "well you can't be a real fan if you won't stump up for expensive tickets to see him". All I can say to them is, is it right to price out young fans who are struggling to keep their heads above water, is it right that any fan of long standing should have to miss probably the last chance of seeing the one person they have followed for ever and a day?

Sure there are economics involved but when someone as huge as Springsteen can play for that kind of ticket price, then I wonder not so much about L.C himself but of his management (who incidentally after the fiasco of 2010 cancellations and the unnecessary costs involved for some people I have no time for them whatsoever) who seem to be having one last hurrah at fans expense and that I do NOT like one little bit.

The OH and I will attend a concert hopefully in Barca but my gripe is not for myself but for the large number of genuine fans who are going to be priced out of seeing him. I won't stop admiring L.C for what he has meant to me but I will admit, he may well go down a notch if these kind of ticket prices appear elsewhere on the tour.
I guess it all started for me sometime around Christmas 1967 and now, goodness me, it's.........2018 and over fifty years later.
No one ever listens to me. I might as well be a Leonard Cohen record.
Neil from The Young Ones
Top

Have to agree with you here. I am very disappointed and shocked at how high these prices are. I was expecting them to be higher than the bigger venues but not this high.
2009 Dublin 2010 Lissadell Katowice LV x2 2012 Ghent x2 Dublin x4 Montreal x2 Toronto x2 2013 New York x2 Brussels Dublin x2

Totally over the top! I would only pay 199.00 euros as a last resort. Pity...cause Paris seemed the best option. Let's hope that U.K. dates are announced before the European tickets go on sale.
Top

I have been to the Olympia in '08. It is indeed a small venue and I think seats in 2nd or 3rd category would still be very good.

If you go to their website and go through the exercise of buying a ticket for another show you will be able to see the layout. Hope this helps you.

And yes indeed, good luck with the booking(s) !

I have been to the Olympia once, to see Katie Melua. I sat only a few rows from the stage, but would agree that almost anywhere in the concert hall is likely to offer a great listening experience. Of course, if you feel you can afford it, it is usually a little bit nicer to be close to the performers. The interior of the hall is remarkably simple (not at all ornate) for such a famous and historical venue. Edith Piaf gave many performances here. Also, Diana Krall has an excellent DVD (Live in Paris), which was filmed here.

The ticket prices are indeed very steep, though comparable to the prices paid for the best seats at most North American concerts during the last tour. I guess this probably means that the ticket prices will remain similarly priced for future shows in Canada/USA.
Top

Also, could you tell me if the floor is sloped or flat at the Olympia?
blithe, urbane and inebriated.
Top

Well, I can't remember with absolute certainty, but my impression is that floor of the hall has a good rake (a pronounced slope). Perhaps a more regular patron of the hall would be able to confirm if this an accurate impression?
Top

I wouldn't think the tickets would be so expansive, but what the heck, I did pay 140 euros to be sitted on the 10th row in Tours which was a huge place, I would pay 199 euros to see LC in a 2200 seats concert hall (not 3000 as I first thought)
Catergory 2 would still be ok, but I wouldn't recommend category 3, as it would be quite high and far from the stage and from what I remember, there are some pillars here and there, and if you're unlucky, you may end up behind one of them!
I'm going to see Elvis Costello there at the end of May, I will have a closer look if some of you want to (LC tickets might be gone by then though)
I attach a layout of the Olympia I found on the net
hope this is helpful 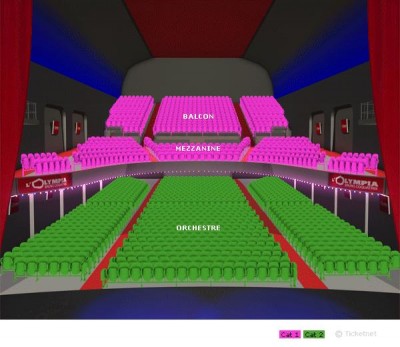 I was at Olympia two years ago. We were on the forth row left-hand side facing the stage ... the person next to me was taking photos and the continually lit-up camera screen was distracting.

much better view than down at the front ... but not so easy for placing a rose.
Top

Hi Harald,
In 08 I was in 4-5 row mezzanine on the left side, next to the corridor. Perfect sound, perfect silence, little "emotion", good view, but a little far and high. Probably first mezzanine rows will be better than back rows downstairs.
Judy I was there the day Sarkozy attended!
Hope it helps!
2008 Paris. 2009 Barcelona. 2010 Marseille. 2012 Ghent. Verona. Barcelona. Lisbon. 2013 Antwerpen, Berlin, Pula.
Top

Can some of you please read the original post again and take in what I was attempting, perhaps badly, to put across.

The post is now being turned into who can afford it, who can't (and sorry for those of you who come under that "label") those who can't really afford it but will still be going and others that are going and want to know where to sit to save money!!

I am sorry but my point was how many L.C fans, namely the younger fans who are struggling here in France (and no doubt in other places in Europe) the less well off fans and those who can only dream of paying such exorbitant prices. Good for you if you are going to Paris, I sincerely hope you enjoy the gig, I just don't see what the management were thinking of when they chose Olympia and the prices that they were going to set. Perhaps they believe all LC fans are loaded and sod all those fans who wouldn't be able to afford to go. Sadly I don't think that kind of thinking stands up alongside the name of Leonard Cohen and possibly all most of us think of, whenever his name and works are mentioned...... does it?
I guess it all started for me sometime around Christmas 1967 and now, goodness me, it's.........2018 and over fifty years later.
No one ever listens to me. I might as well be a Leonard Cohen record.
Neil from The Young Ones
Top

I was 2009 in Prague, first row.
Price was about 220 Euro/seat. But there was little to drink and eat
(maybe VIP places). So I think once in life you can pay this.
Hope I will get tickets for this great event, and see some of you!!

Yes of course, some can but many won't be able to attend due to simply not having the money to do so. I quote again briefly from earlier, the lad my Daughter saw as exuberant until later I told her the prices and he just deflated. I bet the rest of the poor lads day was pretty awful. So please don't ever think that "once in life, you can pay this", I wish that were true but the fact is, many true and genuine fans won't be able to afford to go to Paris to see L.C and that is surely not what being a fan of LC is about, is it? I feel that surely there has to be cheap tickets somewhere in a venue, especially in a major city like Paris where many people can get to. I don't sit easy with the thought that it may end up in dress suits and formal wear for the ladies, whilst the rest look through the window in awe of the well dressed people within. Added to that I won't mention Las Vegas again !!

OK, hands up, yes it was rather OTT but hey, you cannot write all that LC has written for many a long year and then see it all end like this

I guess it all started for me sometime around Christmas 1967 and now, goodness me, it's.........2018 and over fifty years later.
No one ever listens to me. I might as well be a Leonard Cohen record.
Neil from The Young Ones
Top
Post Reply
40 posts