Who is Patrick Leonard?

Who is Patrick Leonard?

by Steve Wilcox
Who is John Galt? Who is Partick Leonard?

by tomsakic
Well he had his old site on that URL few days ago... Interesting. 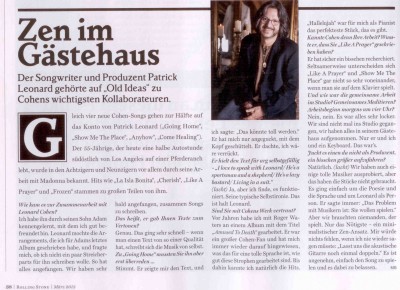 Interview with Patrick Leonard in the German edition of "Rolling Stone".
(Click on the pic for a bigger view!)
(Thanks to Andrea in Verona..)

by Anthony AY
Hi together

As a Pink Floyd fan, I remembered that Patrick Leonard was the co-author to one of the best songs on the 1987 album "A Momentary Lapse of Reason" and that he also contributed to the Roger Waters album "Amused to Death" in 1992. Until today the last two works that have still some of the old magic of Pink Floyd. So that is certainly an excellent reference.

In the article Patrick Leonard mentions that Roger Waters holds the lyrics of Leonard Cohen in highest esteem. Might have surprised me years ago, but by now I know that so many artists adore the beautiful songs from Leonard just as much as I do. And whatever one may say about the music: Roger Waters is one of the best writer of song lyrics next to Leonard Cohen.

by 4everenlightened
I have just found this site, and now registered. Been a fanatic of LC since the late 70's, and thoroughly enjoyed his last concert in Sydney last month. I have about 15 songs in my head, and currently learning 'Going Home'. The question and responses have probably been canvassed many times, but rather than try to find them, and mindful that this is my first 'Post', I am wanting to know if anyone knows if the song is about himself or perhaps the co-writer, Patrick Leonard?

I'm not sure whether I understand your question correctly, or whether I'm just making up a set of stupidities.
That's why I prefer to re-phrase what my mind makes out of it, and then answer that re-phrased question:

When Leonard Cohen says about some "Leonard" that:

"He's a lazy bastard"
"he does say what I tell him"
"he just doesn't have the freedom / the cojones / to refuse"
"he only has permission / to do my instant bidding",

and this not in a private conversation, but in a song on an actually published album, naming the "Leonard" in question — is it then possible that he might be referring to any other "Leonard" than himself?

And to this re-phrased question, which might be totally different from your real one, my answer is: No, that is not possible.

(Please do correct me if I misunderstood.)

by Jean Fournell
And here Patrick Leonard about the matter:

But for "Going Home" you first had to persuade him...
Correct. He showed me the text and I said: "That could be great." He just looked at me, shook his head. He thought I was crazy.
He considered the text pretty much selfsatisfied — "I love to speak with Leonard / He's a sportsman and a shepheard / He's a lazy bastard / Living in a suit."
(laughs) Yes, but I find it works. His typical self-irony. That's the ways Leonard is.

(End of the second and beginning of the third column of the interview above, posted by jarkko)

by alb123
I, too, first became aware of Patrick Leonard because of his contribution on Pink Floyd's 1987 album A Momentary Lapse of Reason. When he was brought on to Co-Produce Roger Waters' solo album Amused to Death (1992), I knew that he must be good. Roger isn't going to bring anyone but the best into his recording studio. So, when I learned he was going to be involved with Leonard Cohen's Old Ideas album, I was excited to say the least! I wasn't disappointed either. Old Ideas had to grow on me, but grow on me it did. After a couple of years of analyzing the album, I feel it is classic Leonard through and through. Unfortunately, I don't feel the same about Dear Heather, but that's for another discussion on another day...