Leonard Cohen shows there's life in the old dog yet

Leonard Cohen shows there's life in the old dog yet

"After some prompting from Cocker, he finally divulged: "It's just the song that allows the light to come in. It's the position of the man standing up in the face of something that is irrevocable and unyielding and singing about it. It's the position that the Greek Zorba had – that when things get really bad, you just raise your glass and stamp your feet and do a little jig and that's about all you can do."

Songwriter on Old Ideas, his first album in eight years: 'This record invites one to be swept along, even if you have written it' 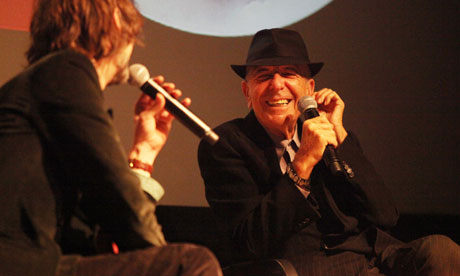 
His detractors may sarcastically call him Laughing Len, but Leonard Cohen kept a roomful of journalists entertained on Wednesday night as he launched his first album in eight years.

"How is it for you to listen to your own records?" asked onstage interviewer Jarvis Cocker after the album, Old Ideas, had been played.

"I wasn't listening," said Cohen. He went on to say that he did keep an ear out to see whether he had "ratcheted it up to the right degree of excellence. But mostly I was wondering if I myself could be swept along with it. This particular record invites one to be swept along with it even if you happen to have written it yourself."

Cohen's tones have become even more sepulchral with age. "We have to mention the voice – its seems to have got even deeper," said Cocker. "Do you think there's a bottom it can get to or can it go all the way?"

"It's what happens when you give up cigarettes, contrary to public opinion," he told Cocker. "I thought it would destroy my whole position and my voice would rise to a soprano." He joked that his aim is to take up smoking again at 80, so if he continues to tour, "I can smoke on the road".

Old Ideas proves that Cohen's long-term preoccupations with sex, death and salvation have endured. The inside cover features a drawing, by Cohen, of a naked woman and a skull.

The 77-year-old said that being a songwriter used to be popular with the opposite sex: "It was agreeable to have some kind of a reputation or some kind of list of credentials so you didn't have to start from scratch with every woman you walked into. Now it doesn't really matter one way or the other."

Cocker said that he had always been impressed with the "intimacy" of Cohen's work.

"You know, you just work with what you got," said Cohen, after a pause. "I always felt I was kind of scraping the bottom of the barrel trying to get the song together. I never had the sense that I was standing in front of a buffet table with a multitude of choices. I felt I was operating in more like what Yeats used to say was the 'foul rag and bone shop of the heart'."

He persistently rebuffed Cocker's attempts to decode his songwriting, warning him: "We've got to be careful analysing these sacred mechanics because somebody will throw a monkey wrench into the thing and neither of us will ever write a line again."

He said that songwriting involved "perseverance, perspiration, but also a certain kind of grace and illumination."

Cocker asked that as Cohen's publishing company was called Old Ideas, was it something he'd always wanted to call an album?

"You know, I don't have that many ideas," jousted Cohen.

"In another song, Come Healing, there's a line 'the penitential hymn' and it struck me that that could work as a label for a lot of your songs," Cocker persisted.

"I'm not sure what that means, to be honest," responded Cohen, to guffaws from the audience. "Is the penitence appropriate to God or to man? Who's to blame in this catastrophe? I never figured that out."

Cocker also asked about the song Banjo, which uses the image of an instrument floating in the sea. "The banjo can be a funny instrument," he said.

"It's hilarious," Cohen deadpanned, after a pregnant pause. "If it was a Stradivarius that wouldn't be so interesting."

"The sea would be full of art dealers plunging in to rescue it," he concluded.

Cocker responded by asking Cohen if he realised 'banjo' was Sheffield slang for a sandwich, since the person eating it brushed crumbs off their jumper with a strumming gesture.

The Pulp frontman finished by asking how Cohen felt about being awarded the PEN New England award for literary excellence in song lyrics.

"The thing I liked about this award was that I'm sharing it with Chuck Berry," said Cohen. "'Roll over Beethoven and tell Tchaikovsky the news' – I'd like to write a line like that."

Once questions were opened to the floor, Cohen revealed that he is likely to tour after the album's release, despite fainting on stage after a bout of food poisoning in Spain two years ago. The singer said he had been "invigorated and illuminated" by his last tour, which took in 247 shows over two years to huge audiences and ecstatic reviews.

Before he'd started the tour, Cohen said, "I hadn't done anything for 15 years. I was like Ronald Reagan in his declining years. He remembered he'd had a good role – he's played the president in a movie and I felt somewhat that I had been a singer. Being back on the road really re-established me as being a worker in the world and that was a very satisfactory feeling."

The tour had been prompted by Cohen's precarious financial situation. The singer sued his former manager for stealing £2.8m from his retirement fund while he was on a five-year retreat in a Zen Buddhist monastery. However, Cohen said: "When I finished the tour I didn't feel like stopping, so I wrote the record." He added that a further record and tour were likely.

When asked whether having two grandchildren made him think about his artistic legacy, Cohen said: "I cannot associate those little creatures with any larger idea such as a legacy. It's just a delight to be in the presence of this amazing expression of family destiny."

Last February, Cohen's daughter Lorca had a baby with Rufus Wainwright, but Cohen denied that a duet with Wainwright was on the cards. "He can keep a tune and that puts me at a disadvantage."

Cohen's first album was released in 1968. Cocker told Cohen that he found the rudimentary nature of his guitar playing "touching", despite Cohen long being self-deprecating about it. The singer said that critics in England had initially been mean about him: "They said I knew three chords when I knew five".

He also revealed that he would never have written his first novel, The Favourite Game, in 1959 without his landlady in Hampstead, London, where he lived, threatening to throw him out if he didn't write three pages a day.

When asked how a new song, Darkness, tallied with his famous line in the 1992 song Anthem that "there is a crack in everything, that's how the light gets in," Cohen replied: "You've got me stumped there."

After some prompting from Cocker, he finally divulged: "It's just the song that allows the light to come in. It's the position of the man standing up in the face of something that is irrevocable and unyielding and singing about it. It's the position that the Greek Zorba had – that when things get really bad, you just raise your glass and stamp your feet and do a little jig and that's about all you can do."
We are so small between the stars, so large against the sky
Top
Post Reply
1 post • Page 1 of 1