Back from Paris with a huge migariane. Not because of 'bad vibes', only because of 'good vibes', but a lot of excitement(too much for me to handle without migraine:-)) A fantastic event, a beautiful album, very nice people like Maarten, Menno and Tisha and of course the best: a very very nice, handsome and modest man with lots of humor: Leonard Cohen. 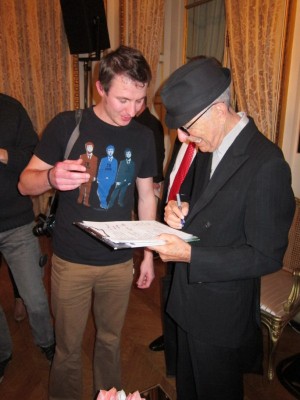 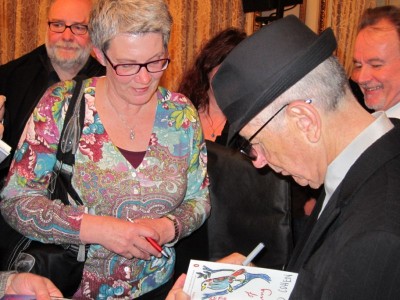 I didn´t kill myself when things went wrong
I didn´t turn to drugs or teaching
I tried to sleep, but when I couldn´t sleep
I learned to write.
I learned to write what might be read
on nights like this by one like me.

Ine,
Thanks for starting this thread. I'll try and write a small report later tonight, but I've only just returned from Paris now...

Fantastic photos of both of you. Thank you for posting them so quickly.
Looking forward to reading full reports.
Is that the ever present Mike Scoble on LC's right?

bridger15 wrote:Is that the ever present Mike Scoble on LC's right?

I am glad that LC was surrounded by many familiar faces and that both you and Ine were able to enjoy such exalted company.

Lots of quotations from Paris in this article: http://www.telerama.fr/musique/les-bonn ... ,77093.php
Here is the Google translation.


Monday, January 16 at night, in an elegant room Hotel Crillon in Paris, the venerable Leonard Cohen presented his new album, with humor and relevance Old Ideas (forthcoming January 30, 2012), followed by a gathering of journalists ( fifty from England, Spain, Germany, Denmark, Italy, Portugal, Israel ...) more or less hand-picked. Such is the privilege of the greatest artists to cut the endless days of meeting face to face, by simply a "friendly exchange" as a press conference.

Between pleasure to see and hear the Canadian poet singer in small groups, and frustration of being deprived of an exclusive meeting, more intimate and long-term collects the last thoughts of the most elegant and gracious interviewees, a man has refined the art of giving always a lot with restraint, never fully engage ....
Excerpts.

"Thank you for coming so numerous and so far to this listening. I do not would face while the disc will be released in order not to influence your reactions, be they of appreciation or rejection. Anyway, I know of no worse judge or critique my work than me. "

"The musical tradition in which I register exists in France but also in Europe forever. Here, I have nothing to explain. The presence and the rule of the positioning of text and voice are part of a European tradition, especially French. This is not the case in the North American music. "

"It's great to collect as much praise, encourage such respect. I can only feel good. The challenge is to respond other than to say simply "thank you". I live at the forefront of my life, I am not in a position to look back and analyze it. "

"I actually retired a few years in the Buddhist monastery of my friend and Master Roshi. Religion has nothing to do with my wisdom apparent. This is the result of the practice of great discipline. I think it's primarily the age where I can be a free spirit. As we age, it seems that most brain cells associated with anxiety tend to disappear. It is therefore more a question of age as neurons and religion. My Zen master Roshi, 104 years, is still untouched by the ravages of old age. It is an honor for me to be close to him, to attend. He never talks about religion. His teaching is not religious, he learns to observe and analyze the nature of things, the encounter between subjects and objects. His teaching is scientific. There is no question at home or in his monastery of God or worship. This is an introduction to the commitment to live within a community to pay attention to her feelings and those of others. No faith, no belief, just hard work every day. "

"We always learn. It never comes at the end of his own stupidity and incompetence. The opportunities are endless humiliation. I constantly confronted with the most intense self-criticism. "

"The album is called Old Ideas. This is just eternal themes that I have always been treated and that affect us all, I think. Ordinary, everyday questions, nothing more. "

"Depression is a serious matter. It is not that of the vexation caused by a failed tryst or a rotten weekend. Depression is the context in which installs a lifetime of anxiety: nothing is ever really all that we hope always falls apart ... But I am happy to announce that my chronic depression has come gradually dissipate. In any case, the past ten years, it never reappeared with the same intensity as before. With any luck, it will remain so. "

"I will say nothing of my report to the scene and the public. I never talk publicly about my intimate relationships. "

"I do not think a boycott of art. I do not understand. I believe that art is the only way to communicate with men. I played in Israel before 50,000 people. We made sure that the Palestinians can also attend the concert. All proceeds were donated to a relief fund for creative workshops, the transmission of traditional cultures. Surely this is a drop in the ocean, but that's something. The concert was fantastic, always very emotionally charged. But I think each of my concerts as a special event. Each affects me differently. "

"I have a lot of texts being prepared. I'm already working on a new album which I hope will come within a year. "

"For a long time, I did not feel entitled to sing the blues. But I feel I have recently received permission. Hence his presence on Old Ideas. "

"I love flamenco. I play my guitar ... even when no one is listening! I was privileged to hear some of my songs sung in Spanish by the late Enrique Morente. A huge innovative flamenco singer. Of Omega, an admirable drive means adapted my songs in flamenco. Including The Gypsy's Wife. It's upsetting. "

"Good songs have the ability to touch the heart in his pain and failures. But they also help with the dishes or serve as a backdrop for romance. They can do everything. They have the power to soothe, to give courage. "

"I am set in my old age, as a male to female (" Ladies Man ") would require a dose of humor. I concluded, somewhat against the heart, that I will die someday. It's sobering. I hope to do without being too morbid. I raise the dead, but in rhythm. I do not think much to the concept of reincarnation. But if I really need to come back to earth, while it is in the dog's skin for my daughter Lorca! "

To listen to two excerpts from the forthcoming album of Leonard Cohen.

I love this: « Je ne dirai rien de mon rapport à la scène et au public. Je ne parle jamais en public de mes relations intimes. »
"I won't say anything about my relation to the stage and the audience. I never talk publicly about my intimate relationships."
"We are so lightly here"
Top

Wonderful to hear such eloquent and interesting words from Leonard! This bit is very exciting: "I'm already working on a new album which I hope will come within a year." Leonard Cohen is spoiling us!

Would love to have been there. Presumably u both heard the album in full? Would love to hear a detailed review if possible...
Top

LisaLCFan wrote:Wonderful to hear such eloquent and interesting words from Leonard!

Some quotes:
Q: What will you do in your next life?
LC: I don't really understand that process of reincarnation. But if there is such a thing I would like to come back as my daughter's dog.

Q: I was wondering, you still learn a lot of things? In your line of work, talking about music, books, drawings or anything. The feeling that you can learn - that your voice can learn something for instance?
LC: Well, you're never free from your own stupidity.

Q: We're in the deepest crisis since 1929, the rich are getting richer, the poor poorer. What do you think about that?
LC: Everybody knows.

Very exciting to hear about the texts and new album he has prepared/is preparing! We've already heard about a second pressing or edition of the new Poems and Songs; I wonder if he is prepping an entire new book? It would be overwhelming to have another new album out within the next 6-8 months! and THEN he can go on tour

Hi,
If anyone needs a pm with more "details"

Maarten. Thank you for taking the time to post your transcription of some of the Q&A

I enjoyed it very much.

Down from its previous deliveries, garnished with synthesizers and drum machines, Old Ideas marks a welcome return to acoustic instruments in which guitar, piano and organ carve the lion's share. Photo Credit: JOEL SAGET / AFP

The Canadian poet and singer presented his new songs Monday as part of a press conference.

Old Ideas. Or, literally, old ideas. This is the title chosen by Leonard Cohen for his new collection of original songs, the first since Dear Heather, in 2004. Since then, the septuagenarian has made a spectacular world tour in 2008 and 2009, giving dozens of concerts, in particular to rebuild their financial health. He had been defrauded by his former manager while on a spiritual retreat in a Zen community.

This unexpected increase in activity was worth Monday we visit a rare Parisian Canadian. "I always believed that the tradition in which I speak, the song was particularly well understood here in France," he said after listening to the album. Before the assembly of journalists from all over Europe comfortably installed in a room of the Hotel Crillon, Leonard Cohen, 77, has demonstrated its great alertness. This is despite the grotesque flattery of Jean-Luc Hees, responsible for leading the meeting. "I am the judge the most ferocious of my own work" and said the writer and musician.

Down from its previous deliveries, garnished with synthesizers and drum machines, Old Ideas marks a welcome return to acoustic instruments in which guitar, piano and organ carve the lion's share. The timbre of increasingly serious singer is tempered by the interventions of female singers. More than ever, the text explores the hard love in its most spiritual. "It seems that with age, brain cells linked to anxiety die faster," he says, smiling.

The severity of the album is a nice counterpoint to the humor with which Cohen treats each question. "I came to the conclusion that I would eventually die," he admits with a smile, explaining that it would be a bit pathetic for him to consider himself a ladies man (Death Of A Ladies Man is the title his album of 1977).

"I do not really believe in reincarnation, but if it exists, I want to be my daughter's dog in a future life," he said. Thin and decreased with age in the physical, Leonard Cohen is obviously has a brain in good working order. He confessed to being already at work on a new album. "I want to finish later this year." And the rumors abuzz of a new concert series, perhaps even next spring.