The NY Times article above appears in the Arts and Leisure section of the Sunday, January 29 edition. It is accompanied by color photos of the album cover, and the Issermann photo of LC on a roof with fedora and guitar.

Takes up one half page.

Back side of that page is full page black and white ad for the cd or lp from J&R.

The following words and photo were in today's Edmonton Journal (I love what it says about Leonard's voice!):

Big picture: Hard to argue with the Canadian legend, still conjuring his musical magic at 77 years young. In Old Ideas, Cohen confronts his own mortality, with dense lyrics steeped in his unique brand of philosophy, spirituality and self-awareness. The fact that this is Cohen's best work in years indicates that, although he may be at ease with the passage of time, he has far from finished bestowing his poetic gifts upon us. The diverse instrumentation and musical styles (from hymns and blues to rockabilly twang and Gypsy jazz) will please fans tired of Cohen's recent dalliance with synthesizers and other electronic sounds.

Many critics are making comparisons, in theme and style, to Bob Dylan's 1997 renaissance album, Time Out of Mind. But Cohen is his own man, and his otherworldly, deep, rumbling voice - so unmistakable - still sounds like it can move mountains (at the very least, it will move hearts).

Forecast: Cohen may have Old Ideas, but they're damn good ones. TV may have The Voice, but Cohen IS The Voice. 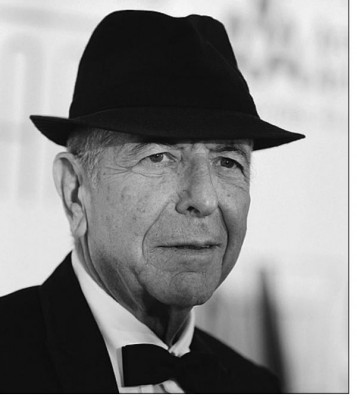 And two articles, both of them express their utmost admiration

Leonard Cohen – Old Ideas
“My experiences are all that I need for my songs”, the legendary Leonard Cohen confessed to the world press just before his twelfth studio album Old Ideas appeared last weekend.
Cohen came, spoke and conquered in Paris to mark that occasion: signs of life of the meanwhile 77-year-old Canadian are remarkable as such, but we’re definitely in for collective worship if they are of the traditionally high level of Old Ideas.
An album that can be described as new wine in old bottles. But quality wine it still is! An album, as befitting the old master, full of the most wonderful images, words and phrases. “I caught the darkness drinking from your cup / I said, ‘Is it contagious?,’ you said, ‘Just drink it up.’” It is about hope, about love, Cohen reviews, overlooks and still regularly wonders: why? He does so with minimal musical means. A sole, restrained organ here, a string instrument there. Some percussion, a few guitars, vocal backing from his regular accompanying singers the Webb Sisters. In self-restriction does the master reveal himself, as the Germans say. Old Ideas seems like an island of peace and classical beauty in a savagely swirling sea of modern music.

I will spend some more words. If one must use a silly term "literary rock" is Leonard Cohen's genre really thousands, yes I think I will rank him over the "other guy" who is also pretty good with words and music.

google translate.
http://www.morgenbladet.no/apps/pbcs.dl ... e=printart
There are many ways a man can serve his time
Top

Another one from Russia - http://www.kommersant.ru/doc/1861134
Kommersant is one of the most respectable papers in the country.
Roman aka Hermitage Prisoner
Top

This one is from the "Frankfurter Rundschau", "the" moderate left wing intellectual paper in Germany, from the 26th of January, and it covers a complete page in the feuillton. As always in recent years, the "FR" praises Leonard.


Note, that the picture of Leonard in the printed edition was a large one.

Love these reviews from the Winnipeg Free Press