Ask and answer questions about Leonard Cohen, his work, this forum and the websites!
Post Reply
39 posts

Steven wrote:I'm nearly certain that he's referring to the Arch of Titus.

Interesting. Do you think this because it commemorates the sack of Jerusalem? "Due to the depiction of the destruction of Jerusalem and the desecration of the Temple, Jews refuse to walk underneath the arch to this very day." But are there any flags there? I don't think so.

... but again, no flags, and the original probably not marble.

But here's an intriguing candidate. In London we have an arch which is actually called Marble Arch and is defined as the very centre of London (all measurements to other cities begin and end here). Furthermore, less than a hundred yards away is a branch of the National Bank of Greece, which is the most likely location for Leonard's famous encounter with the tanned bank-clerk which led him ultimately to Hydra. So he would have known Marble Arch.

And all around Marble Arch are flags ... these days, of the EU nations. 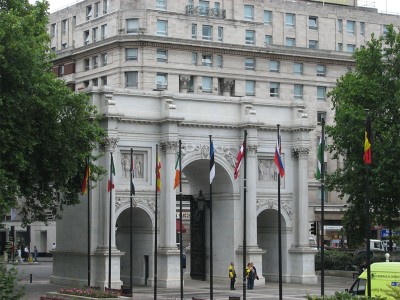 I saw your flag near the Marble Arch

Yes, because of the sacking of Jerusalem. The Arch of Titus has a menorah on it. The menorah is symbolic of the Nation and flag-like.
No expert on arches, but believe that the Arch of Titus was an important influence upon latter arch builders, perhaps including those of
the arches you spoke of. Seeing those could have reminded Leonard of the depiction on Titus' glorification of destruction/pillage.
I can't remember if Nadel's bio provided any info. on the Arch of Titus and Leonard's Hallelujah and have returned my borrowed
copy. Good to read your post with your thoughts on this. Maybe Leonard's creative process with this incorported some or all
of the arches and elements we've spoken of here.
Top

I've just seen the Iceland video for the first time.
Halleluja's never been my favourite LC song but this performance is literally breathtaking ...
Silence
and a deeper silence
when the crickets
hesitate
Top

I wonder why he wandered into the bank of Greece in particular?
Top

Someone just posted the question on "Yahoo Answers" -
http://answers.yahoo.com/question/index ... 336AARAnhb

So far there are two responses -


have you heard that song?

It's beautiful but so so sad. Just listen to it, the song will stir your emotions.
Source(s):
http://www.youtube.com/watch?v=WJTiXoMCp…


It's just got a rare beauty you don't often find in music. I break my heart everytime i hear it, and i still don't know why.

And I think that both people who responded seem to indicate that there is something about Leonard Cohen's "Hallelujah" that touches people in a way that they have no words to describe. It just does.
Top

Re the 'marble arch' lyric - as much as I'd love to think he was referring to London's Marble Arch, I always assumed it was the generic concept of the triumphal arch built to celebrate victory rather than a specific arch intended, though the Arch of Titus certainly has overtones. It's all one big mixed metaphor of conquest and defeat - staking your flag/conquest, a triumphal arch and a triumphal/victory procession.

As an aside - any Roman general granted a triumphal procession would have to have a slave standing next them throughout, whispering in their ear 'remember you are still mortal' - I've always loved that.

Hallelujah! It's been deleted again!!!!!!

however - is this the clip to which people are referring?

i seem to remember leonard singing this song on the same set with a choir comprising children.

or is my memory muddled?
Top

sebmelmoth - Yes, this is in fact the same video. I have never seen one with a children's chorus. Would love to see it, if someone could find it.

I'd just like to add a little information on Georg Stefan Troller - he is a Vienna-born Jew who was able to flee the country in 1938 and eventually made it to the USA. He became a US soldier participating in the war, and later studied in the US. He eventually went to Paris (where he has been living ever since, but stuck to his American citizenship) and within short became THE Paris correspondent to the German Broadcasting Net. His interviews - from stars of all categories to jailbirds, streetcleaners, whores - are legendary. He's "a deep one" but always tongue in cheek or even resorts to a little imperticence as proven by his notorious interview with Woody Allen. He's done more than 150 TV docus and also full-length cinema films and I don't know how many books, one of these includes an earlier interview with Leonard Cohen - (the book is in German, I'm afraid, because - although obviously fluent in English and French - German is his mother tongue and "home of his thoughts").

So, when in the above docu he covered Leonard Cohen, a legend met a legend - I'd say. He's now 90 years old, looking like he will be going strong for another 20 years and his mind seems in the best of shapes.

So here's to Leonard Cohen and Georg Stefan Troller! May they both stay around for many years!
Top
Post Reply
39 posts