Ask and answer questions about Leonard Cohen, his work, this forum and the websites!
Post Reply
34 posts

From YouTube vids it looks like LC went back to wearing the doublebreasted pinstripe suit in Philadelphia; the one he was wearing in the first leg Canada/Europe 08.

Hasn't he been wearing the single button suit for most of this North American tour?

You're so right BV. The kneeling is awesome but it must be hard on the suits! He's doing it more than ever it seems.

Close-up is an understatement. You can practically smell his aftershave when you open this pic. Warning: this picture is ENORMOUS.

And then there is The Visible Bead of Sweat. Right between the crow's feet and the sideburn. Not that I've been staring at it for the last 15 minutes or anything, no siree.

Now you have discovered what's on his bolo tie, I suspect nothing less from you than to find an explanation for all the symbols on it and why Leonard Cohen is wearing this one specifically.

Start your detective work! (and let me know ASAP)

mnkyface,
I couldn't resist doing some research myself... 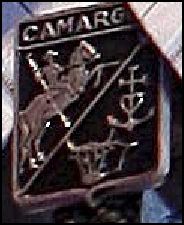 It says "Camargue" on top, which is an area in the south of France (http://en.wikipedia.org/wiki/Camargue) so I googled some Camargue symbols and came upon this one:

The Gardians Cross, symbol of the Camargue 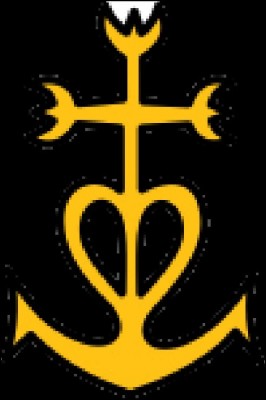 
I have to stop my research now, because the kids are asking to go to the park to try out their "Heelies"...

Thanks Maarten! I found this similar link: http://symboldictionary.net/?p=2288

The horses connection is fascinating too:
http://en.wikipedia.org/wiki/Camargue_(horse)

And I found this alarming article, though it is from 2000 so hopefully the situation has righted itself:
http://www.telegraph.co.uk/news/worldne ... orses.html

This is all so fascinating. Maybe this should be moved out of NA Tour to a more general category! Learning of Leonard's interest in the Camargue makes me rethink so many of his lyrics involving horses, the sea, etc...

Someone must have been doing some shopping in the south of France because I noticed that at the next concert his bolo was just the Camargue cross. Very nice. Hmmm, perhaps special gifts?
Top

I noticed the second one in photos from the Molde concert!
Top

At least to my presbyopic eyes, these three bolo tie slides look different from one another and different from the one already depicted. And, one more to follow in separate post.
Last edited by DrHGuy on Tue Oct 13, 2015 4:07 pm, edited 1 time in total.
Cohencentric http://Cohencentric.com
Top

Oops, I originally thought this bolo tie slide shown in the photo used in the Rolling Stone interview seemed different from the others already pictured, but now I see it appears the same as the one worn in the Beacon concert. My apologies.


For what it's worth, the Mother Jones wrap-up of Coachella describes Leonard Cohen's bolo tie as "cheeky."

Why does he look like an illustration for the dictionary definition of “dapper” wearing a double breasted jacket while 97% of the men that don them (including Dave Letterman, who wears one almost every night on his show) resemble nothing else as much as a corpse being fitted for a shroud?

Finally, I suggest the definitive insight on the Leonard Cohen fashion line would be the sagacious and astute observation made by that perspicacious pair of musical philosophers, ZZ Top:

They come runnin’ just as fast as they can
‘Cause every girl crazy ’bout a sharp dressed man.

Now all the tie slides are starting to look the same and different on alternate takes. This slide from the Nice show seems distinctive - or I may just be going psychotic. 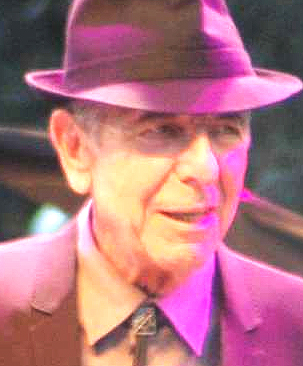 I've been reviewing the various photos and think there are only 2 of the Camargue bolos...the one with simply the cross, and the other which has several symbols. As always though, with Leonard, he has impeccable good taste!

All the best,
Diana
Top

Hi,
I moved this topic to the "Comments and questions" section.